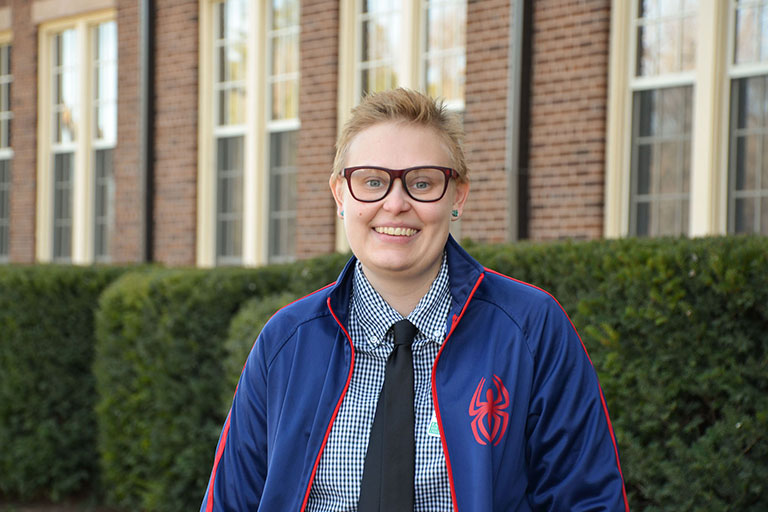 Her professors strongly encouraged her to submit her writing for the conference. To be part of this conference, writers must be selected. She submitted her work and took the opportunity to network with scholars, writers and others interested in popular/American culture. The organization's mission is to "promote an innovative and nontraditional academic movement in the humanities and social sciences" (www.southwestpaca.org).

Jessie has always had an interest in English and, as a child, she dreamed of becoming a writer. She found that the English program at ENMU "gives me the breadth I need to study literature and work on my writing skills."

She chose to enroll at Eastern due to the cost and the faculty.  "Well, there's the consideration of cost," said Jessie. "But what ultimately drove me here for graduate school was the fact that the faculty is so open and helpful."

She explained that Dr. Carol Erwin, Dr. David Sweeten, and Opal Greer have guided and helped her. "If I have a question about the class I'm teaching or one that I am enrolled in I can go into one of their offices or email them at any time and get a helpful, lengthy answer.

"My decision to come here for graduate school is one of the best that I've ever made," she added.

Jessie currently works as an assistant editor for the El Portal and also helps students at the Writing Center in the Jack Williamson Liberal Arts Building with grammar, punctuation, style writing and more.

The graduate student, who participates in the Japanese Animation Research Club, loves to read and write. "I can slip into a new world and just disappear without having to spend crazy amounts of money on travel," she said. "I remember writing my first story in kindergarten about a kid archaeologist who saved the world. I think I just enjoy being able to create my own stories and write narratives that speak to me and others.

"I also enjoy writing because it's something I can do anywhere. If I don't have my laptop, I can just take out a notebook, start writing and then transcribe it later. I can even use my tape recorder if I don't feel like writing. It's just a relaxing and enriching activity that I can do no matter what is going on," she explained.

"I can also create completely new worlds from scratch. I just take out a piece of paper, start with an idea and start drawing out a mind map or using computer software to create an actual map of a place. I can have the universe sketched out and ready to be inhabited soon."

Jessie's favorite place on campus is the Campus Union because "it's full of life. If I want to see people I know, I can sit there and study but also talk to people that pass by; and there's coffee close by."

Her favorite part about being a Greyhound is the close community. "If I need help with something, or get sick, someone is always there and willing to help out," said Jessie.

Her favorite English course so far is "Medievalism and Fantasy Fiction." "I am learning so much about the tropes of that genre, and it's really one of my favorite choices to read," she said.

She encourages Greyhounds interested in pursuing a degree in English to read. "If you want to be an English major, be prepared to read. Read, and enjoy reading. It may seem like a lot, but you'll get through it."

Her career goal is to become an "inspiring literature professor and writer. I hope to reach students and get them excited about reading."

Jessie, who has two brothers and was "raised all over the world" since her parents were stationed at various Air Force bases, enjoys watching "Star Wars" and "Lord of the Rings" and playing video games like "Smite." She also plays the guitar.