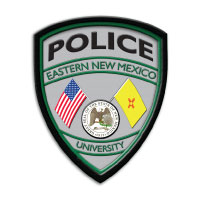 The ENMU Department of Public Safety (ENMU DPS) has prepared the following links as a public service to you. We have compiled some suggestions to prevent you from becoming a victim of a crime.

If You are a Victim of a Crime

When you are an ENMU student, if you are the victim of a crime while at ENMU, report it immediately to the ENMU DPS. In case of emergency, call 911. For non-emergencies, call 575.562.2392.

Prompt reporting and specific information will increase the chances of solving your case. An ENMU police officer will be dispatched to meet with you and obtain all of the necessary information.

IF evidence from the crime is still intact, please do not move or destroy it. This is especially important in sexual assault cases. Note: Showering, changing clothes, or grooming can destroy vital evidence.

Many students worry about reporting crimes to the police because they do no want to testify in a trial. Victims are nevertheless encouraged to contact ENMU DPS so they can be made aware of other services (counseling services, medical treatment, etc.) that might lessen the trauma of the incident. If victims do not wish to pursue criminal charges, their wishes will be respected.

If you are an ENMU students and you are a victim of a crime you may also pursue recourse through the ENMU Student Judicial System. While this is not a substitute for the criminal justice system, it affords you the opportunity to have your side heard in a less formal environment.

If an accused student is found to have violated the Student Code of Conduct, he or she may be subject to disciplinary action, up to and including expulsion from ENMU. Both the victim and accused will be afforded the same opportunities within the student judicial process, and both shall be informed of the outcome of any campus disciplinary proceedings alleging sexual assault.

If you need more information or have questions, please call the Office of the Vice President for Student Affairs at 575.562.2221. You can also get more information in the ENMU Student Handbook or through the ENMU DPS

Mark or engrave all valuables (including textbooks), and keep a record of these in a safe place. Include their make, model, and serial numbers whenever possible.

When you are an ENMU Student, if there are any problems with your room that may affect security (such as doors that don't lock well or windows that open easily), let your RA or housing director.

If you live on campus, you should register your bicycle with the ENMU DPS and always secure it to a bike rack on campus with a quality lock.

Lock the doors and windows to your room and your vehicle every time you leave. Do not leave valuables where they can be easily seen by someone passing by, even if it is just for a few minutes.

Always be aware of your surroundings and of any strangers near you. If someone is acting suspiciously, move away toward large groups and well-lit areas.

Alcohol and drug use can reduce your ability to recognize a dangerous situation and your ability to defend yourself. If you are going to drink alcohol, do it legally, responsibly, in a safe place, and with people you trust.

Eastern New Mexico University offers counseling services free of charge to students at Counseling and Career Services. Our counselors are well-trained professionals and can help students with a wide range of problems.

As an ENMU student, if you wish to seek counseling services off campus, ENMU DPS has contact information available for off-campus options. ENMU DPS can also put you in touch with the SANE (Sexual Assault Nurse Examiner), Shelter, Victims' Assistance, the Counseling Center, and numerous other public and private counseling services.

Many of these are free of charge or are offered on a sliding fee scale.

If you have concerns or need specific information, call the Office of the Vice President for Student Affairs or ENMU DPS.

ENMU works specifically toward the goal of reducing the incidence of sexual crimes and providing better services for those victimized.

Special assistance for victims in changing academic and living arrangements is available through the Office of the Vice President for Student Affairs.

Additional services exist throughout the community to deal with special problems. As an ENMU student, you can contact the ENMU DPS with your needs for referral to the appropriate people or organizations.

The issue of sexual assault and other sexual misconduct is at the forefront in universities nationwide. ENMU has a specific policy prohibiting sexual misconduct and will assist victims in seeking counseling (available through the Counseling Center Services or several off-campus organizations), obtaining medical treatment (available through La Casa ENMU Student Health Services and Mental Health Resources, as well as some private physicians), changing room assignments, making academic changes, and in any other way possible, including criminal prosecution through the District Attorney's Office (if the victim so desires).

Students, faculty and staff, and visitors are reminded they can contact ENMU DPS for assistance at any time, and do not have to file an official police report in order to be helped. If a report is filed with the ENMU DPS, it will be fully investigated with the findings being referred to the District Attorney's Office for prosecutorial decisions.

Crime occurring off campus involving students or chartered ENMU organizations is reported to and handled by the Portales Police Department, the Roosevelt County Sheriff's Department, or other appropriate law enforcement agencies having jurisdiction. While ENMU DPS assists the other agencies when asked pursuant to mutual aid agreements, the reporting and tracking of crime is done by the agency of primary jurisdiction. Anyone wanting specific information on off-campus crime should contact the appropriate agency(s).

Does Everybody Do It?—All Students

How Much Is Too Much?

Sometimes people wonder: Do I drink too much? Am I in control of my drinking? Am I setting myself up for drinking-related problems? The following questions are designed to help you identify drinking habits that may cause problems for you. Answer honestly; no one but you will know the score.

If you answered yes to one or more of these questions, stop and think for a moment. You may be doing yourself some harm. Maybe it's time to talk to someone, get some information. People at the student health or counseling center will be happy to give you confidential information.

A good rule of thumb to keep in mind: "What causes a problem is a problem."

Top Ten Ways To Turn Down A Drink

One of these should work for you, whether you're shy, confident, or just looking to be really cool!

Saying No With A Different Twist

Leave the door open for the future.
"Not now, but maybe later"
"Another time"

With a pretend friend ...
"Sorry, I promised someone else that honor."

With an attitude ...
"You know what your problem is? You think too much about others. Can I get you another drink?"

Have a quick one liner, like ...
"No thanks, I'm still a little partied out from the last party."
"Sorry, I am getting ready to leave out of here."
"No thank you, I'm allergic to alcohol and it's not a pretty picture."

Here's a checklist to remember when you party and encounter someone who is semi-conscious or unconscious:

What Not To Do

You're of legal age and you plan to drink

How Does Intoxication Occur?

Almost all of the alcohol consumed is metabolized by the liver at a rate of about one half ounce of pure ethyl alcohol per hours (about the amount contained in one drink). This rate will vary from person at which it is metabolized. You're probably going to find yourself starting to feel the effects of drinking too much to quickly. Alcohol continues to circulate through all parts of the body until the liver has had enough time to work. That tipsy feeling occurs because the brain is the organ most affected by the alcohol you consume.

Always make and measure your own mixed drinks in order to control what type of alcohol—and how much alcohol—you are drinking. This way you are responsible for what's in your drink. Drinking games, slammers, punches or weird concoctions are not the way to go; you just can't control what you're going to get. There are some folks out there putting some pretty funky stuff in drinks these days, so watch out and know who mixed you what.

Stay Active When You Party

Keep active at a party. Don't just sit and drink all night. If you keep active, you will probably drink less and pace your drinking. This will help keep you at a safe and moderate level. And monitor your own drink. If you put it down to go do something, don't pick it up again. Who knows what's in it now?

Sexual assault is a crime of violence, not sexual passion. It is meant to degrade, humiliate and control. The attacker can be a stranger or someone known and trusted. It can happen to anyone, at any time, at any place. The trauma of being assaulted is a shock from which many victims never fully recover.

No matter which form it takes, sexual assault is as much a problem today as it has been throughout history. While those most at risk are people between the ages of 10 and 29, it can happen to anyone at any age.

There is no portrait of a "typical" rapist. These men (in most cases), like their victims, are all ages and come from all racial and social backgrounds. They can be college students, married, doctors, teachers, or unemployed transients. Most are not crazy or deranged people looking for sex. In fact the majority of offenders are highly intelligent, married with families and have ready access to consensual sex; but they rape to control, dominate and humiliate the victim.

Myth: You cannot be assaulted against your will.
Assailants overpower their victim with the threat of violence or with actual violence. In cases of acquaintance rape or incest, an assailant often uses the victim's trust in assailant to isolate the victim.

Myth: A person who has really been assaulted will be hysterical.
Survivors exhibit a spectrum of emotional responses to the assault: calm, hysteria, laughter, guilt, anger, apathy, shock. Each survivor copes with the trauma of the assault in a different way.

Myth: Assailants are usually crazed psychopaths who do not know their victims.
As many as 80% of all assaults involve either a known acquaintance, or someone the victim has had contact with, but does not know personally.

Myth: Gang rape is rare
In 43% of all reported cases, more that one assailant was involved.

Myth: Many women claim they have been sexually assaulted because they want revenge upon the man they accuse.
Only 4-6% of sexual assault cases are based on false accusations. This percentage of unsubstantiated cases is the same as with many other reported crimes.

Myth: Persons who dress or act in a sexy way are asking to be sexually assaulted.
Many convicted sexual assault assailants are unable to remember what their victims looked like or were wearing.

Myth: All women secretly want to be raped.
While women and men may fantasize about being overpowered during sexual relations it is usually with a person of their choosing, who they trust. They are in control of the fantasy. No one wants the physical and emotional pain caused by a sexual assault.

Myth: It is impossible to sexually assault a man.
Men fall victim for the same reasons as women: they are overwhelmed by threats or acts of physical and emotional violence. Also, most sexual assaults that involve a male victim are gang assaults, by other males.

Myth: If you do not struggle or use physical force to resist you have not been sexually assaulted.
If you are forced to have sex without your consent, you have been assaulted whether or not a struggle was involved.