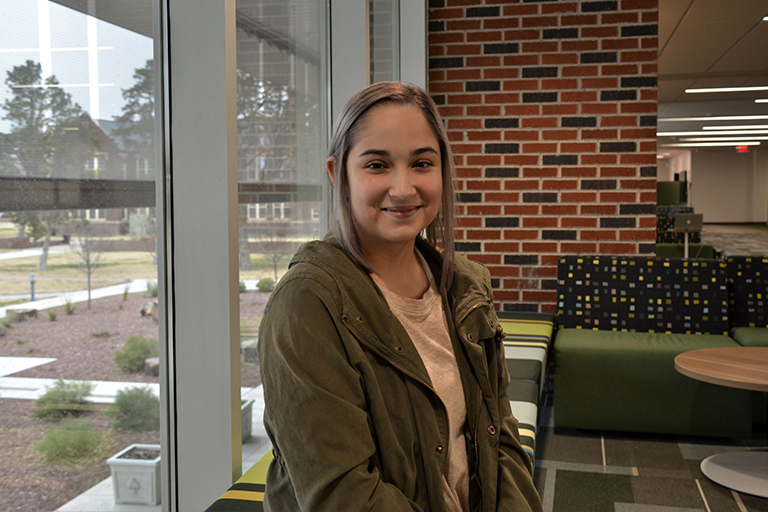 Morgan Juarez is a freshman at Eastern New Mexico University majoring in biology with an emphasis in pre-medicine. With this degree, Morgan hopes to pursue a career as a cardiothoracic surgeon.

"I have always enjoyed watching television shows about doctors. In eighth grade, people asked what I wanted to be, so I decided anything to do with medicine. I want to help as many people as I can. The world can always use more doctors," she says.

To other students starting college in the field of biology, Morgan gives the advice: "Do not procrastinate, go to class and be sure to pay attention."

Morgan received several scholarships from Eastern, which influenced her decision to attend the University. She shares, "When choosing a college, I visited ENMU's campus, and that's what sold me. The campus was beautiful and just the right size. Everyone was so friendly and still is to this day. I'm very glad I chose ENMU. I love being part of such a great community."

During her first semester at ENMU, Morgan has enjoyed having class with Dr. Michael Vandewege, an instructor of biology. Her favorite course has been "Biology Laboratory," which offers hands-on learning activities in the lab.

On-campus, Morgan is a member of the Associated Students Activities Board and Chi Omega. She works three jobs: two on-campus and one at a bakery in Clovis. In her free time, Morgan enjoys watching movies, crocheting and shopping.

The freshman's favorite place on campus is the Golden Student Success Center, where she can "study, talk to people and even eat."

Morgan was born in Hale Center, Texas, and was raised in Plainview, Texas. She has two younger brothers, Kylar and Clayton. Her mother is employed by Walmart distribution, and her father works at McCoy's and runs his t-shirt business.