William "Bill" Moyer produced a documentary titled "A Brief History of Windmills," which was one of four finalists at the annual fall regional conference of the South Central Broadcasting Society.

William "Bill" Moyer and Johna McClelland submitted video documentaries in the spring for the student production competition sponsored by SCBS. They competed with students from universities across the south and southwest.

Bill produced a documentary titled "A Brief History of Windmills," which was one of four finalists. He received a certificate of recognition.

Johna produced a documentary titled "Music: A Family Affair," which was one of seven semifinalists.

Bill's documentary, which can be viewed here, focused on water-pumping windmills and electrical turbines in Roosevelt County in New Mexico. The American Wind Power Center in Lubbock, Texas, was included for close-up images and supplemental material to fill out the film. He frequently traveled on New Mexico highways with his camera and "shot footage of every windmill I spotted."

He submitted his film to the SCBS conference after completing Dr. Darrell Roe's documentary class and was announced as a semi-finalist with Johna in September. It was the first documentary contest he has entered.

"The SCBS convention was an amazing experience," said Bill. "The first function was the tour of NewsChannel 10 in Amarillo. The tour was very interesting, and I was amazed how well the broadcast production training at Eastern prepared students for work at commercial stations."

The tour was followed by a presentation from keynote speaker Lionel Cartwright and a buffet-style dinner with a live DJ. The next morning, they listened to a speech from Michael Lange, a Hollywood director. They also went to several panels and workshops before the final awards ceremony, covering topics like social media, radio and television broadcasters.

"A Brief History of Windmills" was not Bill's first documentary; he has made five or six projects for various classes at Eastern. They were "simple projects ranging from two minutes to ten minutes to learn how to edit video and audio."

He was "drawn to creating documentaries" because he finds them to be "informative and educational."

In his student job in the master control room at KENW, Bill watches many programs and prepares programs to broadcast. He sees "most of the documentaries that come into the station for broadcast. Also, I have the option of studying them frame by frame if I spot a technique that looks interesting. My favorite documentaries are NOVA and Frontline."

Bill has another documentary in the works about the Blackwater Draw and Mu Alpha Nu Anthropology 15th annual atlatl dart throwing contest on Oct. 28 at the Blackwater Draw archaeological site. His plan is to produce a 26-minute long documentary to broadcast on KENW and offer it at no cost to affiliate PBS television stations. The documentary will cover the competition and include a lecture from Dr. Brendon Asher at the Interpretive Center, which houses the excavation of bones and artifacts dating back to 13,000 years, and an interview with Dr. Heather Smith, who is an expert on Clovis points and stone tools.

The broadcast production major, who is working on a minor in digital filmmaking, will graduate in May 2018. He is hoping to find employment at KENW in master control and produce content for the television station to broadcast.

"I am a 60-year-old non-traditional student. I found my back into college after I became disabled due to rheumatoid arthritis. I lost my career as a pest control operator, and my doctors put me on disability," explained Bill. "After a few years off to recover my doctors suggested returning to college to learn a new trade that I could function with my disability. Don Criss was one of my accounts in pest control and a television producer at KENW. When the opportunity came up to return to college, Don was the first person I called and he helped me get started."

He added that ENMU has the "best television program in the area."

Bill has had several people in the Eastern community serve as mentors to him, including Dr. Roe, Don Criss, Allan Crawford, Mickey Morgan, Lonzo Lassiter, Colt Owens and Jon Barr.

He volunteered at Dawg Days 2015 for the broadcast center, for theatre plays in 2015-16, with the broadcast of ENMU football and basketball games in 2016-17, with News 3 New Mexico on a regular basis and with the "Creative Living" television program since he returned to school.

Bill was born in San Diego, California, and grew up in Portland, Oregon. He has one sister, Anna, who is living with his retired mother, Ruth, in Roswell, New Mexico. His brother, Dave, and his father, Phil, are deceased.

His hobbies include gardening, photography, yard work, reading and writing.

Bill's advice for his fellow Greyhounds is: "Don't miss classes, turn your homework in on time, volunteer for as much time as possible working on media projects and keep a positive attitude." 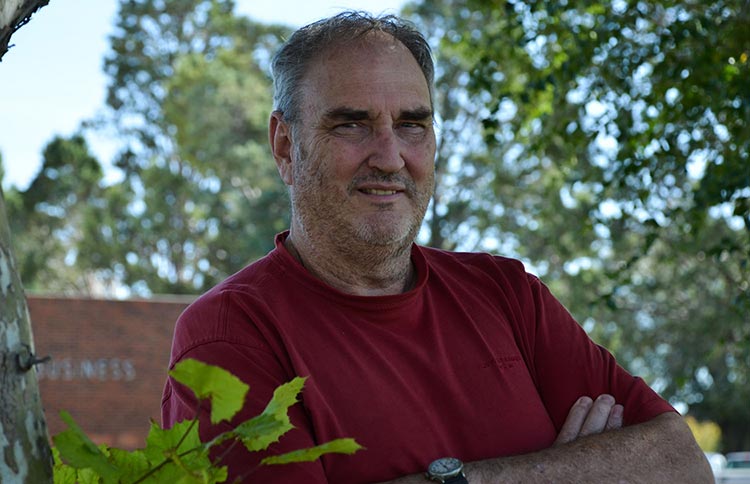