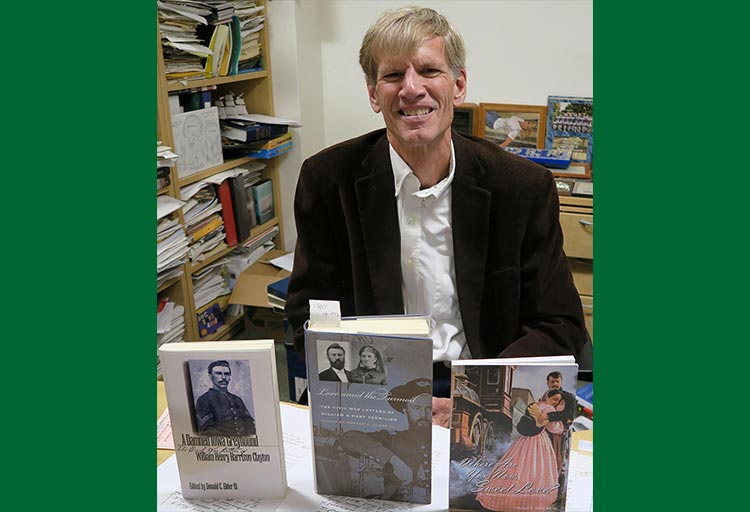 Dr. Donald Elder III with three books he has written.

"By all rights, nothing should have inspired fear in John T. Jenkins by the time he reached the age of 24. During his life, Jenkins had faced danger on numerous occasions, and his experiences should have made him immune to any sense of dread or foreboding. And yet, as Jenkins picked up his pen to write a letter at Young's Point, Louisiana in April of 1863, something clearly frightened the young man."

This is the opening paragraph in an article by Dr. Donald Elder III, professor of history at Eastern New Mexico University, about a Civil War letter recently found in an attic in Iowa a Union soldier wrote to his hoped-to-be-wife from the battlefield.

In May 2017, Dr. Elder and his wife, Janine, visited her sister in western Iowa. While there, she shared with him a letter dating from the Civil War an acquaintance had given her. A transcript of the letter is at the bottom of this article.

"As I read it, I quickly realized that the letter represented a moving human interest story," said Dr. Elder, also a local broadcasting legend.

In April 1863, a Union soldier from Iowa wrote a letter to an unnamed resident who resided in his home county. In the letter, he briefly discusses what he suspects lies in the future for his unit, and then asks her to marry him. His signs the letter "John T. Jenkins, Second Iowa Battery Light Artillery."

"This short letter fascinated me," said Dr. Elder. "I immediately wanted to know who he had written to, and what her answer was. I didn't have much factual information to base my research on, but it at least gave me a place to start."

His first step in researching the letter involved finding out more about John T. Jenkins. Dr. Elder obtained his service record from the National Archives and Records Administration and found that he had joined the Union Army in August of 1861. He enlisted for three years and saw action in a number of battles during his years of service.

Dr. Elder used the website Ancestry to do further research on Jenkins. He was born in Kentucky in 1838, and his family had moved to the Iowa Territory in 1844. Research in Audubon County revealed that Jenkins had gone to Pike's Peak during the Gold Rush in the late 1850s, but had returned to Iowa empty-handed. After President Lincoln asked for volunteers to return the seceded states to the Union after the firing on Ft. Sumter, Jenkins quickly answered the call.

The professor, also a co-founder of noon-time basketball at ENMU, discovered that Jenkins had wed a young lady named Darthula Rogers in January of 1865. Through Ancestry, Dr. Elder found out that she had been born in 1839, and at the time of the Civil War she lived only two miles from where the Jenkins family resided.

That information led him to believe that in all likelihood Jenkins had made his proposal in 1863. After finding out that Audubon County, Iowa, had a local history group, he contacted them to see if anyone had information about the letter. As it turned out, one of them had the original copy, and she informed Dr. Elder that descendants of the Rogers family had given it to her.

According to Dr. Elder, who has also been active in serving on committees and publishing about NASA and space exploration, it was Jenkins' fear of what Darthula Rogers' answer to his proposal might be that scared him more than war.

The professor confirmed that she received the letter, and agreed to marry Jenkins because further research revealed that their marriage lasted 55 years until his death, and produced three children that survived into adulthood. By the time he passed away, Jenkins had become one of Audubon County's most prominent citizens.

Initially, Dr. Elder thought about submitting his article to a journal focusing on the Civil War, but, upon reflection, decided that the story actually involved Jenkins's life both before and after that conflict. For that reason, he submitted the article to the Iowa History Journal, which focuses on the broad scope of that state's past.

In 2013, The Pioneer Press published "Where Are You Now, Sweet Love? The Writings of Mary Kemper Vermilion, 1855-1870," a book that includes a significant portion that focuses on the Civil War.

He has presented 20 papers on the Civil War at various conferences and has had six book reviews on Civil War monographs published in journals.

Dr. Elder feels that there are lessons from the Civil War we can apply to today's political environment.

"There is one deep and abiding lesson regarding the Civil War that we should never forget: this was the one time in our nation's history when we failed to compromise," Dr. Elder said.

"Some historians would argue that Americans could never have peacefully resolved the issues dividing the nation at that time, but I feel that our history up to 1860 proves that no problem had ever proven intractable for us. Our nation clearly benefited from the war in the sense that we eradicated slavery much more quickly than could have ever happened peacefully, but this progress came with an incredibly high price tag.

"We should always respect those who fought to create, in Abraham Lincoln's words, 'a more perfect Union,' but we should never forget that the national tragedy we experienced might have been avoided if cooler heads had prevailed."

Dr. Elder says historians will continue to write articles like his as Civil War letters continue to surface — even though that conflict ended 150 years ago.

"Our most recent conflicts, however, will probably not yield the type of research possibilities that the Civil War offered," Dr. Elder said. "Today, soldiers communicate with their loved ones through electronic devices rather than by writing letters. This makes it unlikely that anything like the love letter written by John T. Jenkins from his camp in 1863 will ever emerge from our campaigns in Iraq or Afghanistan.

"As a historian, I am saddened by that fact, but I also understand that those on the home front undoubtedly appreciate the immediacy of cell phone calls!"

With no corrections, here is the exact transcript of Jenkins' letter:

With pleasure I seat myself to reply to your welcome letter which I received some time since. I delayed longer than I would to see if there would not something happen that would interest you, but it is of no use. I have no news yet. I am well and hope this will find you in good health, for without it there is no comfort on this earth. I think we will leave here in a few days. I do not know our destination. I think we will go across the state to Red River and go down that in order to get below Vicksburg. Then we will soon know if we can take the place.

It surprised me to think that Miss Kincaid [Elizabeth Kincade, age 24, of Big Grove Township in Audubon County] has refused so many of our young men in Audubon County. I don't see what the great inducement is. Perhaps she has become lovely since I left that part of the land. Well, that is a privalige that the women have over the men. I am glad that I was not there at the time or perhaps I would have made the same kind of proposals and I am sure she would reject me. But enough of her. The subject of matrimony is one that requires a thorough consideration. Perhaps you may think strange of this, but I have consulted my feelings on the subject. I find myself posesed of a desire that can only be gratified by your giving your consent to become mine forever.

Oh, how I wish that I could get the answer to this tonight. Please give this a proper consideration and let me know if I am to be the hapy man. How often will the question be asked in my mind. Will this meet with a warm reception or will she cast it from her with scorn. God forbid that it be the latter. But I must close. It is now fifteen minutes til 11 o'clock. Everything is quiet in camp. Please write as often as you can, for that is the only pleasure I have is receiving and answering your letters. For the present, goodbye.