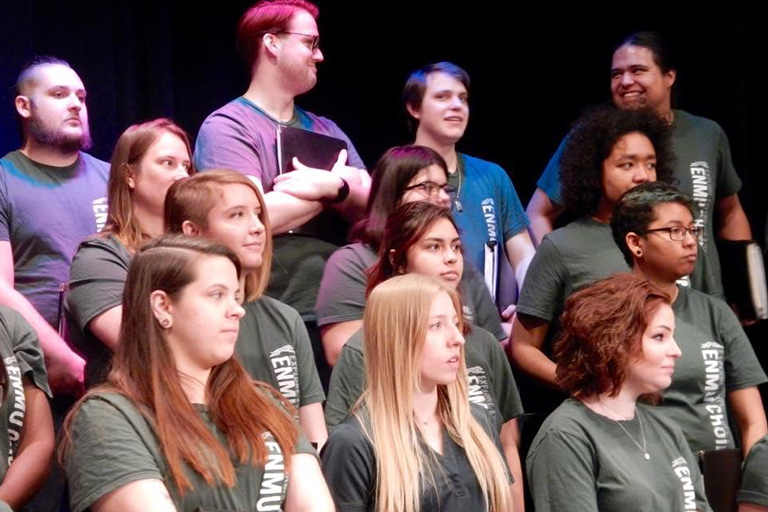 Students from the ENMU Choirs.

The ENMU Choirs, under the direction of Dr. Jason Paulk, presented their annual Spring Concert on April 18 to an appreciative audience in Buchanan Hall. The repertoire sung by Swanee Singers, Chamber Singers and University Singers was diverse. Everything from the polyphony of Felix Mendelssohn and the rich harmonies of Johannes Brahms through the more familiar music of ABBA, and several sets of themed music, including spirituals and a social activism set, focused on suicide awareness.

Recognizing the need for people of all ages in our community to know of available resources when they are experiencing emotional struggles, Dr. Paulk contacted the Portales and Clovis High Schools to explore the possibility of performing three songs grouped to focus on suicided awareness for local high school students. These three pieces, "Even When He Is Silent," "Please Stay" and "You Will Be Found," comprise a set of music meant to deliver a message of hope and support to those who might either be struggling with thoughts related to suicide or have someone in their life who either has struggled with suicidal thoughts or has attempted or completed suicide. In speaking with both administrators, fine arts coordinators and counselors at both schools, the ENMU University and Chamber Singers were welcomed to visit these schools.

On April 2, the ENMU Choirs sang at Portales High School for the fine arts students. Each student was given a printed program of the pieces performed, with mental health resources listed on the back of the program. The PHS students were very attentive and appreciative, and our ENMU students enjoyed interacting one-on-one with the students after our performance. Mr. James Golden, choir director, shared a video with the ENMU Choirs following our performance in which the choirs thanked us for visiting, and a few individual students stepped forward to speak more personally to the specific ways in which the sung message of hope had impacted and encouraged them.

On April 25, the ENMU Choirs sang at Clovis High School for the fine arts students, counseling staff, several faculty and the school principal, Jay Brady. Although a larger population of students, we found the students to be equally attentive and appreciative. Once again, our students had an opportunity to interact one-on-one with the students following our performance, and we left the campus feeling we had made a difference - that we had communicated hope, joy and light, and reminded these students that they are never alone. There will always be someone who will listen to them, and that, while they might not be able to always control their feelings and thoughts, they can control their actions. We reminded one another that, while no individual can help everyone, everyone can help someone. What a joy as ENMU faculty to see our students sharing this message of hope with young people.

Four members of the ENMU Choirs shared personal, meaningful experiences from these school outreach performances. Freshman vocal performance major Casey Hennigan of Rio Rancho, New Mexico, said she was "affected by the message we shared to the high school audiences because it was only a few short months ago that I was sitting where they are. The feelings of loneliness and confusion are mutual ones that most of us share, and to see the look on those students faces - to know that it touched even a few of them, that they felt heard - just made me so happy."

Heather Brandt, a voice major also from Rio Rancho, shared this experience: "I was lucky enough to have the senior that I have been teaching voice lessons to in the audience at Clovis High. When she found me after the performance, I could tell she had been crying, so I gave her one of the biggest hugs I've ever given anyone. She held on for every second, and I could tell she really needed it. We had briefly talked about how our mental state can affect our singing in a lesson previously. She mentioned that she kept thinking about the friend she lost this year during the performance and was moved deeply by us being there. I'm so glad I had the opportunity to share this experience with her. Being able to convey to her through song that, even as her voice teacher, I care about her and how she's doing is something I'll never forget."

Dalia Melendez, a senior vocal performance major from Muleshoe, Texas, shared: "Well, last week I was leaving church practice, and we had stayed later than usual, which coincided with the youth group meetings that the church does with the high school. Just as I was about to pull out of the parking lot, one of the high school girls ran to my car and knocked on my window. She said she was incredibly moved by the performance of our choir and that she was blown away. She was just standing there remembering everything we had done in awe. My only wish is that we could have reached bigger audiences. More people need to hear this message!"

Finally, senior music education major, Annabelle Rangel of Lovington, New Mexico, shared the following:  "Sharing this message of hope helped me find peace in accepting the loss I had experienced from the suicide years ago of someone I cared about. I became overwhelmed with emotion each time we performed this set of music because it brought back so many hard memories. I hoped a student watching saw and heard how much this topic touched the singers and understood how important suicide awareness is. After each performance, I paid attention to students as they left; some were crying or comforting each other. This reassured me and helped me see that there were, in fact, students who cared for each other and made an effort to make someone feel important. Through all performances of this set of music, my main goal was to reach at least one person and be the voice that helped to guide them to find help."