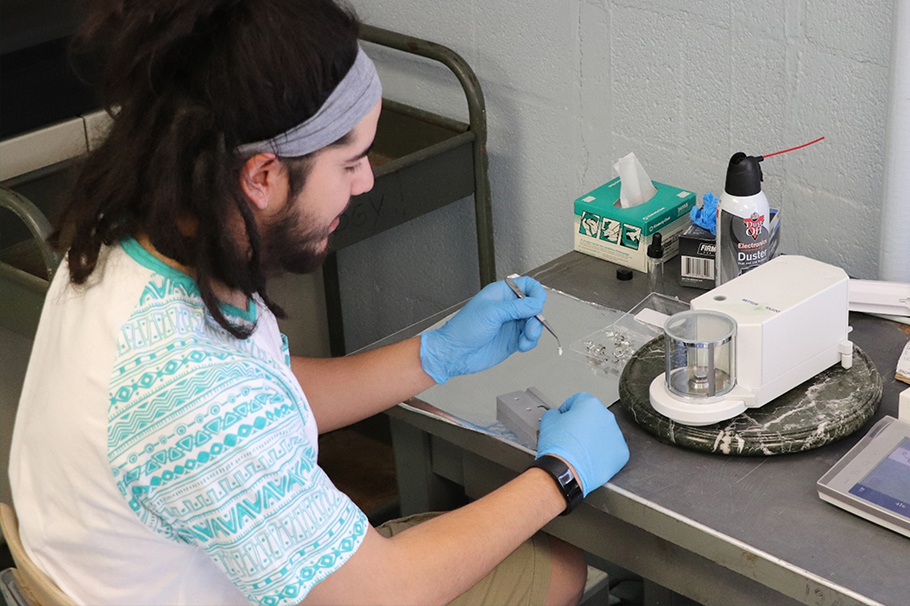 Dr. Jesse Filbrun, assistant professor of biology at Eastern New Mexico University, will have his research published in the August 2019 edition of "Aquaculture," an academic journal focused on international scientific contributions to aquaculture.

Dr. Filbrun worked with colleagues in Stoneville, Mississippi, to quantify the contribution of zooplankton to channel and hybrid catfish growth in aquaculture ponds.

The ENMU professor completed his doctoral research program at The Ohio State University in 2013, where his focus was improving channel catfish production reliability in ponds.

Historically, most catfish producers rear juvenile catfish in ponds by supplying excessively large quantities pelleted feeds from the time of pond stocking. However, in 2014, Dr. Filbrun and his doctoral advisor, Dr. David Culver, published a paper in "Aquaculture" that provided strong evidence that live zooplankton, and not pelleted feed, supported fish growth during the early weeks after stocking ponds.

"This is an important finding because fish farmers may produce fish more cheaply, sustainably and reliably by reducing feed additions to ponds without reducing fish growth," says Dr. Filbrun.

When did you begin working on this research? Describe your research process.

The experiment was performed in 2016 at the Thad Cochran National Warmwater Aquaculture Center in Stoneville. To quantify the fish diets, we used a mass-balance stable isotope approach. This approach is based on the principal that the fish tissues match the stable carbon and nitrogen isotope ratios of the foods they eat in the ponds.

My colleagues conducted the pond experiment, then my students (including Jeremiah Olivas, an ENMU undergraduate) and I prepared samples of fish, zooplankton and pelleted feed for stable isotope measurements by a contract laboratory. I then completed the diet modelling, statistical analyses and wrote most of the original draft of the manuscript. We submitted the manuscript for consideration for publication in "Aquaculture" in November 2018.

The most important results of our study were that 1) hybrid catfish and channel catfish both rely heavily on zooplankton to support their growth during the early weeks after stocking fish in ponds, and 2) there were no differences in fish diets or growth rates between these catfish genotypes. Thus, producers should manage ponds to support adequate densities of zooplankton, and hybrid catfish nursery ponds can be managed similarly to channel catfish nursery ponds. Yes, we are in discussion to continue similar lines of research in the future.

How did you go about getting your research published?

My colleagues and I felt our study presented a novel approach to answer an important question for catfish producers. Thus, we decided to submit our manuscript to "Aquaculture," the most reputable journal in this field of aquatic science.

What does it mean to you to have your research published?

Unpublished work in science may as well have never happened, because it has no impact on the broader scientific community. Thus, it is incredibly important to us and to our field to publish our findings in a highly reputable, peer-reviewed journal. Articles in "Aquaculture" are widely read and have a relatively high citation index, so I feel this contribution will make a meaningful difference for catfish production methods. Personally, I feel that finally seeing an article in print is incredibly satisfying, as it represents years of hard work and development.