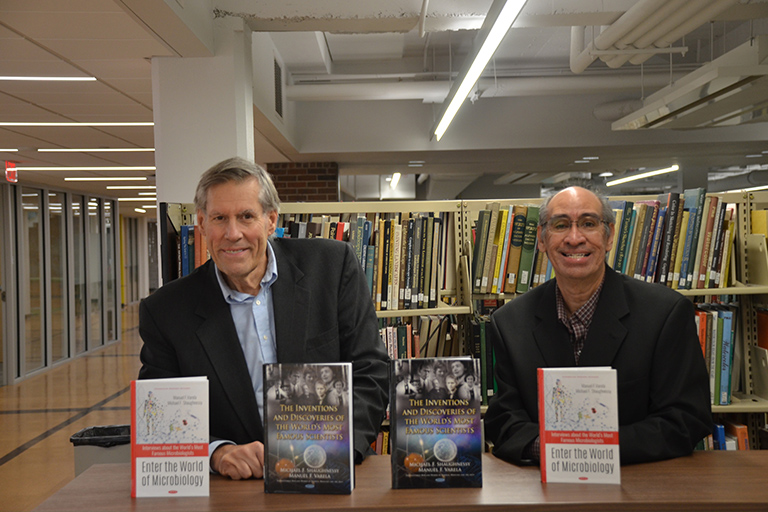 Two professors from Eastern New Mexico University, Drs. Manuel Varela and Michael Shaughnessy, have published a new book together about the remarkable lives and discoveries of scientific investigators in the field of microbiology. The title of the original publication is "Enter the World of Microbiology: Interviews about the World's Most Famous Microbiologists." The new work is part of a series dedicated to microbiology research advances.

Varela and Shaughnessy have collaborated on book-writing since 2017, and they had previously published their first book together in May of 2018 about the world-famous scientists in a book called "The Inventions and Discoveries of the World's Most Famous Scientists." The new publication, their second one, was released in April of 2019 by Nova Science Publishers, Inc. Both books are currently listed on Amazon's best-sellers list.

Their second book discusses the personal lives and ground-breaking research experiments of microbiologists who made tremendously significant discoveries throughout the current and previous centuries. Many of the microbiologists made contributions that have proven beneficial in modern times. Varela said, "When I lecture on concepts in microbiology, I go over ground-breaking experiments and mention the scientists who made the discoveries."

The new book discusses twenty-five of these scientists and their contributions. Shaughnessy said, "Some of the names will be instantaneously recognized, like Marshall, Levy, Welch and Ogston, while others will need to be more extensively researched and read about, like Waksman, Enders, Medawar."

The book also discusses how Dr. Emil Von Behring discovered these life-saving antibodies, which he had called antitoxins, and made great strides developing a vaccine against the dreaded diphtheria, a severe respiratory disease. The antitoxins, the antibodies, were also used by another great scientist, Professor Dr. Shibasaburo Kitasato, to help protect us all from the lethal effects of tetanus.

The new book tells of the discovery, by the inimitable Dr. Stanley Prusiner, of the agent that causes the "mad cow" ailment, an entity he called the prions. Varela and Shaughnessy discuss the mechanism by which the prion agent causes the symptoms of the mad cow disease in humans and whether one should avoid cows and farms if traveling overseas.

Varela and Shaughnessy relate in the book how Dr. Albert Neisser, a German bacteriologist, studied a variety of diseases like leprosy and syphilis. Dr. Neisser also discovered the bacterium, called Neisseria gonorrhoeae, that causes gonorrhea, a sexually-transmitted infection. They discuss avenues for past and modern treatment of the ailment.

Varela and Shaughnessy also discuss how Dr. Carl Eberth discovered the bacterium responsible for the typhoid fever, a type of salmonellosis caused by Salmonella enterica. Varela said, "Salmonella bacteria cause periodic outbreaks of infection, even in modern times."

Early microbiologists found ways to treat infections caused by the pathogenic type of microbes. Varela said, "Microbes are tiny creatures that live in our world and include organisms like bacteria, viruses and fungi." Shaughnessy added, "We are in debt to many scientists who have helped to eradicate many dreadful diseases."

For instance, Dr. Paul Ehrlich sought a "magic bullet," which would, in theory, selectively kill syphilitic bacteria while leaving a patient mostly alone from the bullet's lethal effects. While Dr. Ehrlich and his collaborator, the eminent Dr. Sahachiro Hata, failed to find a suitable magic bullet, they set the stage for others, like the notable Dr. Gerhard Domagk, who discovered the sulfonamides, called sulfa drugs, which proved to efficacious against the deadly Staphylococcus aureus and Streptococcus pyogenes bacteria, the agent of the flesh-eating disease.

The new second book by Varela and Shaughnessy was critically evaluated by current and former colleagues. Dr. Juchao Yan, professor of chemistry and chair of the Department of Physical Sciences at ENMU, said, "This is one book that anyone and everyone who is interested in microbiology and medical fields should have on their bookshelf." He further went on to relate that the authors' "tailored interview questions, and the most authoritative answers to the questions make this book fantastic."

Dr. Robert Taylor, emeritus professor of microbiology, ENMU, said, "It is a comprehensive well-done treatment, which minimizes highly technical jargon, allowing non-science trained individuals an easy read and understanding, so the many advances that have been made can be appreciated!"

Another ENMU professor emeritus, Dr. Gary Pfaffenberger, said, "Encomiums to the authors for their style of presentation and content. The question-answer format takes the reader immediately into a well written, self-explanatory and abbreviated summary of the life histories and scientific contributions of twenty-five scientists."

Dr. Varela has been a faculty at ENMU for over 22 years, teaching the microbiological sciences in the Department of Biology. Varela has a Ph.D. in biomedical sciences with an emphasis on biochemistry and molecular biology from the University of New Mexico with postdoctoral training in microbial physiology from Harvard. Dr. Varela's research interests include bacterial antibiotic resistance.

Learn more on the publisher's website. Find the book on Amazon and Google Books.

The table of contents: