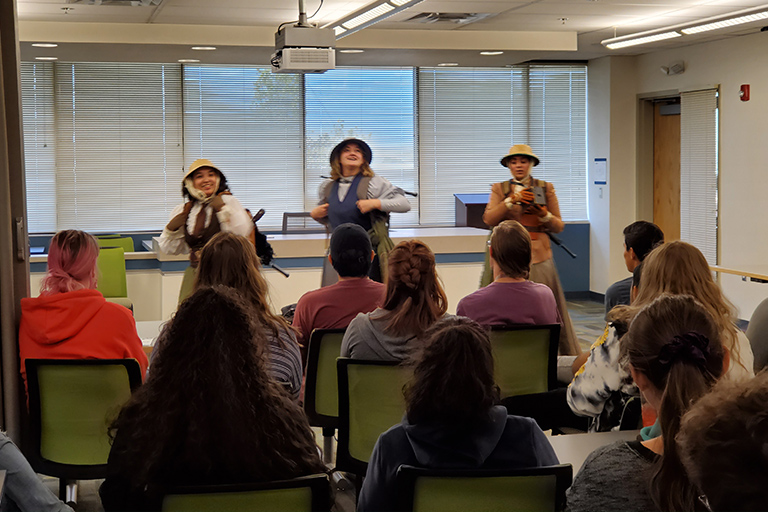 (L-R) Raquel Valenzuela, Darby Kaitlin Cavanaugh and Alexandra Sena at the College of New Mexico, where they performed for an "Introduction to Theatre" class taught by Leonard Madrid. Photo by Erin Wegleitner

Eastern New Mexico University's theatrical production "On the Verge" was taken to the College of New Mexico and the Valencia County Theatre Festival, held at Valencia High School, from Oct. 10-11 by director Anne Beck and Erin Wegleitner, scenic, light and costume designer.

The production of "On the Verge," written by Eric Overmyer, was the Department of Theatre and Digital Filmmaking's first show of the season, running at ENMU from Oct. 3-6. The cast of four included Darby Cavanaugh, a senior theatre major, Casey Hodges, a sophomore DFM major, Alexandra Sena, a sophomore theatre major, and Raquel Valenzuela, a senior DFM and theatre major.

The cast was joined by stage manager Angelica Casteel, a junior majoring in English and minoring in theatre, Fred Mete, a senior theatre major, and costume designer Marianna Medina, a senior DFM major.

During the high school performances, Dr. Beck, Erin, Fred and Angelica served as adjudicators—filling out forms and then engaging in talk-backs with the high school actors. After the performances, all of the ENMU cast and crew taught workshops to the high school students in movement technique, directing for actors and costuming. Marianna adjudicated at the festival and ran a costume workshop.

The performance at the festival came about when Dr. Beck, professor of theatre at ENMU, had been invited to be an adjudicator and workshops leader at the first annual Valencia County Theatre Festival by two high school teachers, Michelle Gammill of Los Lunas High School and Carol Stokes of Valencia High School. Dr. Beck suggested bringing the whole show of "On the Verge," since it had been played a week before the festival. Ms. Gamill and Ms. Stokes agreed.

The College of New Mexico visit was requested by Leonard Madrid, a renowned New Mexican playwright, theatre teacher and ENMU theatre graduate, once he knew the production would be in the Albuquerque area. Mr. Madrid's play "Las Aranas" was performed at the Theatre Center last February.

"The two-day tour was an exciting venture," said Dr. Beck. "The actors tried out their production on a different stage and performed in front of both college students at CNM and high school students at the various high schools, meeting in them afterward when they taught workshops.

"We look forward to a return visit next fall for the second annual Valencia County Theatre Festival," she shared.

Marianna Medina discussed her experience attending the tour: "It was very exciting. I am a coordinator of the ENMU Drama Fest, so it was interesting to attend a different high school theatre festival."

Her favorite part of the trip was working with the students who participated in the workshop she led. "It was wonderful to see them create something unique to them. I also enjoyed getting to meet new people and learning from them, as well," she said.

She feels that the event is important for students. "Being able to spend a whole day with people who enjoy doing the same things you do is valuable," explained Marianna. "It also creates a more immersive learning experience." 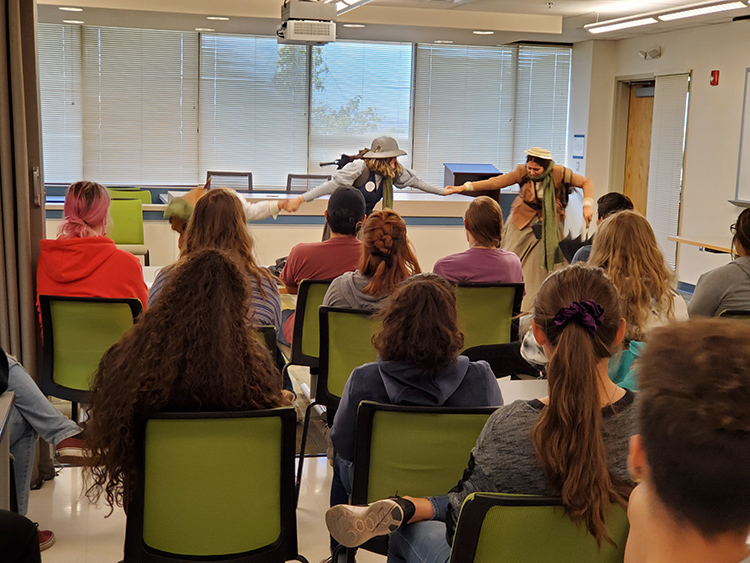