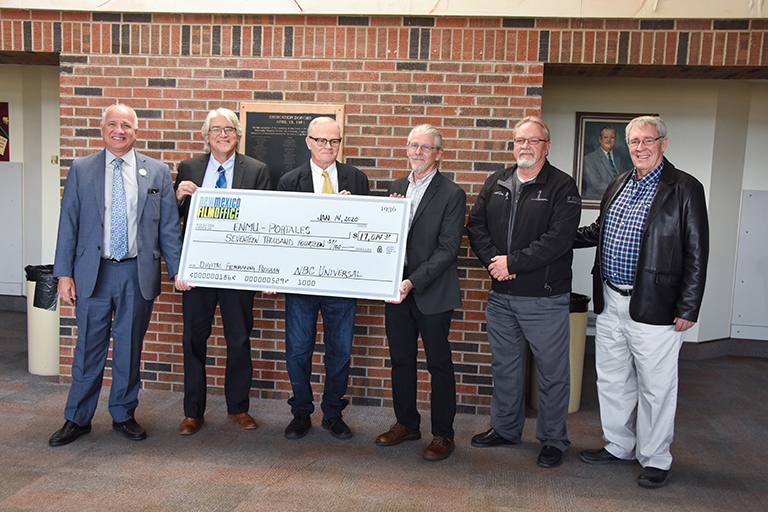 Eastern New Mexico University's digital filmmaking program received a $17,000 donation from NBCUniversal through the New Mexico Film Office Give Back Program. Todd Christenson, director of the New Mexico Film Office, toured the campus, visited classrooms and presented the check to the program on Jan. 14. The presentation was attended by New Mexico State Senator Stuart Ingle, ENMU President Jeff Elwell and members of the campus community, including film students and faculty.

Rutland said, "We are immensely pleased to be receiving this donation from NBCUniversal through the New Mexico Film Office Give Back Program. These funds will go toward meeting the financial needs of our students through scholarships, grants and other assistance that will aid them in the production of their student films and acquiring important industry internships."

The ENMU digital filmmaking program provides a comprehensive education in all facets of the art. Students study the disciplines of acting, directing, visual design, sound design and screenwriting, as well as the technical requirements of camera operation, lighting, sound recording and postproduction.

Because the degree does not require a minor, students are free to pursue their own plan for specialization with the mentorship of faculty advisors. ENMU is committed to providing students with an affordable education and high-quality experiences that will prepare them to successfully compete for creative positions in the film and television industry.

Besides its broadcast networks and film studios, NBCUniversal is best known for the USA Network, Bravo, Telemundo and Universal Parks and Resorts. The New Mexico Film Office serves the film and television industry locally, nationally and internationally. Their purpose is to market the state to the film and television industry, service the productions and promote jobs for New Mexicans.