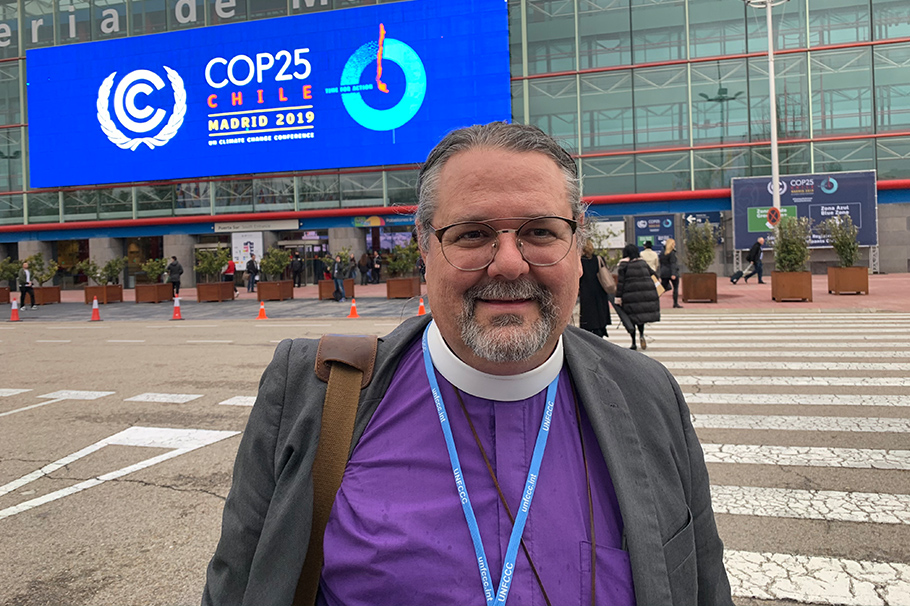 Rev. David "Dave" Rogers gave a speech on the impact the oil and gas industry has had on the town of Carlsbad, New Mexico, at the United Nations Climate Change Conference in Madrid, Spain, in December.

How were you selected to speak at the United Nations Climate Change Conference?

I was selected because I live in the Permian Basin. My community of Carlsbad, New Mexico, is experiencing the most substantial oil and gas boom in history. It was deemed important that the Conference in Madrid hear from the Permian so the world could know what is happening here.

Tell us about your speech.

My speech to the UN was focused on the first-hand experience of living in the oilfield. I focused on the environmental, social, political and economic effects of living with an oil and gas boom in my back yard. Often the attention is focused only on the positive aspects of economic benefits, jobs, increased tax revenue and the like. I was there to discuss the human costs as families are subjected to unknown environmental toxins, bullying and intimidation by the industry and industry supporters, the lack of regulatory oversight, the human carnage on oilfield roadways and the harsh economic backlash on businesses that cannot pay oilfield wages.

Describe your experience at the conference.

The experience was wonderful! I spent a lot of my time in sessions that dealt with the human and social cost of global climate change. Understandably, many of the most negatively affected people in the world are those in poverty, global indigenous populations and people who lack the means to speak up in their own defense. As a pastor, learning from and standing with the "least of these" is central to my faith and vocational practice. It was also powerful to connect with others from around the planet who share my passion. The conference itself was, in many ways, very surreal. There was a large contingent of people from all sides of the debate. It was clear, however, that big industry was the dominant presence at the event.

What lessons did you learn at the conference? How will you bring those lessons back to ENMU and use them in your career?

This was my very first time to see politics played out on a global stage. Yet, it was stark to see the reality that the issues are essentially the same we face on the local stage—just much larger! As a communication graduate student at ENMU, I do hope to have opportunities to speak to and enlarge the campus's understanding of climate change. Most importantly, I want to be able to address the issue in a way that looks at the broad picture and the human cost, rather than allowing it to stay mired in the politics of oil, money and power.

Did you do any sightseeing in Spain?

No. There was no time for that. I was on the ground for only three days, and all three of them were spent at the conference.

What are your career goals?

My first focus is in pastoral ministry. For the last 18 years, I have been the pastor of the First Christian Church (Disciples of Christ) in Carlsbad. I intend to continue my ministry here. However, with the rapid changes in the local economy and culture brought on by oil and gas, I also plan to expand my environmental and humanitarian efforts to bring a voice of balance and justice to the field. I have also taught at New Mexico State University's Carlsbad branch campus and have considered getting back into the education field in the future.

Tell us about your education.

I am on track to graduate in May of 2020 with a master's of communication. I graduated ENMU with a bachelor's of communication in 1990 and started my graduate degree at that time. I stopped to join the United States Coast Guard and then obtained a master's of divinity from Lexington Theological Seminary in 1999. Recently, I decided to finish my degree in communication—a degree that will have taken me 30 years to complete.

Which professors have helped mentor you during your time at ENMU?

By far, I have to say Dr.'s Dobson, Roe and Bramlett have been very helpful and inspiring to me, as well as extremely supportive of my Madrid trip. I also have to mention Dr. Ernest Phelps, Dr. Anthony Schroeder and Dr. Timothy Ashmore, who were extremely influential in my bachelor's studies over three decades ago.

I am ordained in the Christian Church (Disciples of Christ) and have served churches in Butler, Kentucky; Mize, Kentucky; Artesia, New Mexico; and Carlsbad.

I am married to Kimberly. We have five children and seven grandchildren. Along with the church, I work for an agency in Carlsbad, Golden Services, which offers drug and alcohol rehabilitation, behavioral health counseling, mediation, home health, supervised visits, supervised exchanges and bereavement services.

Madrid is not the only work I have done in this field. I have spoken before the New Mexico Environment Department and New Mexico Energy Department on these issues. I work with a local faith-based coalition seeking to put a spotlight on the unregulated and out-of-control exploitation of the region for oil and gas money. I am on record as saying that I am not against the oil and gas industry. Rather, I am in support of reasonable and enforceable regulations. There is a lot of money to be made in this industry, but unfortunately, the focus has only been on making money and not on asking the difficult questions about the cost. I see my role as to ask the hard questions and keep them at the forefront of the public discourse.

Read more about Dave's UN experience and see videos of his speech in the Carlsbad Current-Argus.