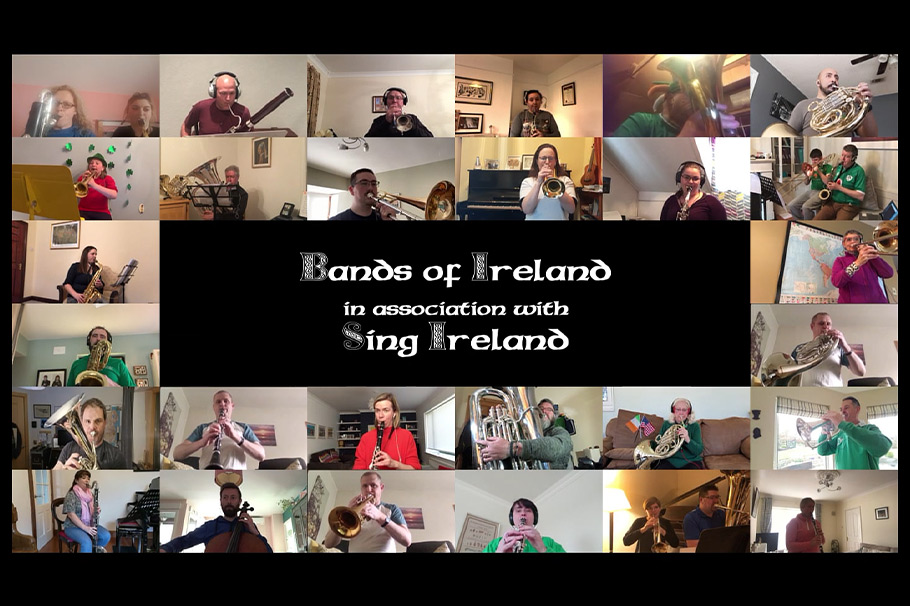 A look at the Bands of Ireland virtual performance.

Musicians from around the world took part in the Bands of Ireland international virtual performance, including three faculty members from Eastern New Mexico University.

How did you get involved with the Bands of Ireland performance? What was your role?

Dustin Seifert: I saw an advertisement on the Bands of Ireland Facebook page and knew I wanted to be involved. This was a major project that involved over 1,000 musicians (wind, percussion, voice) worldwide. Keith Kelly, the executive producer of Bands of Ireland, did an outstanding job promoting this international performance opportunity. I thought it was quite important from a faculty-to-student modeling standpoint, especially considering the stay-at-home order. Also, due to ENMU’s strong connection to the Emerald Isle, I am always on the lookout for Irish music news. I prepared a euphonium track for the final recording.

Dr. Pamela Shuler: I first heard about the project from Mr. Dustin Seifert. After exploring, I was able to record the first clarinet part and submit for consideration. I was very excited to be accepted to the group based on my submission.

Dr. Sidney Shuler: Dustin Seifert let me know that it was going to be happening and recommended it. I prepared my part and followed the instructions – performing my part along with a provided click track.

How did you prepare? What were the logistics?

Dustin Seifert: Bands of Ireland provided a set of recording guidelines, the music and appropriate practice tracks. All musicians had to prepare the part before recording.  This is why the instrumentalists and vocalists sound incredible! The video had to meet certain specifications. Musicians had to record in a defined format while streaming a click track over headphones.

Dr. Pamela Shuler: While musicians are used to performing and recording, this was actually my first experience recording with a click track as an individual musician. In previous recording projects, I was able to work with a conductor and fellow musicians to create various takes. For this project, the Bands of Ireland provided a click track that I heard in headphones. This helped all submitted recordings line up to one tempo. Using just a pair of headphones, my computer video, and an external microphone, I was able to record my track.

Dr. Sidney Shuler: At the beginning of the “sheltering in place” in early March, my wife and I purchased a nice microphone for use with a computer (Blue Yeti). We used headphones while performing, so the click track could not be heard on the recording.

What did it mean to you to take part in this performance?

Dr. Pamela Shuler: I have never heard a musician say, “I went into music to work by myself.”  The nature of much music is working with others to create something larger than one person can create independently. In thinking back over my career, my favorite projects include working with others. At the moment, musicians are not able to join together physically.  Participating in this new format was extremely significant to me at this time. Going beyond musicians in our local area, this project connected people across multiple continents, allowing us to create something meaningful despite the current worldwide situation. I am very glad that I was a part in creating something positive during this time.

It is amazing how small the music world is! Almost 20 years ago, I had the chance to perform with the American Wind Symphony Orchestra, a summer performing group that played on a river barge. Through this project, I was able to reconnect with a fellow clarinetist from that group that I remembered living in County Cork, Ireland. It was a result I never expected from this project!

Dr. Sidney Shuler: Part of being a musician is performing. Due to precautions of the COVID-19 virus, no one has been able to gather together in order to perform. This element is a sorely missed one. Having an outlet like this was nice.

It also means something a bit different to me in that my daughter, Eleanor, was also able to perform on the recording. She had heard her mother (Dr. Pamela Shuler) and me preparing our parts and couldn’t get it out of her head. She asked if there was a way that SHE could participate, as well. She has been practicing the trumpet quite a lot since we began schooling from home. Since there WAS a more basic part available, she and I worked on it together for a couple of days – each day for about two hours (which for a seven-year-old is pretty amazing!!). On the day we recorded, she asked if I could play along so she could stay together with the music. I tried to keep myself out of frame and played very softly so she could “have the spotlight,” as it were. Keith Kelly (executive producer for the project) responded the next day that he thought she did great and was certainly going to be in the video. She was very proud of herself. Seeing her pride in her accomplishment has made it ALL worth it to me.

Do you plan to participate in other virtual performance based on this experience? How has the reaction to the performance been?

Dr. Pamela Shuler: I think it is fantastic that the premiere of the recording was broadcast on the Late Late Show in Ireland. I don’t think I ever would have had the opportunity to appear on that show without this project!  Not only did this performance connect musicians across the globe, but the performance may be viewed by anyone with an internet connection. With much of my family in Pennsylvania, they don’t often have a chance to see me in a live performance. I’m glad I was able to share this with them so they could also enjoy the finished project.

I think we are now living in a different world than we were three months ago. I think projects such as this are showing musicians what possibilities exist and also will drive the development of new technologies.  While there is no replacement for being able to interact and create music with others in person, I look forward to participating in and seeing what developments are made to facilitate future projects such as this.

Dr. Sidney Shuler: The reaction to this project has been amazing. As of my writing, there have been over 62K views! I have also participated in a project that the Lone Star Wind Orchestra produced of “The Stars and Stripes Forever” by John Philip Sousa – the trio also happens to be the fight song for Eastern New Mexico University!

What advice do you have for musicians in the ENMU community looking to share their music and performances virtually during this time?

Dustin Seifert: Share at will. Performances do not have to be as polished as our performance of Ireland’s Call to be meaningful and memorable.

Dr. Pamela Shuler: I frequently speak with my students about how recovery is an important tool for a musician in live performances. If a note doesn’t speak exactly the way you would like or if you need to bring the pitch up, these are all adjustments that we work to correct in the moment of live music-making. Executing every element of a performance perfectly is incredibly difficult and almost unattainable. Everyone has moments they wish they could have back. There is an added element to recorded virtual performances at home. Most of the music we listen to has gone through an extensive editing process in the studio. Most of us don’t have access to these technologies at the moment.  For those considering sharing performances virtually, the first and perhaps biggest step is gaining the perspective that it doesn’t need to be flawless. Make music, and don’t be afraid to share that with others!  Don’t hesitate to join a virtual ensemble or to post your recording. Nothing about our current circumstances is perfect. Enjoy doing something that allows you to make something positive out of this moment in time, and don’t worry about small mistakes!

Dr. Sidney Shuler: I would encourage it, of course.  Preparing at this level is different because you experience every nuance of your playing, good and bad, even more intimately due to the fact that you are putting yourself out there to people you don’t know and may never have the chance to meet.

Dustin Seifert: Several members of the ENMU Band Family performed on this recording, including Sid, Pam, and Eleanor Shuler, BJ, Mel, Meghan, and Tobin Brooks and Bryce and Jessica Mullen. It is inspiring to see their recordings flash across the screen. Greyhounds making a difference. I think each performer is featured for five seconds visually. Their recorded track is featured throughout.

Learn more about the Bands of Ireland performance.