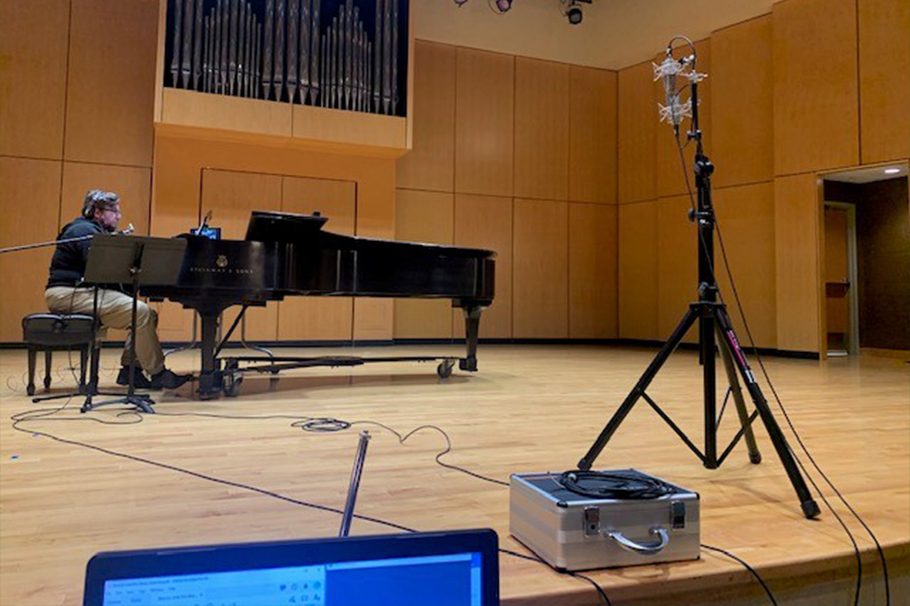 Dr. Gregory Gallagher in one of the SoundJack Studios in the Music Building.

The Eastern New Mexico University Department of Music invites you to join their student performers virtually for the premiere of Vittorio Giannini's radio opera "Beauty and the Beast." The ENMU Opera Theatre's spring 2021 radio production featuring performances from seven students debuts on March 20 at 11 a.m. MDT on KENW-FM and will be available on the KENW website. In addition, KENW plans to film parts of the rehearsal and recording process in hopes of creating a behind-the-scenes television special or web-extra for local broadcast.

Dr. Sherwood discusses the production and the technology used to keep students safe during the recording process.

Throughout the fall semester my colleagues, and I were trying to find an innovative production for the spring that we could rehearse and perform safely. I began researching technology that would accommodate the unique needs of music-making. Most conferencing platforms – Teams, Zoom, Facetime, etc. – transfer data with a fair amount of latency, which ultimately makes real-time musical collaboration near impossible. Through my research, I found a program called SoundJack. SoundJack creates peer-to-peer connections between computers, solving the latency issue. With the assistance of Neil Rutland and the ENMU ITS, we were able to establish 10 SoundJack Studios in our building. These SoundJack Studios allow each student and faculty member to collaborate in real-time from the safety of their own studio.

As I researched this audio-based technology, it made me think about another audio-based technology from the past, radio. In the 1930s and 1940s, radio operas were quite popular throughout the US and abroad. Major broadcasting networks would commission composers to write operas specifically for radio broadcast. Vittorio Giannini's radio opera, "Beauty and the Beast," was originally commissioned by the Columbia Workshop and premiered on the Columbia Broadcast Radio Network, November 24, 1938. Giannini's lush harmonic content and soaring melodies beautifully capture the drama and whimsy of this famed fairytale. When KENW FM New Mexico agreed to broadcast our recording as part of their Saturday morning Metropolitan Opera broadcast series, we knew we had a complete idea for our spring production.

This opera has something for everyone – drama, passion, comedy, beautiful music and a familiar story – and at only 30 minutes in length, it will leave you wanting more. I encourage the audience to think about this as the operatic equivalent to the modern-day audiobook; just sit back, relax and allow your imagination to paint the picture.

Students involved in the production share how they are preparing for their performance and which aspects of the event they are looking forward to the most.

I started preparation for the role early during the Christmas break. I decided to start then so that when we began our weekly class again, I would be able to dive deeper into the music past basic notes and rhythms for my part. I listen to the original radio broadcast every day that I practice my part. I feel like it helps me learn the music in the context of the opera, which really helps with the challenging sections. I also enjoy listening to it overall and picturing the scenes that are happening, a lot like reading a book.

I like every aspect of the production. Currently, we are discussing historical elements of the opera, learning the background of the composer and the history of radio opera. I love the historical element and really enjoy learning about how it fits in with the culture of the time. I enjoy the musical rehearsals as well. We can get into the specifics of the music. Plus, the anxiety of wondering if one is learning their part correctly goes away. Staging rehearsals breathe more life into the long process of putting on a production. You feel like a kid playing pretend. However, this year we won't be doing any staging or costuming since it is a radio opera. The idea of recording and rehearsing in a studio is a little terrifying. I still think it'll be fun, and it is an experience that many classical performers don't have very often. It's hard to pick a favorite part of putting on a production, since each part complements the others.

To prepare for my role as the Second Daughter, I listened to the original broadcast recording of this piece, read through the original "Beauty and the Beast" story and read through the opera score like a book for clues about my character. I looked at my relationship with other characters, what my character's life was like before the opera starts and how she develops throughout the story. I studied the score as well to not only learn the mechanics of my part but to understand the musical motifs and how the accompaniment aids in the storytelling. I have studied the history of radio opera and got to know more about the composer. I have been working to create a clear image in my mind of this opera so that when we record, I can use my voice to bring this story to life for the listeners.

I am looking forward to the recording sessions the most. I am learning so much about recording equipment, software and distanced collaboration. I can't wait to hear my castmates bring their characters to life, and to be a part of it all is such an honor.

Preparing for this role has been unlike most others. Because there is only one reputable recording of this opera (and even that recording is not as like our scores as hoped), we have had to be even more independent throughout our learning process for these roles. This music is difficult due to the thick orchestral texture that accompanies us, which also forces us to be more independent in our learning process. Due to the COVID-19 pandemic forcing us to not be able to sing in the same room, it is difficult to put together some parts of the opera because you are not able to hear your constituents as clearly and to feel the physical vibrations of each other's voices in the room. However, I am eternally grateful for our professors being so creative in ensuring that we have the opportunity to create music together during this difficult time.

I am preparing my role by learning the notes, rhythms and text during my personal practice time. I explore my character development and artistic expression during group music rehearsals in which I collaborate with Dr. Gallagher and my peers to make informed character decisions based on Giannini's score.

I am most looking forward to singing in live time with my fellow castmates over SoundJack. Additionally, I am excited to help Dr. Beinlich prepare a comprehensive listening guide for the audience to enjoy while they listen to the broadcast.

While preparing for this role, I have been in contact with Sister Number Two to discuss places in the music that we found most difficult to learn. We've also talked about the characters we wish to present in every little part that we sing in the opera. Being able to collaborate with my colleagues through Zoom and SoundJack has helped tremendously in the preparation of this opera. Though we are not together in one room, we are still able to experience what an in-person rehearsal would be like. I believe that these rehearsals have been a tremendous help in preparing this opera because Dr. Gallagher asks the important questions that we forget to ask ourselves as performers. He does this to bring our character to life, and it has made the process of learning my part more and more exciting during my practice.

I look forward to rehearsals every night, and it's because I miss my friends and colleagues very much. But it's also because I miss performing with others! Being given this opportunity to perform and work with others in a production has been a big blessing. Now that we are in our final week of rehearsal, I am definitely looking forward to recording the final masterpiece!

I think the element most important in my role preparation for this opera has been consistently working on ways to convey the development and emotions of my character through musical choices. It's really a fun process. We come to rehearsal with one emotion, direction, motivation, and we see how it works within the rest of the composition and with the other characters. Then the directors help us to explore different motivations and how to convey those choices in a way that will move the listeners. That aspect of being in a radio opera has been a new challenge; we usually have costumes and staging to help us out! Consistently submerging myself in the music, applying what we do in rehearsal to that practice and not being afraid to play around with different ways to sing the music is what allows the music to come to life.

I'm most excited just to see how the whole production gets put together. We have so many people preparing different components of the production; the coordinators are putting together a listening guide, KENW is putting together footage for the documentary and we rehearse and will record in sections, so it will be really fun to see/hear it as a complete production. I also feel so fortunate that we were given the opportunity to be part of such a unique way to share our music!

My preparation for my role as the Beast has included some intense musical practice, some contemplative listening and studying and daily brooding and lonely storming around my empty 'castle,' which is what I now call my apartment... you know... to get in touch with my character better. All seriousness aside, I have spent a lot of time in the music studying the difficult music, trying my best to practice with deliberation and accuracy. This music is challenging to learn with some challenging harmonic changes, quirky and sometimes hard-to-read sheet music and a difficult and complicated accompaniment, at least for my skill level. It has been a great growing point for me, and I have learned a lot about my own relationship with learning music through the process of learning this music. I have also spent time studying the story and doing my best to understand the Beast's character more. Perhaps it's my increased levels of gym attendance that have made me feel more 'beastly,' my perpetual singleness or the fact that I too sometimes feel the desperate desire to fall in love that has made it easier for me to understand the Beast as a flawed person. Whatever it is, my study of the character has helped me feel more confident in my ability to portray character over an only audio-level performance.

I am most excited about the days where we get to record together as an ensemble. All of my parts include some interaction with the rest of the cast, and while we are all in separate rooms, the act of pretending and imagining and going above and beyond in order to make those interactions come to life over only audio just seems really exciting to me. I am excited to recreate those images of voice-over actors getting really into their work and getting lost in the music or text while acting into the microphone. I am just excited to recreate that as it has always been something that struck me as cool and a unique art form. I am excited to perform with others, which seems quite simple, but it has been a full year since I have been able to in this much of a live situation, and that is a HUGE deal for me! 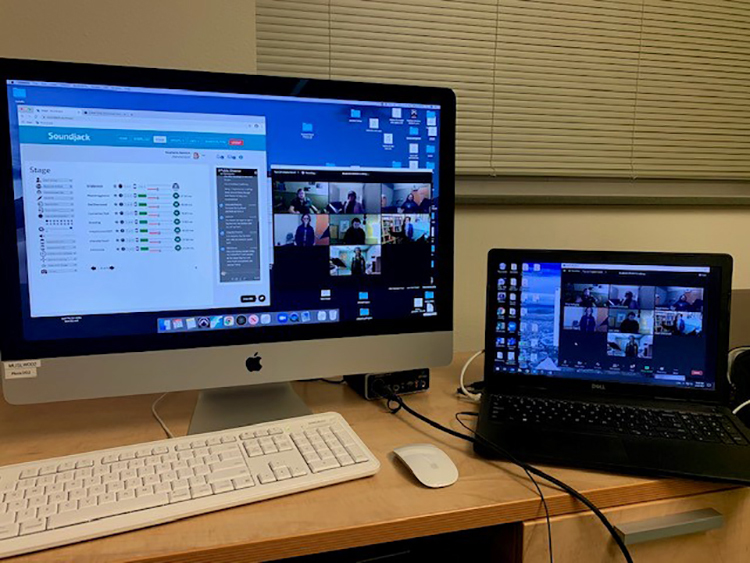