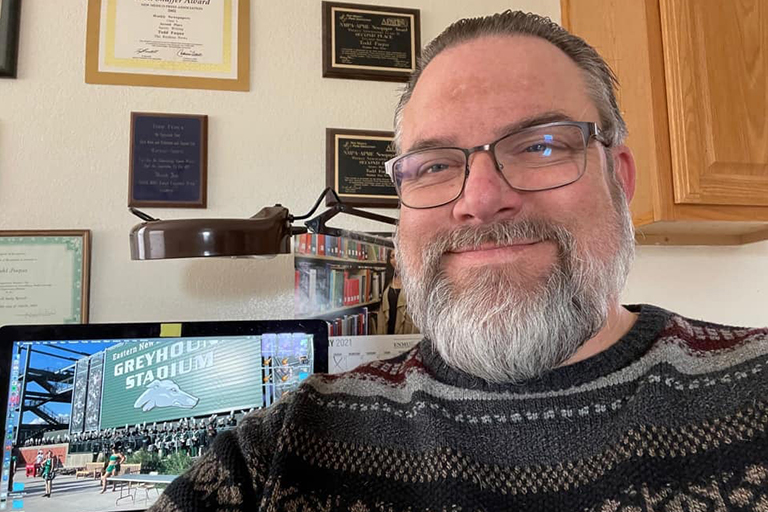 Todd Fuqua, who graduated from Eastern New Mexico University with a Bachelor of Arts in Communication in 1993 and is currently pursuing a master’s in communication from ENMU, recently presented at the Popular Culture Association’s national conference, which took place virtually in June.

Todd, a public relations and graphic design associate for the ENMU Foundation, discusses his research and presentation.

Tell us about the conference and how you were selected to present.

The conference was supposed to be held in Boston but was entirely online due to the pandemic. The conference took place in the first week of June, and I was one of almost 2,000 academics attending. I was encouraged to apply to present by my instructor Dr. Darrell Roe who felt a paper I had recently completed for a class he taught would be an excellent submission. My presentation was one of more than 500 given during the three-day conference.

I’d say it was unlike any other conference I’d attended due to the virtual nature of the whole thing, but this was my first academic conference, period. I had nothing to compare it to. I look forward to next year when it is scheduled to be held in Seattle. Only then (if I go) will I be able to better assess what this conference was like. I will say this: I was surprised at how connected I became to professionals and students throughout the country in the communication discipline. I’m glad I decided to gain this experience.

Discuss your research and presentation.

The paper’s title is “Vice chic: Making violence ‘popular’ through popular music.” It explores the possible connection between how violent scenes in the TV show “Miami Vice” were presented and consumed by the viewing public and how those scenes were made to be “cool” due to the use of popular music by the original artists. During the presentation, I showed two scenes from two episodes of the show that I studied for the paper, pointing out exactly how the violence was framed and how it may or may not have been augmented by the producers’ choice of music.

Which lessons did you learn at the conference? How will you bring those lessons back to ENMU and use them in your career?

Really, this was about me learning what it’s like to be a professional educator at the collegiate level and what it might be like to always be learning about your profession. It was also eye-opening to see what it would take to become a published academic. I’ve been published many, many times before as a journalist. Publishing in an academic journal is a very different experience indeed, with a different threshold of expectations. I plan to further revise my paper and submit it for publication in a regional communication journal.

How did your time at ENMU prepare you for the conference?

Other than the direct assistance and inspiration to submit to the conference from Dr. Roe, my experience at ENMU – professionally and academically – has been a lifelong experience that gave me the tools to create an engaging presentation. I may have never presented at a conference before, but I’ve had lots of experience in academia, media and performance in other areas, so I had plenty of confidence I could do well.

Which professors have helped mentor you during your time at ENMU?

I’ve mentioned Dr. Roe already – he’s the one who convinced me I could present this paper at a conference in the first place, and he’s the one who is guiding me to a possible publication of the paper.

I have yet to experience any classes taught by Dr. Patti Dobson, but her experience has been invaluable to me as a graduate coordinator. I had attempted to earn a master’s degree 20 years before, but various obstacles kept me from completing it. Two decades later, I was faced with the prospect of starting over from scratch, and Dr. Dobson has guided me through the changes in technology and expectations when it comes to earning an advanced degree in communication.

Speaking of my time 20 years ago, I’d be remiss if I didn’t mention Dr. Lee Scanlon, the first communication professor I had as an undergraduate and my first graduate coordinator. He was a harsh taskmaster, his politics didn’t match with mine and sometimes he could be downright unsympathetic. But he taught me the realities of the high expectations placed on a college-level student and college graduate. From him, I learned to develop a thick skin and to push myself to achieve greater things.

Tell us about your education and previous work experience.

I graduated from ENMU in December 1993 with a Bachelor of Arts in Communication, moving on to a sporadic 25-year career in the media. In that time, I’ve worked in radio, television, print and the internet, serving as a photographer (video and still), on-air host, editor, producer, writer and small business owner. All of this prepared me for the job I have now, as the public relations and design associate for the Eastern New Mexico University. Much of what I learned in the field, I’m now applying to my second pursuit of a master’s degree in communication. It’s basically a way to formalize the education I’ve earned in the real world in the past decade and a half.

What are your career goals?

I’m working full time for the University I’ve grown up loving, so I seemed to have achieved my dream job. I’m not ruling out other employment opportunities within the University, but I’m back home at ENMU and have no plans to leave again.

My parents met while attending ENMU – not a unique story – and my father, Larry, spent a 30-year career as the director of Alumni, director of Admissions and Registrar at Eastern. My mother, Cindi, was the administrative assistant to the Math Sciences Department and coordinator of Tutor Services before getting her master’s and moving on to an elementary teaching career in Portales and Ruidoso schools.

As a child, I was a student at the Childhood Development Center, so I was an ENMU student before I was even in kindergarten. My brother and several aunts and uncles have also attended or earned degrees at ENMU.