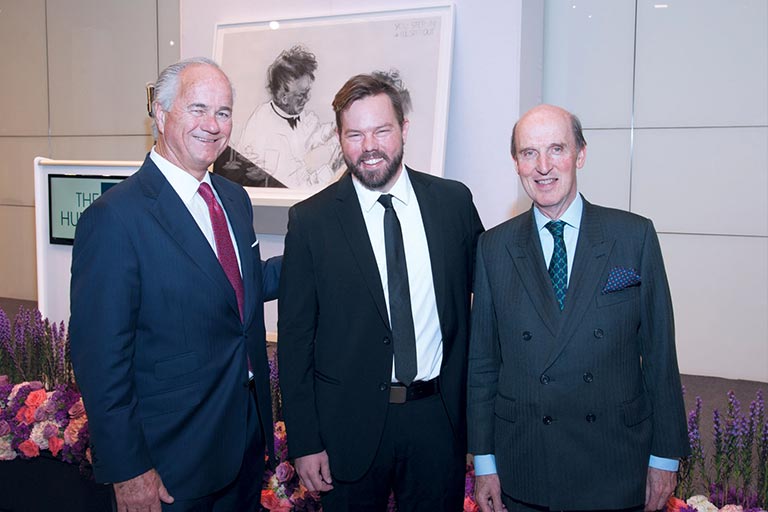 Padaric Kolander, who received a Bachelor of Fine Arts in Interdisciplinary Art and Graphic Design from Eastern New Mexico University in 2002, won the Hunting Art Prize in 2016.

The Hunting Art Prize, which was sponsored by Hunting PLC, an international oil services company, was an annual art competition for Texas artists with a $50,000 award. Artists submitted a single two-dimensional painting or drawing, with a winner being determined through a two-tiered jury process.

Padaric's art was selected by a three-person jury to be featured at the Hunting Art Prize Gala in Houston on April 30, 2016. There were thousands of submissions, and only 110 pieces of art were chosen.

"The jury process is blind every year, meaning they don't know anything about the artist," explained Padaric. "Jurors only judge the actual work. The Hunting Company also brings in new jurors every year, so having a work selected three years in a row was humbling. There are a lot of great works and artists of all styles and mediums."

Padaric shares his experience of finding out that he had won the 2016 Hunting Art Prize:

"My work was in a main gallery area, where I also had a piece shown in a previous year, and I could see it hanging on the opposite end of the room the entire evening and during the presentation. Like every dumb artist, I thought I could win, so I kept looking at my work to see if they would grab it off the wall for the announcement. At some point, I got distracted and an usher kept asking me to move closer to the stage. I thought they needed more room for people behind me.

"Then, they announced my name as the artist selected for the prize. Somehow I made it to the stage, shook hands and mumbled a couple of sentences. It took a long time for it to sink in. I had a great time each year, and the people at the gala could not be more genuine, helpful or generous. The event's marketing coordinator had even purchased my previous two entries. I was just looking forward to coming back. I still hear from people with them and remain in contact."

Padaric has wanted to be an artist since childhood.

"I knew I wanted to be an artist since I could hold a brush, pencil or a crayon," he said. "Being a professional artist began at ENMU. It's been a rewarding grind of a process with plenty of challenges, rewards, ups, downs and turns."

Padaric, who was born in Minnesota and grew up in Rio Grande Valley, Texas, chose to attend ENMU in 1998 because it was affordable thanks to scholarships he had received, and he had never been to New Mexico before.

"I stayed [at ENMU] because of the strength of the Art Department," explained the Kappa Sigma member. "I felt I had more resources and accessibility compared to some friends going to UT in Austin, one of my other choices. I could work in the labs and the studios almost anytime I needed and easily meet with my professors and get valuable criticism and insight."

The art professors also helped their students grow by taking them to professional metal casting facilities for large projects and by going to Santa Fe to speak with gallery owners and visit institutions for hands-on learning.

Padaric enjoyed the flexibility of course offerings in the art program. He completed a "Directed Study" printmaking course where he would meet with his classmate, pull prints every week and receive instruction from multiple professors.

"There were several times my professors went out of their way to help and work one-on-one with students," he said. "I remember another professor giving me huge rolls of paper and cleaning printing plates with me while I worked on a large mixed media piece. She critiqued my color choices and composition the whole time, and it was great. It became a pivotal collaborative piece for me. I tell these stories to my friends, who went to larger universities, and they sort of don't believe me."

He added that his professors were "amazing and always challenged us. I am extremely indebted to them. They were very good at nurturing artistic curiosity while making it clear that you would be going out and competing with other young artists that maybe came from larger art institutions with much larger resources and national recognition. It wasn't really what you wanted to hear sometimes, but it definitely prepared me for where I am now."

For the graphic design aspect of his degree, Padaric found that there was a "really good balance of academia artistic ideals and real-life applications. I learned to prepare for change and keep a larger view of our tools and potential changes.

"The graphic design field has changed so much, and this was around the 'Death of Print.' Film was being replaced, and software solely dedicated to creating websites was just being refined," he recalled. "Adobe InDesign wasn't even around yet. I remember my professors embracing it all, though, and always sharing new trends or potential industry shifts while knowing the history of where it all came from."

"I also knew I needed a profession that could finance my studio time. Luckily, I fell in love with graphic design, and it's worked out pretty well," explained the Greyhound Grad, who now works as a senior graphic designer for the marketing team of NAI Partners, a commercial real estate firm in Houston.

His previous jobs include working as a senior designer and creative director with Alkusari Stone, a high-end residential stone manufacturer in Austin and at Chateau Domingue, a residential design company that mostly works with European reclaimed materials in Houston. During his time at ENMU, he managed the Information Desk in the Campus Union.

"My former spots were pretty creative and rewarding experiences, but I enjoy learning about different industries and the change of pace with NAI Partners has been really refreshing," he explained. "I work with a really great team of people, where I'm able to see a lot of projects go from concept to final product, and then easily shift focus onto my fine art after 5 p.m."

The subjects of Padaric's art have changed over time, but the themes have stayed consistent. He recently returned to working more with animals, but his themes have been about "people's individual view of themselves, and where they stand in society vs. reality or how other people perceive them—what we need to get by vs. what we need to prove and tell others.

"I tend to use a lot of self-deprecating humor and ambiguity to make fun of my own viewers and myself. The men and women are meant to be everyone and anyone. Hands, settings, text and faces are all taken out of context and recombined through a series of studies."

His career goals are to "keep building on each small success and just be able to be proud of my own work. The structure and regular schedule of my design jobs have allowed me to work freely and develop my fine art. It's been a helpful balance."

Padaric, a member of the Visual Arts Association in Houston, lives with his "awesome, longtime girlfriend and our two small dogs. I never wanted kids. I love my nieces and nephews, but felt that was the best thing to never happen to me."

His mother worked as a high school chemistry teacher in South Texas and as a science curriculum director for Katy ISD, a Houston suburb. His father was a "computer programming guru." He has three brothers: two live in Minnesota, and one coaches tennis in South Carolina.

While Padaric doesn't have a role model, his grandfather "remains a big influence on me. He was a rough, warm-beer drinking, Midwestern-German farmer with the odd ability to teach subtle life lessons."

Padaric's hobby, besides art, is music. "Living in Austin for so long sort of spoiled me," he said.

The Greyhound Grad, who has several works set to appear in a Fort Worth show in February, has advice for students pursuing a degree in art: "Its cliché, but you definitely have to be self-reliant and put in the effort now, in the classroom, labs, and studios and push yourself.

"Ask questions and trust your professors' advice, but you ultimately have to do the work and put in the time. No one will do it for you. Graphic design and the fine arts are both really enormous fields with all types of options and specific areas of emphasis. Research and figure out the areas you want to work in."