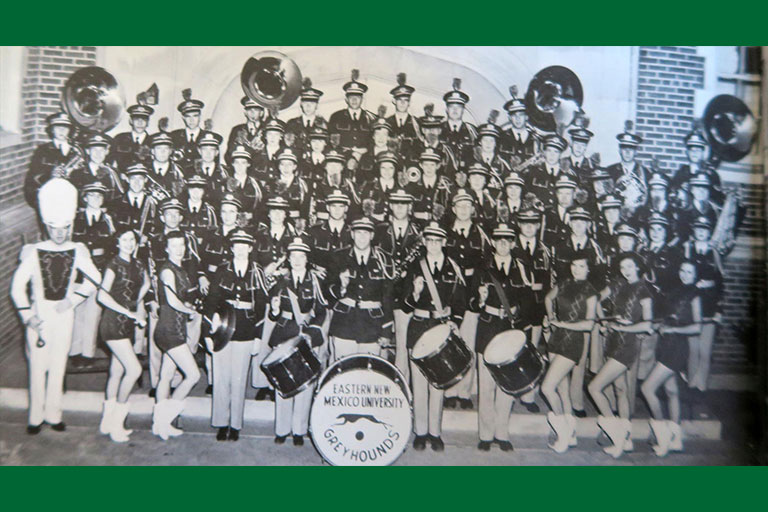 Norvil Howell, 86, recipient of an Eastern New Mexico University Distinguished Service Award, and his wife, Elaine, 78, are proud graduates of ENMU. He has bachelor's and master's degrees in music education, and she has a master's in education.

After graduating from Artesia High School in 1950, Norvil enrolled at Eastern, graduating with a bachelor's in music education in 1954, then receiving a master's in 1959.

"I always wanted to be a band director. Music was all I did in college," Norvil said.

He recalls one of the professors he knew at Eastern.

"One of the guys I worked with was named Bob Page, and he started the Swanee shows at Eastern. He ended up working at Temple University as director of choirs. Today you can buy Philadelphia orchestra recordings with the Temple University choir directed by Robert Page. That shows you the quality of instructors at Eastern."

"I want to tell you this about Eastern," Elaine said. "Out of all the colleges I've attended (Southwest Texas State, West Texas State and ENMU) I enjoyed my classes better at Eastern than any place else. I got my graduate degree from Eastern, and it was the friendliest campus.

"When my grandson started talking about attending college in Canyon, Texas, I thought I'm just going to kill him right now.  Eastern was such a friendly school.

"They've got good instructors, better than average. You can go to a professor and get help if you need it."

Elaine showed her sense of humor when she said about Norvil's devotion to being a band director, "A couple of times I've considered homicide, but I just couldn't face the idea of prison."

She added, "One thing that helped our relationship is I didn't teach music; I taught English."

When asked if that had been a good thing, they both chimed in, "Oh, yes."

Elaine, who didn't retire from teaching until the age of 75, said, "The funniest thing that came out of our grandson's mouth was when he came over to borrow $20 for gas.

"He said, 'Grammy, you just don't how hard college English is.' I laughed because I taught college English for 18 years at Clovis Community College, and two years at Wayland Baptist University."

Norvil and Dustin Seifert, ENMU band director, have become close through the years.

"The name Mr. Norvil Howell is synonymous with high-quality, inclusive music education not only in eastern New Mexico, but throughout the state and, indeed, southwestern United States," said Dustin.

"From his multiple positions of influence in the past, most notably as director of Bands at Clovis High School, director of Music Education for the Clovis Municipal Schools and executive secretary of the New Mexico Music Educators Association, among others, to his continued teaching and performing, Norvil has been instrumental in establishing the standard to which New Mexico programs and music educators are measured.

"He is a music educator of the highest order; admired and respected by all lucky enough to know him. In short, Mr. Howell is a New Mexico treasure."

Norvil said, "One of the things I am proud of was being on the selection committee for the band director at Eastern, and recommending Dustin Seifert for that job. He has done an exceptional job for Eastern."

If you want to know about the character of Norvil, ask a former student.

"I was playing something wrong, so he started playing my horn and talking me through it," said Jerry, an African-American. "I was surprised he put my horn's mouthpiece in his mouth. At that time, that was not something you would expect." Only four years before, Jerry said, restaurants, theaters and swimming pools could legally bar entry to black people. Many stores wouldn't let black people try on clothes or hats.

Norvil was ahead of his time in the struggle for racial equality.

"He stood up for African-American band members when there was still segregation," Jerry said. "There were times they'd have problems on trips, and he wouldn't back down."

"When I started teaching at Muleshoe there was no music at the black school. They had a two-room school in the cottonseed yard across the railroad tracks," Norvil said.

"I asked the superintendent, 'You know I'd like to teach the kids over at that school music, and I've got a free period. Can I go over the railroad tracks and teach them?' And he let me."

Later, two of those students played for Norvil in the CHS band.

Norvil described an incident at a restaurant that happened during a band trip to Enid, Oklahoma. "Charles Love was one of three or four black kids in the band, and he came up and said, 'Mr. Howell, they tell us we have to eat in the kitchen.'

"So I got up and said, 'Band, we're leaving.' The manager came running up to see what was wrong. I told her one of her waitresses said my black kids had to eat in the kitchen and had hurt my kids' feelings, so we're leaving. We loaded up on the bus and went to another restaurant."

Norvil, who was involved with Clovis school bands from 1956 to 1997, said he worked with black, white and Hispanic musicians through the years, and "making music was all that mattered. I never thought about the color of their skin."

Jerry said he considered Norvil "tall and intimidating" when they first became acquainted. But he came to know him as a caring teacher.

"That was pretty cool because he had a reputation as being a hard-driving guy, yet he was also gentle and took time for someone like me who was never going to be a great player," Jerry said in a telephone interview.

When Jerry began working as a reporter for the "Clovis News-Journal" in the mid-1970s, Norvil would stop by the office.

"I would hear him talking to the managing editor, and it just struck me how smart he was and that he had a broad interest in the world outside of music," Jerry said.

"To this day, he allowed me to see the possibilities — to understand that not everyone agreed with segregation. That helped me to look for that in other people."

Norvil and Elaine met at Marshall Junior High in Clovis when she was teaching English in Room 19 and Norvil was on his way to visit another faculty member.

When she stepped into the hallway, she saw him and said, "Hi, how are you?"

"And then when I met his specifications, he called for a date," said Elaine.

This summer they lost their 43-year-old son Mark, a Nevada educator, to brain cancer. At his service at St. James Episcopal Church in Clovis, the room was packed with friends and flowers.

"We just lean on Scriptures to get through," Elaine said.

The Howells have enjoyed quite a ride together, sometimes literally. The CHS band was one of five high school bands selected to perform at the Mid-West Band and Orchestra Clinic in Chicago in 1969.

They could not afford to fly and were turned down by the Santa Fe railroad company to let them travel in two chair cars and a baggage car for their instruments.

"A gentleman by the name of Clyde Marsh was a custodian for the band building and cafeteria," remembered Norvil.

"His brother Ernest 'Maggie' worked his way up to being president of the Santa Fe rail system with offices in Chicago. Clyde and I smoked cigars together."

Clyde contacted his brother, and within days he received a letter informing him the trip for CHS had been approved.

"It just shows you to always treat everyone with respect," said Norvil about his friendship with the custodian.

Elaine said the Chicago Seven were on trial at the time for disrupting the Democratic National Convention.

"As we toured the city we would run into people protesting the trial," she said. "I remember walking through the crowds and telling the students not to talk to or touch anybody. The protestors would say, 'They're the middle class, they pay taxes, they fight wars.'

"But, privately, I was anti-Vietnam."

That was not the only protests the Howells experienced.

The band was invited to perform at halftime of a 1963 Rams football game in Los Angeles Coliseum the same weekend President Kennedy was assassinated. Police lined the field because protestors tried to stop the game from being played.

They returned to the Coliseum to perform in 1973 with Pat Boone.

The band played in Albuquerque for the arrival of President Nixon and his wife on Air Force One during a campaign stop. Protestors surrounded the band, yelling at Nixon while Norvil was trying to conduct.

That led to the band performing at Nixon's second inauguration at the height of the Vietnam War. Once again the band was surrounded by protestors.

Norvil, an only child, moved to Artesia in the seventh grade from Sedan, Kansas, where his dad, a World War I veteran, bought him his first horn for $25. He became interested in music from church, and also sang at rodeos.

While at Artesia High School, he began playing "Taps" for veterans' funerals, a practice he continues, as well as playing gratis at birthdays and other special occasions.

The band won numerous state, regional and national awards. On CD recordings from Norvil's era, the band is indistinguishable from a professional orchestra.

Norvil said his advice to young band directors is to "spend more time with your family. My kids remembered me with a briefcase and a horn case going out the door on a trip somewhere. But my wife was always understanding."

Norvil looked adoringly at Elaine in their living room in Clovis.

"My greatest memory is meeting this little gal, and the little success I've had is due to this little lady sitting right here."