Once a Greyhound, Always a Greyhound: Alumnus Joins ENMU Foundation as Public Relations and Design Associate 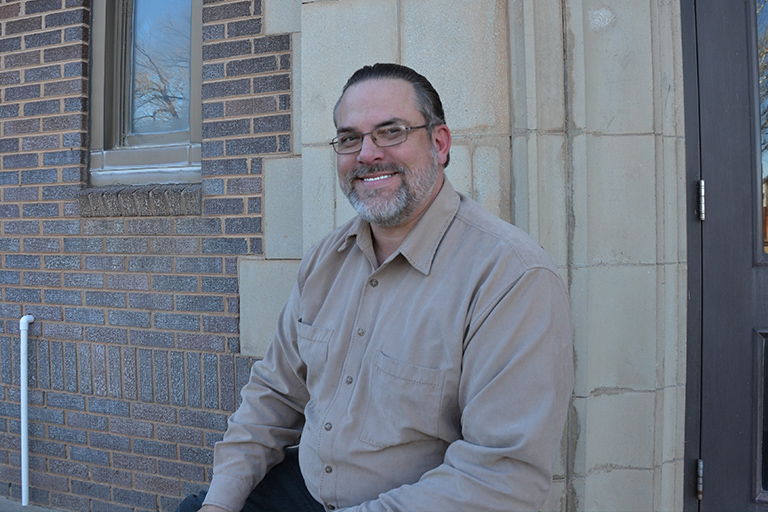 Todd Fuqua is the public relations and design associate for the Eastern New Mexico University Foundation. In his position, he designs the "Green & Silver Magazine," calendar, invitations and other information for alumni. An ENMU alumnus himself, Todd graduated with a bachelor's degree in communication with a minor in graphic design in 1993.

It chose me. I had always been fascinated with radio and television and grew up listening to Skip Carey broadcast Atlanta Braves games on WTBS—back when the Braves were terrible. I didn't care. I would dream of being paid to watch baseball, and I figured my only shot was to try to get a television career. Well, I had one, very briefly. Not long after I graduated, I was working as a news photographer at KVII-TV in Amarillo. That lasted a few months, and then I was back in Portales, wondering what I should do. I began graduate school, but what really changed things for me was a job at the Portales News Tribune. I took exactly one journalism course in college, yet now I had a job as a journalist. It turned into a 25-year career, more or less.

What are your previous jobs?

I used to work for the Portales News-Tribune and Clovis News Journal when those were separate papers. After that, I was a writer and eventual sports editor at the Roswell Daily Record. From there, I moved to Ruidoso (where my parents had retired) and was the sports editor for the Ruidoso News and Ruidoso Free Press. When the Free Press shuttered, I started my own business – FuquaSports.com. I later changed the name to Fuqua Media to reflect the change in focus. I was writing about much more than just sports.

What drew you to this position and ENMU?

My past. I am a child of Eastern New Mexico University. Literally. I was a student at the Childhood Development Center on campus, so I was an ENMU student before I even started kindergarten. We lived half a block away from the campus. My parents, Larry and Cindi, met while they were students here, and my father later got a job as the director of Alumni. That led to a position as the director of Admissions and finally Registrar, or "Registrar Guy," as his vintage business card states. Counting his time as a student, my father had a 40-year career at ENMU. When I told him of this job, he sported a wide grin and called this my "dream job." I agree. I've been gone from Portales for 20 years, and even though so much has changed, it's still friendly and familiar. It's amazing that all the work I did in the print industry prepared me for this job, and it hadn't even been what I was studying to do in college. I was just self-taught.

What do you enjoy the most about your job?

The work is almost identical to what I did while self-employed, but the standard now is much higher. Noelle Bartl (my boss and fellow classmate as an undergrad) is a strict taskmaster. That is not at all as negative as it sounds. She challenges me, and I can already feel myself growing and getting better at this job. I welcome her comments, criticism and suggestions. I wish she'd been doing that for me years ago.

The office atmosphere is wonderful, too. I'm part of the team, and the job is intellectually and professionally stimulating. I also get to promote the school I grew up in. I know I'm not the only person that can say his childhood memories are sparked by walking into the Administration Building, but it's still an intensely personal feeling for me to walk down those halls.

What goals do you have for your position?

I've already registered for master's classes starting in the spring. I was one thesis away from my master's before, but since that was more than 20 years ago, I have to start all over. I don't mind. I'm looking forward to the challenges and to see how I'll change and improve now that I'm studying to formalize the education I earned on my own in the "real world." I've learned a lot in a quarter-century, so I might as well put it in writing.

What is your favorite thing about ENMU?

As I said before, it is home. Now that I'm back, I realize how disconnected I had been from the town and University that had played such a huge role in making me who I am today. I never knew how much I had missed it, and I'm glad to be back on my home turf. ENMU has always been viewed as "the friendly university." The alumni, students, staff and faculty have always viewed Eastern as one big family. I've known University presidents and deans on a first-name basis. It's that welcoming.

Which organizations are you involved in?

I am a member of the First United Methodist Church in Portales. Much like ENMU, the church was the center of my social life, so I don't consider giving my time to the church and its work as a hardship in any way.

What is your family background?

Do you have a family or pets here?

The only pets I'm allowed are my goldfish, Beta and Bob. My parents, in-laws and daughters all still live in Ruidoso. At least I have a reason to get to Ruidoso a lot.

Who is your role model? Why?

It seems like a cliché, but it's my father. His job at ENMU inadvertently shaped who I am. I now live just a few blocks from where we lived when I was a young child, and my dad could walk to work in the Administration Building. There have been days when I've walked to work along Avenue K. In a way, I'm literally walking in my father's footsteps. My dad has always been a happy kind of guy and wants those around him to realize things aren't as bad as they might seem. I've struggled in the past with that, but I have to admit, his optimism has helped me realize I can accomplish just about anything. He has inspired me, even if I haven't told him or realized it myself.

What kinds of accomplishments/awards have you earned?

My proudest achievement has been the numerous awards I won from the New Mexico Press Association while working for the Ruidoso Free Press. I've got quite the vanity wall above my desk at my house. That was when the team at that paper was earning a lot of accolades, and we were all excited to be part of a dynamic news source. All things must pass, though…

What are your favorite hobbies?

Music is one. Not just listening to it or curating it, but making it. I'm a singer (as are my parents), I've played piano and I'm a member of the bell choir at my church. Music has always been a major force in my life, as much as ENMU has been. Oh yes, I've spent many hours in the Music Building, even though I wasn't a music major. I was proud to be a member of the choir under the direction of Dr. David Gerig, to have taken organ lessons from Dr. Bill Wood, to have been a part of the strong music tradition at ENMU.

Where are your favorite places you have traveled?

Disneyland, particularly with my kids. I loved seeing their reactions and experiencing their joy when we've been there. My most memorable trip was probably to Eastern Europe when I was a member of the ENMU Community Choir in Ruidoso. We were part of a mass chorus that sang Beethoven's Ninth and Verdi's "Hymn of Nations" with a full symphony orchestra at Smetena Hall in Prague, Czech Republic. We also performed a concert in Vienna, Austria and had a few memorable days and nights in Budapest, Hungary. I've also been to Seattle, Denver, the Black Hills of South Dakota and many places in Texas. But the most travel I've done has been right here in New Mexico. I've camped and hiked just about every corner of the state, and I never tire of it.

Tell us an interesting fact about you.

Have I talked about how much ENMU means to me?