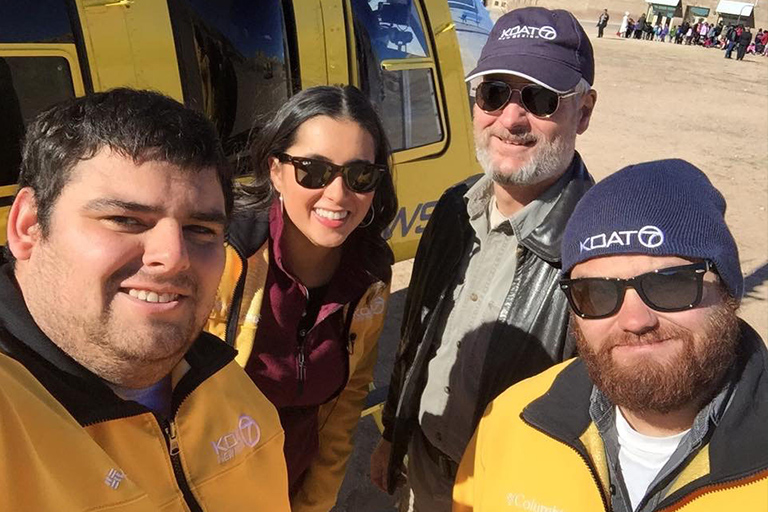 Vincent Rodriguez graduated from Eastern New Mexico University with a Bachelor of Science in Communication with an emphasis in Broadcast Production in the fall of 2012. Since then, the Greyhound Grad has used the skills he acquired during his time at ENMU to make his mark on the world of broadcasting.

The assignment editor at KOAT-TV in Albuquerque, New Mexico, discusses his Eastern Experience:

I chose ENMU because it was close to home [Fort Sumner, New Mexico]. What really hooked me in was while I was in high school, KENW Director of Broadcasting Duane Ryan took me on a tour of KENW and showed me how many different opportunities there were to learn what I wanted to pursue.

I wanted to get into broadcasting since I was a child; I was always fascinated with how television and radio worked, and I wanted to learn how it's all put together and be part of that process.

Which activities were you involved in at Eastern?

I was really involved in the re-launch of Houndwaves. During the summer of 2012, current and former Communication Department faculty and I spent that semester building and furnishing the room where Houndwaves now sits in the Communication Center.

I also spent much of my time working on many different productions at KENW-TV. While with ENMU and KENW, I worked and was an on-air talent for News 3 New Mexico, directed in-studio concerts, helped produce live political debates and hosted part of KENW's annual fundraising drive. I was a writer for ENMU's student newspaper, "The Chase." I also served on ENMU's Student Fee Committee for one year.

My experiences were some of the best anyone could ask for. ENMU had one thing that stood out to me, opportunity. All of my professors in the Communication Department and the staff at KENW all encouraged me every day to take on new challenges and opportunities. I spent most of my time learning and hanging around after work was over to ask, is there anything else I can do? How does this equipment work? Every time I wanted to put in the extra work, everyone was accommodating.

My favorite instructors were Lonzo Lassiter and Dr. Patti Dobson. Those two I now consider family. They were always there for me when I had questions about classes and helped encourage me to take on new things and try new positions in television. Dr. Dobson helped me develop the skills it takes to be a journalist. Lonzo Lassiter really helped develop my skills in the TV studio by helping me understand how the process of television works and by explaining how much of an important role each piece of television equipment is essential for a broadcast. They also went out of their way to make the Communication Building feel like a home away from home.

I would also mention KENW staff members Duane Ryan, Don Criss, Richard Rivera and Mickey Morgan. Those four individuals at KENW really play a role in my ENMU experience. The KENW staff were always encouraging, and pushing me to learn new roles and take on new positions within their production staff. They provided the opportunity for other students and me to really grow and become proficient in all aspects of television. The experience I had at KENW, and with the help of KENW staff, I got set on the road to success when I graduated. There are many, many stories I have at KENW that would be far too long to tell with this article. But those six individuals in both in the Communication Department and KENW I will always credit for teaching me the skills I needed to be successful, and I consider them family.

What is your job title? What inspired you to work in that role?

I am an assignment editor at KOAT-TV in Albuquerque. It sounds like a boring job, but it's quite exciting. I really wanted to work in this role to be more involved in the editorial process of news and newsgathering. The assignment desk never has a dull moment and is always busy, and I like to stay busy. The thing that inspired me most was having the chance to be there and document history.

In my current and previous role at KOAT, I've been on the front lines of some of the state and nation's biggest stories. I've covered things from violent protests to extreme weather. Stories that were some of the most tragic and heartbreaking, to some of the most heartwarming things a person can do. I've been a part of a team that helped an entire community when no one else would. I've investigated stories that have caused changes in policy in some of New Mexico's largest municipalities and held people accountable when needed. I had fun covering college football bowl games and overall experiencing all New Mexico has to offer. It's not really work when you're having fun!

I enjoy working with a really great team of talented journalists who strive to be the best every day. I enjoy speaking up for the little people. I also love the aspect of digging through and investigating stories that shed light on things that waste money and hold people in power accountable when wrongdoing is discovered. Political elections are also a favorite of mine because it's always changing, and very fast-paced.

I've said it throughout this questionnaire, but opportunity. The amount of opportunity that ENMU has cannot be matched anywhere else. Anything I desired to do, the opportunity was there for me to learn and grow my skills. The passion of ENMU's faculty and staff really helped push me to new heights and grow as I went through my time as a student.

ENMU had the tools, resources and equipment necessary to give me that hands-on experience from day one of my time at ENMU. Many colleges don't provide the opportunity to be hands-on from the day you walk in. The opportunities of working on big, professional productions like "Cultura," "Creative Living," "Sportslook," live political debates and live televised concerts really helped me prepare for a fast-paced, stressful environment. ENMU and KENW matched the real-world feel that the television career is.

Having the experience to work on a variety of projects at ENMU and KENW really helped me transition from college to the job world smoothly, and I was a step ahead of other candidates in the job market from colleges much larger than ENMU.

The advice I would give to students wanting to work in my field, and entering ENMU for that matter, is to take advantage of the opportunity that ENMU has to offer. Everything is there, the tools, the equipment, the knowledge, but ultimately, it is up to you to take advantage of it and succeed.

What do you hope to achieve in your career?

I really hope to continue what I am doing now. Side story, when I was at ENMU, I met former ABC News Anchor Sam Donaldson while on the set of a KENW production. The words of wisdom he gave me as an aspiring broadcaster I have followed every day. "You are the voice of the voiceless." That's what I want to continue to do, is be that voice for those that may not otherwise be heard. I love helping others who need help speaking up and being that voice that helps cause change. I also love telling the stories of people who may not otherwise be seen or told that are incredibly interesting.

Right now, I am involved in our stations KOAT's for Kids. During the fall and winter months, we put together drives to help collect winter coats who may need them across New Mexico. For the last two years, I've been able to help collect and distribute coats to children at Fort Sumner Schools. Coming from that district, I knew the challenges some face during the winter, and this was my way of giving back to a school that gave me so much.

Tell us about family and background.

My parents are Vincent and Erma Rodriguez. My dad is also a graduate of ENMU. They are the best parents anyone could ever ask for. I grew up in Fort Sumner and went to school at Fort Sumner High School. I was part of the Business Professionals of America team, taking first place in state competitions. I was part of the Fox Football team and helped create the school's yearbook my senior year.

My biggest influence is my dad. Growing up, my dad always worked hard and helped raise me to be the best I could be. When I was a child, I would always see him helping people and being there when someone needed help. I look up to him because he is the most humble person that I know, who taught me what it means to be a good person, to work hard and appreciate even the smallest things of life. He also was one that never gave up on me. He always supported me no matter what the challenge was I faced. He never let me give up. I will never be as good as my dad, but I hope to one day be an influence and an inspiration to others.

I'm a New Mexico history and geography nerd. I've studied it since I was in preschool. Name any county or city in New Mexico, and I can likely find it on a map or tell you how to get there.

Even though I graduated a little more than eight years ago, I am still a frequent visitor to the ENMU campus. You'll see me at least once a semester talking to journalism and broadcasting classes to share my experiences in the real world. I like to do this because I think it's beneficial for students to see that there is success after ENMU. Just because it's a small school, it doesn't mean you can't achieve big things. I also come back for the homemade cookies that sometimes make their way into the Communication Department. Rumor has it, those are the best in the world.

Vincent in the field during a snow storm in Albuquerque with Reporter Mike Springer.