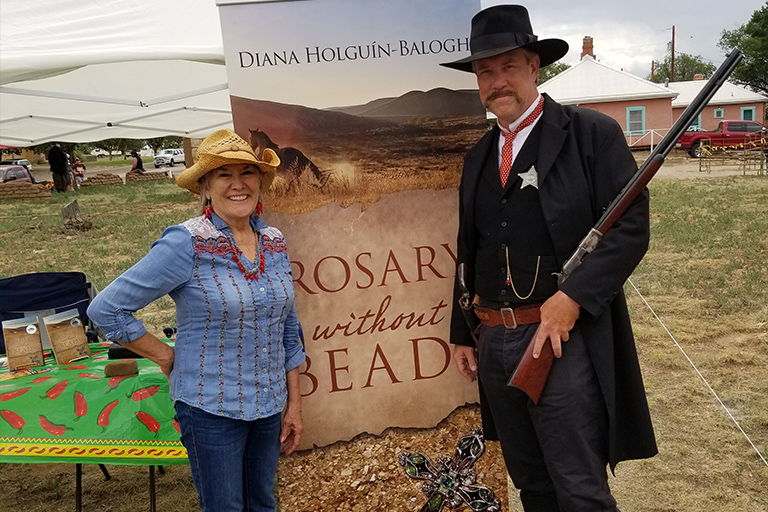 Diana Holguin-Balogh at the 2019 Lincoln County Billy the Kid Pageant book promotion with an actor playing Pat Garrett. Based on his reading at this event, singer-songwriter Roger Dale played his rendition of “Rosary without Beads” from his latest CD "For Crying Out Loud."

Greyhound Grad Diana Holguin-Balogh's debut novel, "Rosary without Beads," was a finalist in the 2019 Colorado Book Awards in general fiction and a finalist for three awards from the 2019 New Mexico-Arizona Book Awards. The historical novel involves the legend of Billy the Kid and the Lincoln County War.

The award-winning author discusses her Eastern Experience and literary accomplishments.

Tell us about what inspired you to write your first novel, "Rosary without Beads."

While attending a cousin's funeral at Mescalero Apache Indian Reservation, my brother walked me across New Mexico Route 70 and showed me the graves of Andrew Roberts and Richard Brewer. Here two combatants, victim and killer, Regulator and House fighter, rested side by side for eternity. The thought fascinated me. Billy the Kid had fought in the Blazer's Mill Shoot-out, and locals, as well as señoritas, loved the bilingual outlaw. Possibilities exploded in my head.

What did it mean to you to have your novel named as a finalist for several awards?

Thank you for asking… The saying goes, a man is not a man until his father says so. In this case, my book was just a book. Among eighty entries, it was judged by librarians, authors, writing professors and literary aficionados. In that process, my novel rose to the top as an award-winning story. Colorado Book Awards honored it one of three in general fiction. New Mexico and Arizona awarded it best in first book, historical fiction and multicultural, taking top prize in multicultural. In short, "Rosary without Beads" gained validation.

Please discuss your other works, such as your academic publications and the Rocky Mountain Fiction Writers' anthology.

At the risk of dating myself, I'll have to take you to the outset of word processing. Using that media at Glendale Community College, two other English Comp colleagues and I designed a self-paced grammar component to coincide instructor-coached writing. The model garnered Innovator of the Year Award for the Maricopa Community College System. Honored as a much-needed student-centered model, we went on to publish "Writing Paragraphs and Essays," which remained robust for 20 years.

When I retired from my teaching career, I wanted a solo literary experience. More subjective and difficult than academic publishing, this venue tested my perseverance. A breaking point came when among ninety Rocky Mountain Fiction Writer entries, my short story, "Telling Bones," was selected. The anthology theme was discovery. Norma, from Anthony, New Mexico, returns home. Forcefully and surprisingly, she re-discovers a long-forgotten supportive culture and meaningful past.

What do you enjoy the most about being an author?

This question strikes a major chord. Recently, in a Zoom book club presentation, I shared that writing allows me to teach. It's no accident, my genre is historical fiction. As in "Rosary without Beads," readers not only learn about 1877 Lincoln County's bloody territorial war, they also gain insight on how the circumstance possibly affected marginalized bystanders. Also, very subtly, with a word here and there, Spanish infiltrates the reading and, perhaps, finds a place in the readers' vocabulary. Fiction is the entertainment; learning is the hidden aim.

A framed fortune cookie message on my bulletin board reads, "Failure is a dress rehearsal for success." Especially in this subjective publishing business, perspective writers take their beatings. What's golden to one agent may be expletive delete to another. However, through rejection, you must believe in yourself. Don't let others define you. Soul search, accept failure as a stepping stone and make your dream happen.

I'm taking myself back to 1966, Alamogordo High. My parents had not gone beyond elementary school, so my exposure to advanced studies loomed uneasy. My sister attended ENMU, so I had visited the campus. The environment offered friendly opportunities, so I, too, enrolled. However, my sister, Lorenza Fisher, whom I had counted on, got married and left ENMU, so I was on my own. At one point, my father, who cashed his U.S. savings bonds to fund me, decided a local job would be a better option for me. Thankfully, Lorenza defended my college aspirations, a fortunate turn in the road. By the way, "Rosary without Beads" is dedicated to Lorenza and a daughter I lost in 2014.

I wish I could say I explored many fields. Rather, I loved words and found English and Spanish rewarding. Little did I know then, that choice would last a lifetime.

Discuss your experience at ENMU.

At first, I imagine like most entering freshmen, insecurity checked me. However, an unforgettable History of English Language assignment on linguistic fluidity changed that. The Spanish I studied differed from the language my parents and relatives spoke. Verbs were chopped; some nouns mongrelized into half-English/half-Spanish; many colloquial words were not in a standard Spanish dictionary. My paper analyzed Spanish of Alamogordo. I hypothesized when the New Mexico Spanish severed from its mother Castilian base in 1821, it had stifled European updates. For example, Spanish Castilian for driving animals, arrear, remained our word to drive a car. Also, closer to American English than European Castilian, we created hybrid English/Spanish words like troca for truck. The A on that paper valued my bilingual background, which I once thought a disadvantage. I apologize if that was more than you wanted. In short, ENMU served as my petri dish for self-discovery.

Alma mater–soul mother, ENMU nurtured self-discovery and allowed me to believe anything was possible.

After ENMU, my first teaching jobs were English/Spanish at Ruidoso High and later Alamogordo Mid-High. For a short time, I was a counselor at Scarlet Oaks Vocational School in Cincinnati, Ohio. After my children gained a good home-to-school start and as they progressed, I expanded my work: first as special needs counselor for limited English-speaking students at Glendale Community College, Phoenix, Arizona; then as English composition professor at the same campus. I completed my teaching career at Front Range Community College in Longmont, Colorado as TESL director and psychology professor.

What are your short- and long-term goals?

At the moment, during this sheltering pandemic, I produced an audiobook for "Rosary without Beads." Daniela Medrano narrates it superbly. It's now available on my website, Audible and iTunes. My work in progress, "Sisters of Crumbling Adobe," portrays Ignacia Jaramillo Bent, wife of New Mexico's first territorial governor, and Josefa Jaramillo Carson, wife of Kit Carson. Their remarkable story covers the end of a Mexican Republic and the beginning of an American-New Mexico territory. Again, I like the obscure Hispanic woman's voice in history.

Which accomplishments and awards have you received?

In my academic career, Faculty Senate representative, master teacher, Innovator of the Year Award and coordinator for Professional Development stands out most in my mind.

Through Colorado Book Awards, I belong to Colorado Speaker's Bureau, where I offer free speaking for classrooms, senior centers, libraries and book stores. Because of COVID, those presentations have been very limited, except through Zoom.

As I alluded to earlier, my father advanced only to the fourth grade and my mother to the eighth. Other than an old Champlin encyclopedia, books, magazines or newspapers were not available. However, my father entertained us with fantastic stories and self-taught guitar tunes. My mother encouraged adventures by listening and laughing. Thirsty for words, my brother, sister and I wore to shriveled thinness the fairy tale section of that encyclopedia. In high school English, I met and loved Charles Dickens' "Great Expectations." The rest, as they say, is history.

Actually, both are ENMU grads–First, Dr. Linda McCloskey Coble, my freshman year roommate. We have shared our children, mourned at funerals, celebrated high/lows and aged together. Like the Dolly Parton/Kenny Rogers song goes, "You Can't Make Old Friends." This rings true. Our bond has evolved over many years and couldn't be just made.

Another is Michael Blake, author of "Dances with Wolves." Although not friends, I remember watching him run for student government president. He didn't win, but he obviously was not deterred by failure. He went on to publish that wonderful novel and film. I admired his fortitude. Not that I reached his cinema accomplishment, but when I recognized him as an ENMU grad and author, I remember thinking if he can do it, so can I.

My freshman year, Dr. Linda McCloskey Coble, my roommate, wanted me to join her sorority. I went through rush. For the last party, I did not receive a final invitation. In those days, rushees were prohibited from talking to active sorority members, so I couldn't find out from Linda what had happened. At four a.m., a surreptitious call from Linda gets through. In tears, she said the girls had been up all night sick with regret. A hometown alum had not given approval for my entry, and they could not get around it. My ethnicity, in her opinion, did not make the cut. My friend ended up quitting that sorority, and now, you may better understand why she is still my cherished friend. Keep in mind that was 1967, and actually, I must thank the alum for lighting a wildfire under me.

My days begin around 6:30 a.m. with writing, nonetheless, more than a hobby. I stop easily and quickly for my grandchildren. Pre COVID, I enjoyed travel, Colorado skiing, and a Spanish speaking group. All things I miss and hope to regain.

Ms. Holguin-Balogh during her dream trip to Holguin, Cuba. "I delivered a copy of ‘Rosary without Beads' to the library. I would love to know how many times it has been checked out," she shares. 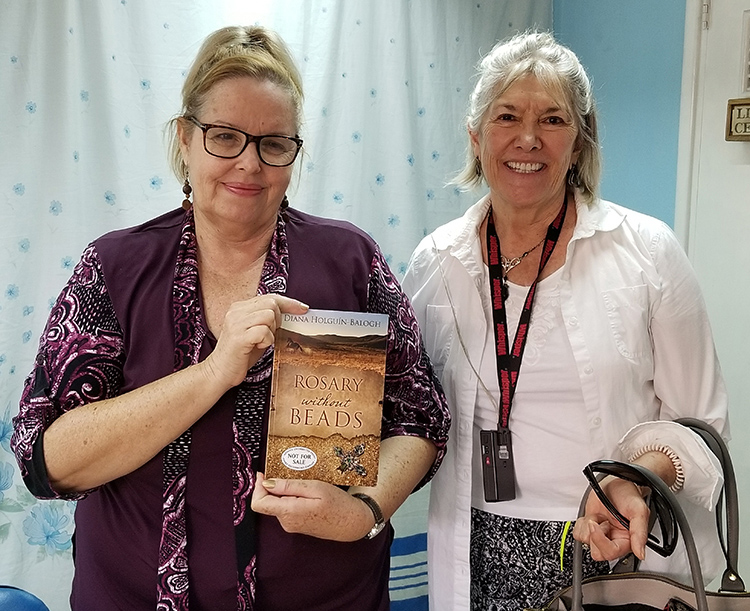