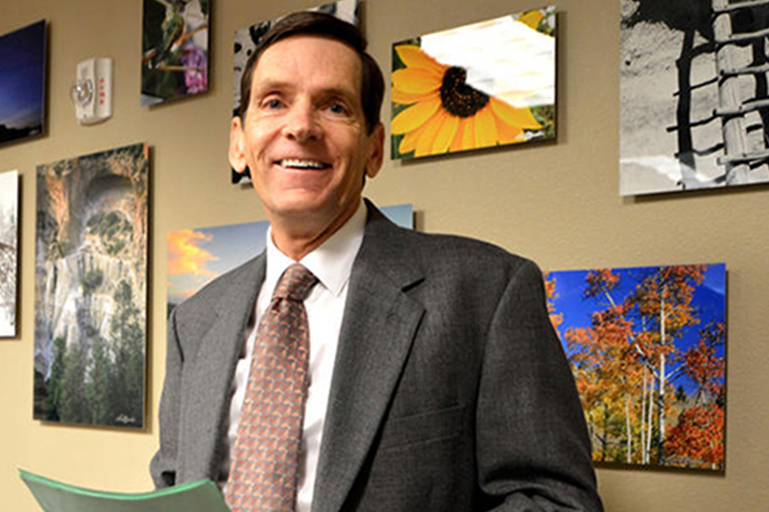 Dr. Kurt A. Steinhaus was recently appointed as the secretary of the New Mexico Public Education Department and will start the role at the end of August.

The Greyhound Grad shares his goals for the secretary position and how his time at ENMU prepared him for a career in education spanning almost five decades.

Congratulations on your appointment as secretary of the New Mexico Public Education Department. Tell us about your new role.

It's an awesome opportunity to help provide leadership across New Mexico. It's a task I've been working toward my whole career, from going to college at Eastern to becoming a teacher in Alamogordo to working for the private sector at Los Alamos National Laboratory, where I ran their education programs, to serving as school superintendent; all of that helped me prepare for the job as secretary.

As secretary, I consider it my responsibility to serve as the state's instructional leader and chief executive officer for education while working closely with school leaders and the community and setting a tone and defining the strategic direction for student success.

What does it mean to you to be selected for this position?

It's a distinct honor to serve as secretary, and I'm all in – going to give it my best.

What are your goals as secretary?

My first goal is to involve teachers, other education leaders, tribal leaders, the legislature, students, and universities as partners in identifying the path forward and in measuring progress.

My second goal is to build essential relationships within the Public Education Department staff and across the state, including legislators and deans of colleges of education.

My third goal is to establish a broad-based coalition to support every single child in the areas of well-being and academic achievement, and to support our teachers and all the staff who are part of the education system.

How did ENMU help prepare you for your role as education secretary?

I think the entire experience at ENMU, the academic experience, the social experience, the opportunity to come back to perform as a member of the ENMU Alumni Band, which I've done several times, and the outstanding ethics and example that the professors set prepared me for this position.

It had the best music education program in the state.

Why did you choose your field of study?

I really wanted to be a teacher and help other kids learn music.

Tell us about your Eastern Experience.

I was very busy studying and performing in band, orchestra and brass choir. I was involved in Phi Delta Kappa, a service organization for music majors. I attended athletic events, concerts, theater productions; there is wonderful campus life at Eastern.

The music performance classes were by far my favorites. I also enjoyed playing in the orchestra pit for a variety show called "Swanee." I also played for musicals and some operas, including Mozart's "The Magic Flute."

My favorite professor was Dr. Harold Popp; he and I are still in contact. He recently visited my house, and he played at our wedding.

Floren Thompson, Louie Berkel and Duane Bowlin were also some of my favorite professors at Eastern.

I met my wife, Jo Beth, at ENMU; we got married after I started teaching, and we've been married for 44 years and have three children.

Tell us about your background.

I grew up in New Mexico and have been here all my life. I'm from a middle-class family, so scholarships helped me tremendously when coming to Eastern as an undergraduate. I remember getting a dorm scholarship and an orchestra scholarship; I just applied for every scholarship there was, and they definitely made a huge difference in paying for school. When I returned to Eastern to work on my master's, I was under a teaching assistant contract for something like $4,000 a year, which was enough to survive.

Which aspect of your career has been the most rewarding?

Teaching students of all ages, all the way from young children to high school students to graduate students to adults, and seeing them grow personally, academically and professionally. Those have been by far the most rewarding experiences for me.

What advice would you give to a student interested in your career field?

My advice would be four pieces, and it sits with the acronym GRAD.

The G is for gratitude: Show sincere gratitude to all the family members and teachers who help you through high school and college.

The R is for resilient. When you bounce back, you learn from what happened, and you're better the next time.

The A is for attentiveness. In this world of technology and phones and texting, it's more important than ever to be able to be present in the moment.

The letter D is for determination. Be determined about your vision to change the world or to graduate from college. Just go after it and give it your very best.

I'm serving as a member of an education foundation's board, and I've served on several boards that  support students and raise money for scholarships.

I'm also a member of the Rotary Club, which has a philosophy of "others before self." One of the big projects we did this year was a fundraiser called Meals of Hope, which, last year, provided 10,000 meals to needy families.

Which accomplishments or awards have stood out the most to you?

I was honored as teacher of the year in Alamogordo Public Schools; that's an award that really sticks with me.

I was also recently honored as Superintendent of the Year by the National Board for Professional Teaching Standards; that was quite an honor.

My role model is my wife. She's an unbelievable person; she's amazing.

I'd like to emphasize that our work includes celebrating, recognizing and honoring the culture, history, tradition and languages of the people of New Mexico. We want the learning for our kids to be culturally relevant for every single student.

I think this work is all about the students. I call us the great triangle. On one corner is the teacher, in another are parents and family, and the third corner is the student. That's what I focus my energy on and will focus on as the secretary of education.