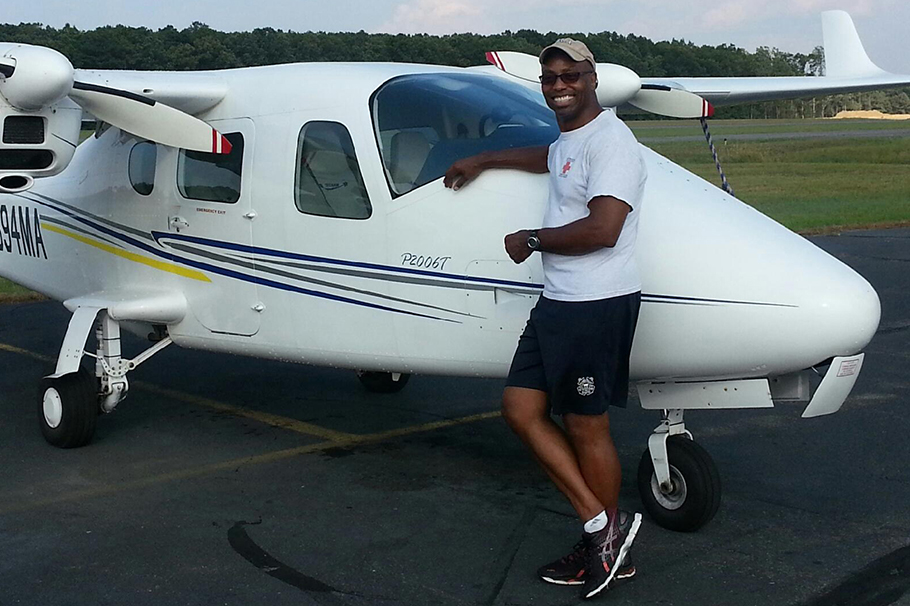 Byron C. Dixon, who graduated with a Bachelor of Applied Arts and Sciences (BAAS) in Aviation Science and Emergency Management from Eastern New Mexico University in 2014, serves as the deputy fire chief in Clovis, New Mexico.

His job duties include providing organization, planning, coordination and direction of operations and adhering to the highest standards for the protection of lives and property.

Mr. Dixon says the most rewarding aspects of his job are "the ability to teach people is really awesome, especially when they really get it; recruitment; and giving that medication that helps saves a patient's life."

His goals are to "do my best, move our department forward and to groom a successor."

Mr. Dixon, who was born and raised in Washington, D.C., chose to attend ENMU because "The school is military friendly; they accepted my Associate of Applied Science (AAS); and half of my classes were online."

He selected the BAAS program because he holds a Federal Aviation Administration (FAA) pilot license and has an extensive background in fire and EMS.

During his time at Eastern, Mr. Dixon attended two homecomings and enjoyed his classes with Dr. Timoty Whicker in Aviation and Lawrence Nelson in Emergency Management.

He shares that his experiences at ENMU, especially in Emergency Management, helped him when he was the branch director for Deep Water Horizon and helped him get promoted as a commissioned officer in United States Coast Guard.

Mr. Dixon, who holds a graduate certificate from the George Washington University (GWU) in leadership as a certified public manager, is a lieutenant commander (LCDR) in the United States Coast Guard Reserve. He retired as captain of the fire department in Arlington, Virginia, and as deputy director for the U.S. Coast Guard Museum. He was the recipient of the Life Safety Award for response to the Pentagon in Arlington on 9/11.

His gives advice to students interested in pursuing a similar career path: "Both fields, Emergency Management and Aviation, are wide open. Enjoy the ride because they fluctuate with time."

When asked about his role models, Mr. Dixon names his parents, saying, "My dad with his 'can do' spirit and my mother who worked three jobs at one time as they are both very supportive of my dreams and goals."

Mr. Dixon volunteers for SOME (so others may eat) soup kitchen and donates blood every four months. He also completed two angel flights as a pilot.

His favorite hobby is flying, especially helicopters, and he plans to take on fencing and tai chi as his "next challenges." He is also anticipating his "next adventure" of flying tour helicopters on small islands.