Green and Silver Memories: The Son of a Greyhound Grad Discusses His Father’s Eastern Experience 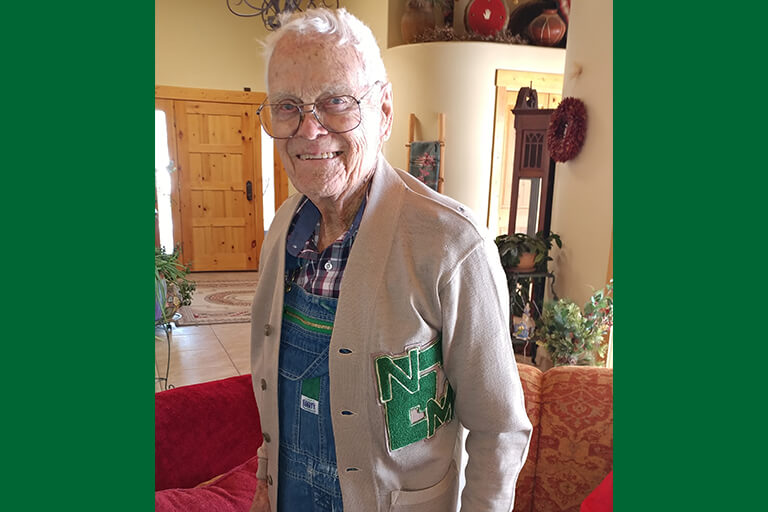 Green and Silver Memories: The Son of a Greyhound Grad Discusses His Father’s Eastern Experience

He came to ENMC in the fall of 1946, just a few years after it had grown from a junior college. He came at the request of Coach Al Garten.

Garten had been associated with Eastern since 1936 when it was a junior college. He would act as football, track, basketball and boxing coach along with holding athletic director duties for 28 years, retiring in 1965. He would be inducted into the NAIA Basketball Hall of Fame.

Garten's Greyhound football team had not played during the war years of 1942 through 1944. This was not unusual. Due to gasoline and rubber rationing, travel was limited. The military draft required every young man to register at age 18 and be eligible for service at that time.

Even high schools had to abandon sports since players would leave school for the military abruptly during the season. New Mexico State University also ceased its sports for the duration.

So, Garten had to start from scratch with the football program in 1945. He recruited players from schools that didn't even play high school football. They came from places like Roy, Grady, Melrose, Lingo, Rogers and Dora.

When the season started, there were 25 men ready to play Greyhound football. They were all freshmen.

They were all reported to be 17 years old. None of them had college football experience, and most had not played any high school ball.

The team took it on the chin in six games, scoring only 13 points during that short season while giving up nearly 50 points per game.

One of their scores came on the opening play of the game with a long pass against Colorado Teachers College (now Northern Colorado University). It must have made the Colorado team mad because they went on to score the next 69 points. The Greyhounds also lost to UNM, 78-0.

My father was part of the 1946 freshmen class. He, too, had not played high school football. The Greyhound football program was still building and continued to recruit from smaller schools.

Joe had married that summer to his high school sweetheart, my mother, Jane (Mayberry) Ford. He had not planned to attend college, but his father made a call to a fellow Mason brother, Dr. Floyd Golden, the President of ENMC. They arranged for Joe to go see Coach Garten and the rest is history.

Mom and Dad were able to live in “Vetville,” a set of small houses for war veterans expected to enter college under the GI bill, even though Dad was not a vet. They would live there until some veterans enrolled and needed that well-deserved housing.

I have all of my dad's annuals. I noticed that, at 150 pounds, he was a lineman and got significant playing time, lettering in football and basketball. The average size of the Greyhound line was 183 pounds.

By the time he was a senior, he and all of his teammates from those early years were all on the junior varsity. That was because Coach Garten was able to recruit some better athletes as time went on.

Dad has never complained about being relegated to a minor role in ENMU sports. He enjoyed every minute and had long-lasting friendships from those years at ENMU.

My favorite story is about traveling back from a basketball game, probably in Silver City. They ran into a snowstorm and had to spend the night in Vaughn.

It turned out that Vaughn had scheduled a game that night, and their opponent couldn't get through the snow. So, ENMC said they would play Vaughn instead. They did, and Dad said the high school team clobbered them.

My dad taught school in Aztec, New Mexico, for three years in the 1950s but found that his true calling was in the real estate world. He enjoyed a very successful career in Aztec and in Bayfield, Colorado, where he continues to live.

For Christmas one year, I had his old gray sweater cleaned. It has green stripes around the sleeves and a large ENMU letter on the left breast. It is his letterman's sweater. He still wears it on cold Colorado nights.

Mom and Dad were married for over 75 years. Mom died in late March at the age of 93.