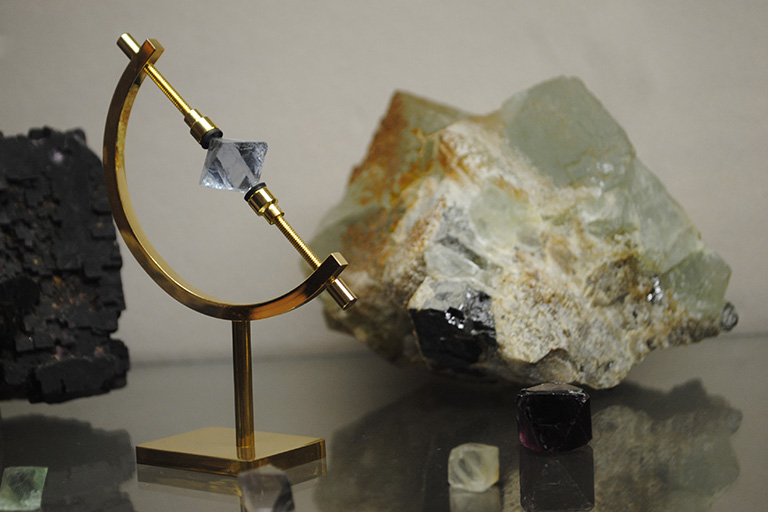 I recently visited the Dr. Antonio “Tony” Gennaro Natural History Museum and Miles Mineral Museum, both of which are located in the Roosevelt Science Center, for the first time in the eight months I’ve been at Eastern New Mexico University. After my visit, I decided to find other museums in the area so I could share my experiences with you. This is the first of three entries in my ENMU-seums series focused the University-sponsored museums you can find in Portales.

Rather than simply talking about the museums themselves, I felt it would portray my visit better if I shared the photos I took while I was there. Hope you guys like animals and rocks, because I know I do after my visit.

These photos only cover a small number of species and types of rocks overall, but I can assure you there’s a wide assortment in the museums. By the way, I don’t know the gender of any of these animals. I default to male pronouns.

Starting with the Dr. Antonio “Tony” Gennaro Natural History Museum, this is one of two snapping turtles that the museum keeps. This one is closer to the door, and he’s just sitting underwater like a kid in a swimming pool when they try to sit at the bottom of the pool. He’s living the life, you know?

This is a common musk turtle. I think he’s cool because he looks sort of like a dinosaur you’d see in “Jurassic Park.” I’m a fan of this one not just because of that, but also because the light in the tank is tinged lightly with blue and it just gives a cool look. Plus, you can tell the turtle’s swimming, and that’s just neat.

I don’t know if you guys have ever seen crawdads before, but here’s your chance. I saw one in a river once when I was 14, and I thought they were kinda freaky, but this guy turned me around on that opinion. Look at him! He’s just waving and saying hi! Love this guy.

This is a long-nosed snake. When I visited, he was hiding in a little log inside of his enclosure, and I ended up with this photo of him looking at me with what I assume is curiosity. But he’s just peeking out! Look at that little dude. Looking at him makes me want a snake. I don’t know if this species is fit as a pet, though.

This mean-looking snake is a western diamondback, which is the snake the baseball team chose their name from and the creature type of the secondary villain in the 2011 Gore Verbinski film “Rango.” He looks awesome, and he’s hovering over a bowl of water in this picture.

This is the one photo that sort of creeps me out, actually. It’s a tiger salamander, but the size of its mouth makes it look like its smiling. Kinda freaky looking, and that lighting is a little ominous, but he looks much cuter in person. He’s got these big old eyes, and it makes him look like a Pokémon, which I love.

Moving on to the Miles Mineral Museum, we have these neat-looking gemstones. What really stood out to me was the thing that’s holding the blue one there. Forgive me for my informal terminology. I don’t know what most of these are called, whether it be the instruments or the stones. Regardless, it won’t stop me from appreciating how cool it looks.

Alright. Here’s the thing. I LOVE space. If I could explore the cosmos but there was a 150 percent chance of dying in some horrible space-related death, I’d take it in a heartbeat. How cool would that be, right? With that lead-in, these are iron meteorites shards. These were a part of a 5,400-plus pound meteorite that fell in Arizona 50,000 years ago. I’ve even been to the site, and I didn’t realize it until I wrote the article! That’s right, this is from Meteor Crater in Arizona—a meteor impact crater that’s almost a full mile long. The compounds from the meteorite shards helped confirm that the same basic elements you can find in Earth can also be found in space, which is another awesome subject entirely. Not to mention, THESE ROCKS USED TO BE IN SPACE! That’s so cool. I wish I could be that successful.

I won’t be able to one-up what I said about the meteorite shards, so I won’t even try. These gems are halite and blue halite, but you know them by another name: rock salt. Yes, this is dinner salt in its pure form. It looks cool, doesn’t it? I know that the blue part is because of some sort of impurities, which is something I can’t really explain. I looked it up. I’m not smart enough, guys. My knowledge of geologic formations and rocks can be summed up in a simple way: rock look good to Dillon. 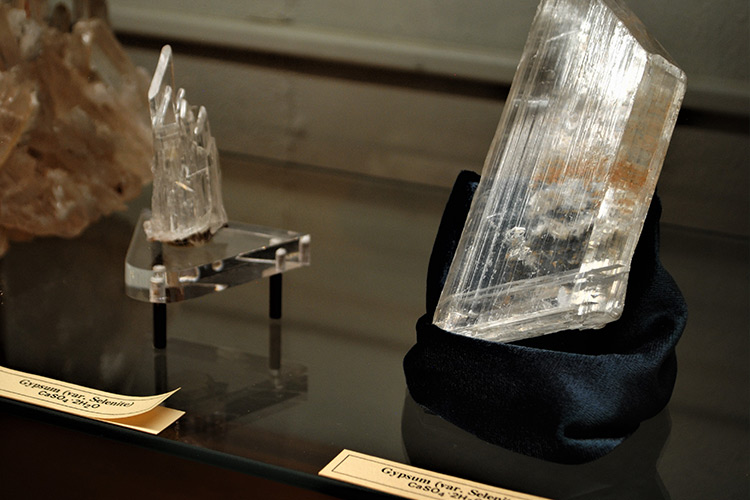 I can speak a little bit more about these rocks. Have you ever been to White Sands? That’s not actually sand, but gypsum. There’s a lot of mineral history I don’t quite understand well enough to explain, but the basic point is that there used to be shallow seas where White Sands currently is. When these seas dried out, they left gypsum in their place. The mountains to the west erode and create gypsum sand. Although that’s technically a different mineral as far as I know, the picture above is a purer form of gypsum that looks super awesome and palatial.

Those are the coolest things I found in both museums, but that doesn’t mean that’s where you should stop thinking about it. Both museums are in Roosevelt Science Center next to the Post Office and are free to students. Operating times are Monday to Friday from 8 a.m.-5 p.m. The museums close during University holidays.