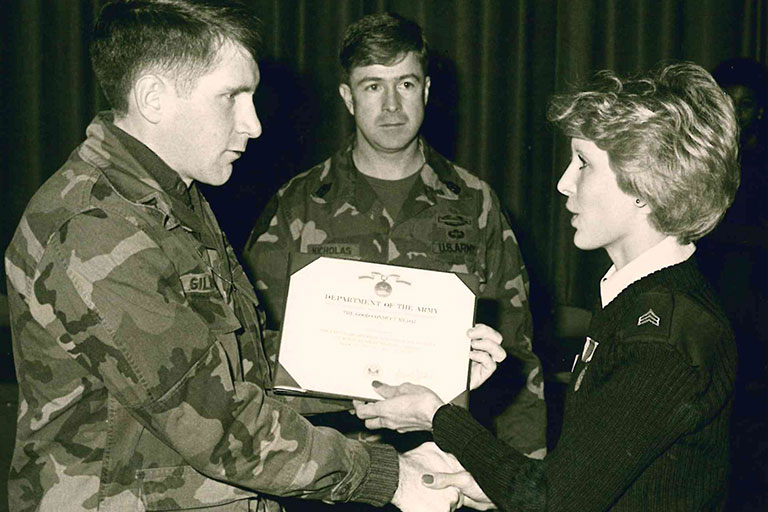 She has also established a veterans-assistance telephone line in her office (575.562.2195) and fields questions or issues veteran students have and/or directs them to the appropriate office/person. She also emails self-identified veterans with information they may not have, but can use, or sends them leads on employment/career fairs. (Dr. Robert Schneider assists her.)

She organized the first Veteran Resource Event this year and would like to continue that tradition at ENMU in the coming years.

A "newbie," Gretchen started with ENMU in September 2015, and "feels fortunate to be so warmly included into the ENMU family.

What Gretchen likes most about her job is her boss--Clark Elswick. "I don't say this because annual evaluations are due [laughs], but because Clark is a 'groomer,' a manager who gives you challenges and mentors you to the next level. I am pretty high energy and appreciate those challenges."

The least favorite part of her job is "mundane, repetitive tasks. I was an executive secretary over 30 years ago, so the administration tasks are pretty easy. When you put everything together at the end of the day, though, this position is rewarding."

Gretchen has an associate degree in general studies from Macomb Community College in Michigan and a Bachelor of Science in Management from Park University. She is currently a grad student at ENMU in the College of Business, pursuing a master's degree in business administration (MBA).

She first went into the Women's Army Corps (women weren't allowed in the regular Army then) in 1973, during the Vietnam era. She went to basic training at Fort McClelland, Alabama, secretarial training at Fort Jackson and was stationed at Fort Ord, California. Gretchen was "encouraged" to agree to a discharge for pregnancy after almost two years.

Seven years later, she decided to go back into the Army (it was combined, men/women by that time), so she enlisted again—and had to go back through basic training. From there, she went to training in communications at Fort Gordon, Georgia. Her assignments included Fort Campbell, Kentucky, Heidelberg, Germany, Fort Hood, Texas and San Diego, California.

"The most exciting times were in the Emergency Action Center in Germany," Gretchen said. "If you ever saw the movie 'War Games,' it was similar. I had to walk through the war room to get to our office. We called all the alerts in Europe, monitored nuclear weapons storage sites throughout that part of the world and took 'incident' reports that involved military, their family members or Department of Defense civilians. This is back when the 'Wall' was still up and there was an East Germany."

Her favorite times were recruiting in her hometown of San Diego.

"That was a rewarding job for me, and helped for me to have a successful corporate recruiting career when I left the Army," Gretchen said.

After the Army, she joined Robert Half International and helped to start other recruiting companies similar to them (example: AccountingSolutions in Austin). In her last recruiting position with Robert Half, she ran five of their divisions and managed 35 personnel.

She was also with Pitney Bowes for six years and was their Enterprise Solutions Consultant of the Year for North America operations. When Nebraska Furniture Mart opened their largest store ever in the Dallas area, they recruited her and one other person to hire over 2,000 people in a few months.

"That was a huge challenge," Gretchen said. "I have loved every job I ever held."

A few years ago, Gretchen decided she wanted to give back to her fellow veterans, so she left the corporate world to become a Disabled Veteran Program Specialist for the State of Texas.

"It was extremely rewarding for me to help veterans or their family members. I've always helped companies make a lot of money, but this job was, by far, the greatest job I ever held," Gretchen said. "I helped veterans get jobs, complete medical paperwork, enroll in school, etcetera."

Gretchen ended up in Portales two years ago when her step-father passed away and her mom needed help. Her three sisters are now in the area, too.

"They are my heroes with what they do for my mother and family every day," Gretchen said.

Getting close to retirement, she would like to finish her MBA so she can teach 100/200 level business courses on a part-time basis--hopefully, at ENMU or possibly at CCC.

Gretchen also loves house projects--anything from tiling to painting to whatever. She also quilts.

Her happiest moments were "when my twin daughters, Julie and Jennifer, were little and we were exploring the world. The saddest moment was when I had to leave the Army for a medical disability."

Gretchen's hometown is San Diego, but she went to school in Portales for a few years when her parents had a dairy.

"San Diego was great--birthday parties at the zoo, weekends at the beach," Gretchen said. "When we came to Portales it was initially a shock, but I quickly learned how great the people are here. I used to think of it was like Mayberry….does anyone remember that show?"

Besides her twin daughters, Gretchen has three teenage grandchildren who live in Florida and Arizona.

"Your life is what you make of it," Gretchen said. "If you aren't satisfied, it's up to you to fix it."

Gretchen, who says her family and her work with veterans are her most rewarding passions, has two items on her bucket list: 1. Visiting the Caribbean and 2. Deciding where to retire, if it's not Portales.

"Everyone needs to leave their mark on the world," Gretchen said. "What you do today is how you will be remembered."