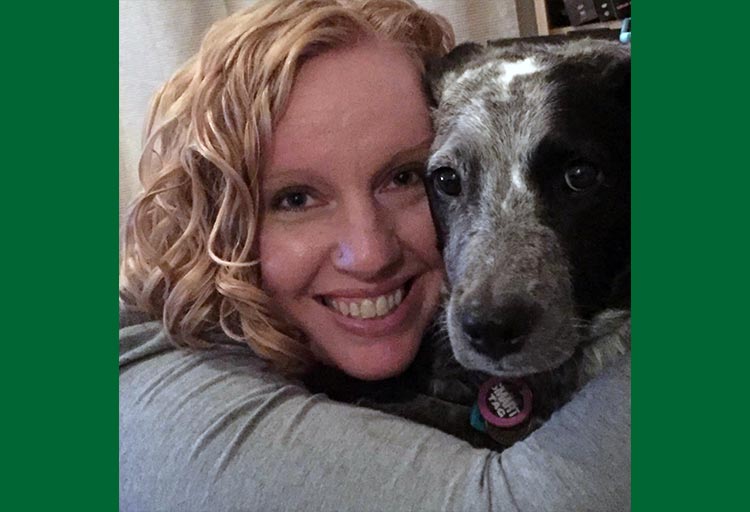 Melissa Broz with her dog Anna.

Melissa Broz began working as the executive secretary for Academic Affairs at Eastern New Mexico University on Oct. 23, after serving as the senior secretary in the College of Fine arts for three years.

"It is interesting seeing how everything I've done in my previous positions has been a stepping stone to the big picture of Academic Affairs," said Melissa, who started at ENMU in fall 2011 as the department/MBA secretary for the College of Business, then moved to the nursing program as their secretary.

"I've learned from the ground up what processes build on each other level by level. I think that will help me in my new job; knowing what has to happen before the information gets to the Office of Academic Affairs."

Her new duties include everything academic-related. "If it involves academics, it happens in this office," she explained. "I'm still learning, so stay tuned!"

She was drawn to the executive secretary position because she "really wanted to contribute to the University in a higher capacity, build more relationships and see the heart of the institution."

Melissa explained that the transition to Academic Affairs had a "giant learning curve. There's just so much to know!

"Fortunately, I have fantastic resources who I hope will still answer when they see my name pop up on the phone for the billionth time that day. I can tell you one thing: I'll never be bored in this office."

Her goal is to focus on team building and training for the academic support staff, as well as recognizing their hard work.

"I know in the College of Fine Arts, the department secretaries are fantastic, and they work hard," she said. "I think that as a campus, we really need to let the secretaries know how much we appreciate them."

She is looking forward to working with people who she hasn't had the opportunity to work with before.

Melissa was born and raised in Lubbock, Texas, then moved to Reston, Virginia, a few weeks after she got married to Dr. Charles Broz, who is now an assistant professor of family and consumer science at ENMU. The couple has two "sweet rescue girls: Anna, our sweet, fat blue heeler, and Abby, our weird, beautiful black cat."

She worked in retail and managed a video store for many years, then worked at the Container Store, which she dubbed an "organization freak's paradise," in Virginia.

"After living in the D.C. suburbs for two years, I was so ready to come back to this area," she said. "I can't imagine living anywhere else."

She loves the people at Eastern. "From the faculty and staff to the students and administrators, ENMU has been very good to us."