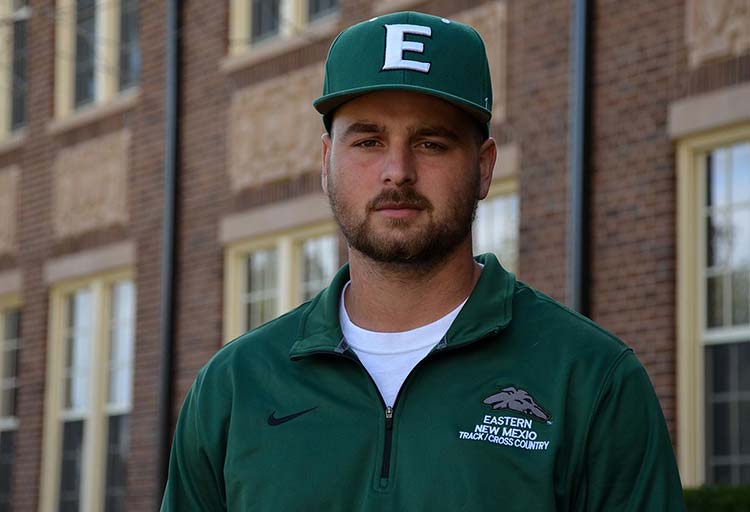 "I really want every student to get the best student-athlete experience," says Aaron Gordon, the new assistant track and field coach at ENMU.

Aaron Gordon has joined the Greyhound family as the new assistant track and field coach at Eastern New Mexico University.

Aaron, who is from Waco, Texas, specializes in sprints, hurdles and jumps.

He was previously an assistant coach for track and field at Bacone College in Muskogee, Oklahoma, where he led his team to many record-breaking awards. The team finished in 11th place at the 2015 indoor national meet, which was the highest finish in the program's history.

"As a coach, I really want every student to get the best student-athlete experience," he explained.

Aaron found his love for track and field during his high school years in Clarendon, Texas. He was the district champion in the high jump and won a silver medal at the Texas 1A state meet. He also excelled in football as a receiver, defensive back and all-state kicker.

He continued his track and field athletic journey at West Texas A&M, where he competed in 40 track meets (indoor and outdoor) and posted a best of 2.00 m in the high jump. He also played football as a freshman and sophomore before going full-time with track.

"It's interesting to be [at ENMU], even though WT are the rivals," joked Aaron, who received a Bachelor's of Science in Sports and Exercise Science from WT. The United States Track and Field Level 1 Coach also has certified specialist endorsements through the United States Track and Field and Cross Country Coaches Association in the following disciplines: jumps, combined events, strength and conditioning and technical training.

During his time as a private coach for the West Texas Wings Elite Pole Vault Club in Amarillo, Aaron's team had two-time UIL state qualifiers and eight-time UIL regional qualifiers. They were three-time area champions and five-time district champions.

Aaron says he has always had a "hard-working mentality. I love to win."