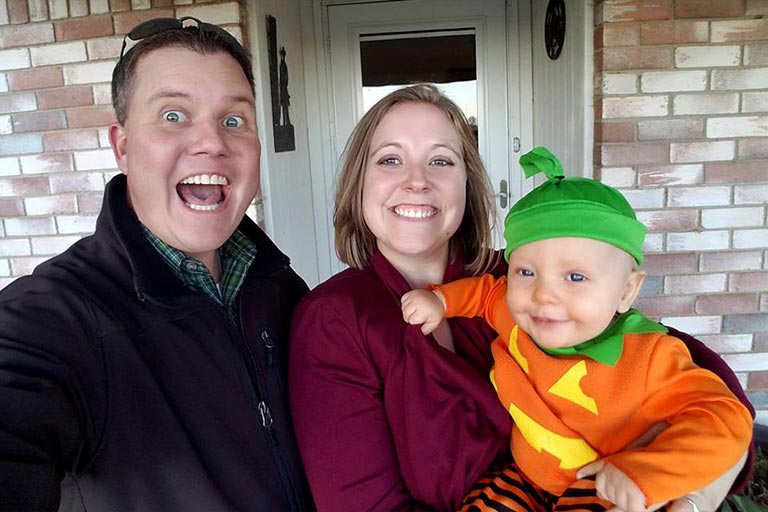 Brent Small with his wife, Jessica, and their son, Aiden.

Brent Small, director of Financial Aid at Eastern New Mexico University, jokingly says he learned a lot from working with cows in previous jobs that helps him in his current job.

His first job was working for Rustin Rowley, Ryan Figg and Robin May at Clovis Livestock Auction as a yard hand.

"I learned a lot of important lessons working cattle that I apply situations to every day, at work and home," Brent said. "For instance: One, you cannot, and I emphasize cannot, reason with an angry cow. Two, sometimes you have to watch out for the little ones; they will lay you flat out cold in the middle of an alley when you least expect it. Three, if you get bucked off, get back on again, but first, consider what stupid thing it was you were doing to get bucked off in the first place. Four, make a hand: doesn't matter what you are doing make a hand and do your best; if you see something that needs to be done, just do it you will earn 'atta boy' points. Robin May get credits for that."

Brent began working at ENMU in the fall of 2000 as a work-study student in the Department of Family and Consumer Sciences and Agriculture. Olympia Chino was his first supervisor.

"In the spring of 2001 I was complaining loudly to the secretary in the Financial Aid office, Laura Southard, that I had not been awarded work-study for the coming year and Olympia was not going to be able to hire me, and that I didn't have a job any longer," Brent said.

"Laura offered to let me work in the Financial Aid office, and, somewhat stunned, I accepted. I still don't know if she offered me the job out of kindness, or if it was vengeance for being angry at the front desk."

His staff and he are responsible for the processing of all federal, state, institutional and outside funding that students use to pay their bills.

Brent says he "loves the people I work with every day. I think it is a calling to work in the financial aid industry, and all of us seem to have found a good niche in Financial Aid. Besides the people I work with, I enjoy watching students change the direction of their lives, some intentionally, some with a little prod now and then. I know I could not have gone to college without financial aid, and I want to be able to help others do the same."

He says the hardest part of his job is "the part where you have to tell a student or parent no or that they lost eligibility for something."

Brent says growing up in Portales he didn't always appreciate the small town. But each time he visited Albuquerque, Dallas or Houston, it reminded him how much "I like being able to drive to work in five minutes, and to visit with every other person you meet at Wal-Mart."

He graduated from high school "in the big city, Dora, New Mexico. There were 16 of us in our class, so we were all involved in everything. I was into FFA and AG, and still am."

He received a Bachelor of Science in Agriculture from ENMU. "I tell folks with all the bull we deal with in Financial Aid I still feel like I put my degree to good use," Brent said with a smile.

After being hired by Laura in Financial Aid, he worked his way up through the ranks. He has also served as the interim director of the Campus Union and the interim Registrar twice.

Brent plans on staying at Eastern for the foreseeable future, but wants to use his degree at some point to possibly teach vocational studies or agriculture in high school. He has also considered becoming a Department of Education training officer for Federal Student Aid, most likely his next step.

His hobbies include "building things and working with my hands. My wife, Jessica, and I have a sizable flock of chickens that we raise for eggs. I have a classic truck that takes a lot of my money, and I aspire to play the violin. I almost have 'Mary had a Little Lamb' down, and it has only taken two years," he laughed.

Brent says he has lots of happy memories, but his "top three are marrying my lovely wife, the birth of our son, Aiden, and graduating with my bachelor's degree the same day my mom, Rita, graduated with her master's."

Born and raised in Portales, Brent has two older siblings and "one sort of kinda adopted-ish sister, Bonnie." His brother, Randy, and sister, Pam, are 15 and 17 years older, so he "grew up sort of like an only child. Pam, Bonnie and Randy would all tell you I am the spoiled baby."

His dad was a meat cutter and market manager for several grocery stores in the area, including Safeway, Russel's and Lowe's. His parents also owned Clovis Custom Slaughter for a number of years. His mom started college in her 40's to become a teacher and retired just a few years ago from Clovis schools.

Besides his human family, "like the 12 days of Christmas, we have one horse, two dogs, nine cats, about 30 chickens, 15-ish guinea fowl and three turkeys."

His goal in life "is to leave the world a better place than it was when I arrived. Helping people accomplish their goal of a degree is definitely a part of that."

Brent follows two general philosophies: "The golden rule of treating others as you want to be treated, and the idea that we should all enjoy every minute because we don't know how many we have left."