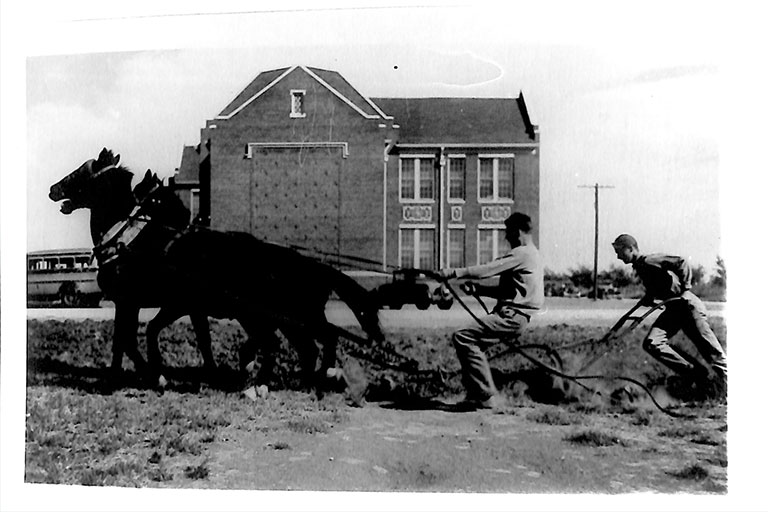 The Administration Building in 1935.

Although the New Mexico Legislature approved a new college on the eastern side of the state in 2012, including setting aside 30,000 acres of public land to generate funding, the issue was dormant until a renewal of interest in 1927.

Dr. Floyd Golden, author of "The Golden Years: 1928-1960," wrote that few people in the six-county area (Union, Quay, Curry, Roosevelt, Chaves and Eddy) were even aware of the constitutional provision.

The revival of interest in 1927 came from the Roosevelt County Chamber of Commerce. The members believed that the school was definitely needed and that Portales was the appropriation location since it was in the center of the six-county area. Soon, the Chamber asked the legislature to locate Eastern New Mexico Normal School in Portales.

Even though the Constitution provided for it, there was nothing to require the legislature to actually create a school. Arguments against a new school were that there was no need for it and the state was far too poor to afford an additional institution. Opposition also came from other schools, and could also be expected from the other counties on the eastern side which might want the school located in their county.

A group from Tucumcari briefly fought to have the new school located there but withdrew the request after seeing the futility of their efforts. The Senate passed the bill locating Eastern New Mexico Normal School in Portales without opposition on Feb. 23, 1927. The House then passed the bill, which was signed by Gov. Richard Dillon.

Records show that 305 Roosevelt County residents contributed from $5 to $200 for the purchase of land for the school. The Chamber of Commerce purchased approximately 43 acres of land for the school at its present location. The land was offered for free to the Board of Regents to approve plans to build the school, except for $3,000 for a farmhouse and other improvements located on the land.

Shortly after, a sign was placed on the land: "The Future Home of Eastern New Mexico Normal School."

During that time, through a survey 426 students were identified who showed an interest in attending Eastern.

In 1929, through the efforts of Dr. Floyd Golden, the legislature appropriated $62,500 for Eastern to begin construction on the Administration Building.

The Underhill Construction Company of Amarillo, Texas, submitted the low bid of $55,500. By Oct. 2, 1930, less than a month after winning the bid, construction was underway. By Dec. 19, construction had progressed far enough for the cornerstone (a stone forming a part of a corner or angle in a wall; specifically, a stone laid at a formal ceremony) to be laid.

Some 2,000 people witnessed the laying of the cornerstone by the Masonic Grand Lodge of New Mexico.

For the people of Portales, the laying of the cornerstone was a political as well as educational event. They were convinced that no appropriation from the legislature would be forthcoming without some tangible evidence that progress was being made. They felt that they could go to the legislative session of 1931 with more hope of success.

The Great Depression delayed further appropriations from the legislature, but in 1933 funds from the public land dedicated to Eastern's use had generated over $57,000.

The Board of Regents began planning for opening the school in the summer of 1934. One unit of the Administration Building had been completed three years earlier and was where classes would be held.

There were no streets, sewer, water or electric lines on campus. Seventy-five men worked two eight-hour shifts a day to plant 450 Chinese elms on campus, and 50 men worked on getting sewer, water, power lines and streets installed.

These men were paid by the federal government as part of the Public Works Administration to combat the Great Depression.  Most of the work was done with picks and shovels with a minimal amount of equipment, providing more hours of work.

The Administration Building had been sitting for three years unused with no maintenance, and "had deteriorated so badly it was a disgrace. At least half of the windows had been broken, some of the outside doors had been broken or blown off their hinges, and livestock had used the building for shelter during the winter months and as a refuge from the hot sun in the summer."

After repairs, plans were made for a big celebration on Thanksgiving day of 1933.

Since there was a strong rivalry between Clovis and Portales with an afternoon high school football game always played on Thanksgiving day, it was agreed that Thanksgiving morning would be a good time to honor the people who had worked so diligently to make Eastern a reality.

Approximately 7,000 people gathered for a program to celebrate the opening of the Administration Building on Nov. 23, 1933. Fourteen beeves were slaughtered to provide barbeque, and Gov. A.W. Hockenhull was the main speaker.

"It was a very appropriate way to celebrate the imminent opening of the college that had been so long in the planning stage," wrote Dr. Golden.