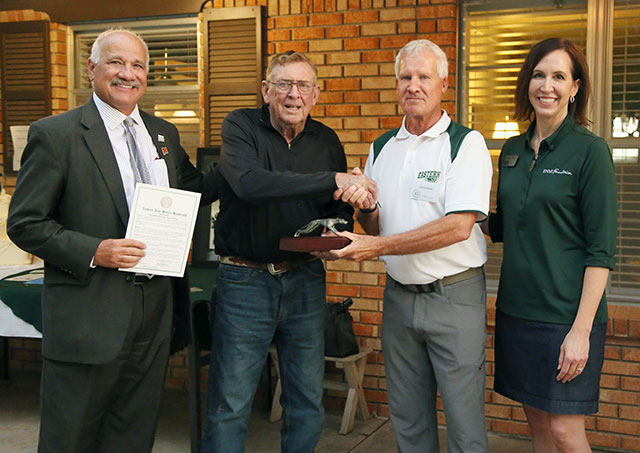 Current ENMU Foundation President Stephen Doerr underscored the decision to honor the two alumni. "Janie and Buck represent the core of the ENMU Foundation. Their love for Eastern and their legacy of dedication planted the seed that established the ENMU Foundation as a private entity," he said. "The founding board members dedicated thousands of volunteer hours over the years to support ENMU students and advance the institution. Volunteers at this magnitude are one of a kind!"

Moberly was a founding member of the Friends of Eastern Foundation (now known as the ENMU Foundation) and served as vice president for the foundation from Aug. 2, 1978, until Oct. 6, 2007. She continued to serve on the foundation board an additional 12 years amounting to an impressive 41 years of volunteer leadership and service.

Moberly also served as a regent for Eastern New Mexico University from 1979 to 1989, contributing careful attention and insights to University issues. Few members of the ENMU family have contributed as selflessly, as visibly or as loyally as Moberly; she and her husband Dr. Jacob Moberly represent the best examples of commitment to and support of ENMU students.

Wilson was also a founding member of the Friends of Eastern Foundation and served as president from 1978 until 2002. Since then, he has continued his service as treasurer for the organization. Over the years, Wilson's extraordinary contributions to ENMU have been recognized through his receipt of the ENMU Alumni Association Distinguished Service Award in 1972, his induction into the ENMU Athletics Hall of Honors in 1992, and his honor of being named the first-ever ENMU Foundation Volunteer of the Year in 2002. With 41 years (and counting) of volunteer leadership, Wilson continues his generous support for the University, ENMU students and future ENMU scholarship recipients.

His contributions are not limited to service to his alma mater, as Wilson has also contributed significantly to higher education in New Mexico. He served on the ENMU Board of Regents from 1979 to 1984 and on the New Mexico Commission for Higher Education from 1989 to 1995.