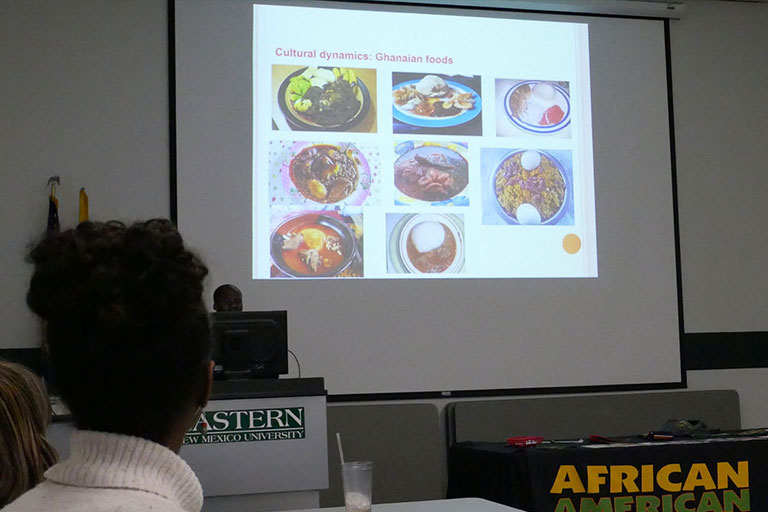 Jones Adjei, an international student, gave a presentation on Ghana.

"Ghana has a rich cultural heritage," Mr. Adjei said. "The tradition, the people, the music, the languages are unique."

The graduate student showed the audience photos and videos about the African country located along the Gulf of Guinea and the Atlantic Ocean.

The ground is very fertile for agriculture, according to Mr. Adjei. Because of its riches in natural resources, the natives had to struggle to free themselves from colonial powers who wanted their resources.

According to Wikipedia, Ghana, with a population exceeding 27 million, is bordered by the Ivory Coast in the west, Burkina Faso in the north, Togo in the east and the Gulf of Guinea and the Atlantic Ocean in the south.

The first permanent state in the territory of present-day Ghana dates back to the 11th century. Numerous kingdoms and empires emerged over the centuries, of which the most powerful was the Kingdom of Ashanti.

Beginning in the 15th century, numerous European powers contested the area for trading rights, with the British ultimately establishing control of the coast by the late 19th century. Following over a century of native resistance, Ghana's current borders were established by the 1900s as the British Gold Coast. It became independent of the United Kingdom on March 6, 1957.

The 1992 constitution divides powers among a president, parliament, cabinet, council of state and an independent judiciary. Ghana is a democratic country led by a president who is both head of state and head of the government. The government is elected by popular vote.

Ghana's growing economic prosperity and democratic political system have made it a regional power in West Africa.

Located only a few degrees north of the Equator, Ghana has an area of 92,099 square miles, with an Atlantic coastline that stretches 350 miles on the Gulf of Guinea in the Atlantic Ocean to its south.

Ghana is closer to the "center" of the Earth geographical coordinates than any other country.

Grasslands mixed with south coastal shrub-lands and forests dominate Ghana, with forest extending northward from the south-west coast of Ghana on the Gulf of Guinea in the Atlantic Ocean 200 miles and eastward for a maximum of about 170 miles, with the southern part of Ghana being a primary location for mining of industrial minerals and timber.

The climate of Ghana is tropical, and there are two main seasons: the wet season and the dry season.

English is the language of the state.

Ghana is surrounded by French-speaking countries; French is a widely taught language in schools and universities, as well as a language used for commercial and international economic exchanges.

Ghanaian cuisine is diverse and includes an assortment of soups and stews with varied seafood. Most soups are prepared with vegetables, meat, poultry or fish. Fish is important in the Ghanaian diet with tilapia, roasted and fried whitebait, smoked fish and crayfish all being common components.

Ghanaians use many different cloth fabrics for their traditional attire. The different ethnic groups have their own individual cloth. The most well-known is the Kente cloth. Kente is a very important Ghanaian national costume, and clothing and these clothes are used to make traditional and modern Ghanaian Kente attire.

Different symbols and different colors mean different things. Kente is a ceremonial cloth hand-woven on a horizontal treadle loom and strips measuring about four inches wide are sewn together into larger pieces of cloths. Cloths come in various colors, sizes and designs and are worn during very important social and religious occasions.

The music of Ghana is diverse and varies between different ethnic groups and regions. Ghanaian music incorporates several distinct types of musical instruments such as the talking drum ensemble, fiddles, lutes and log xylophones. The most well-known genre to have come from Ghana are African jazz.

Ghanaian dance is as diverse as its music, and there are traditional dances and different dances for different occasions.

Over one million tourists visit Ghana each year.

According to Mr. Adjei, the Gold Coast was the name for a region on the Gulf of Guinea in West Africa which was rich in gold and also in petroleum, crude oil and natural gas. It now forms the country of Ghana.

According to theculturetrip.com, as early as the 1500s, foreign powers' interest turned to the slave trade in light of the growing demand for human labor in the New World (the Americas and the Caribbean).

"From holding gold, ivory and other wares, the castles gradually imprisoned slaves, who were reduced to yet another commodity. The majestic fortresses along Ghana's breathtaking coast housed dark dungeons, overflowing with misery and despair. It is estimated that six million African slaves were shipped to other countries. About 10-15 percent perished at sea.

"The castles were the ultimate stop in many ways. They provided the last experience that men and women had in their homeland before their final departure. For those who didn't make it to the new world, the castles were the last place they ever saw on land. The last shreds of hope would wither away with every day of captivity in the castle.

"On the seaboard side of the coastal slave castles, was 'the door of no return', a portal through which the slaves were lowered into boats, and then loaded like cargo onto big slaving ships further out at sea, never to set foot in their homeland again and with a final goodbye to the freedom they once knew."

"Ghana was the first country in West Africa to become independent (1957) from British colonial rule," Mr. Adjei said. "Now Ghana is a free country and everyone in it has the freedom to achieve justice."