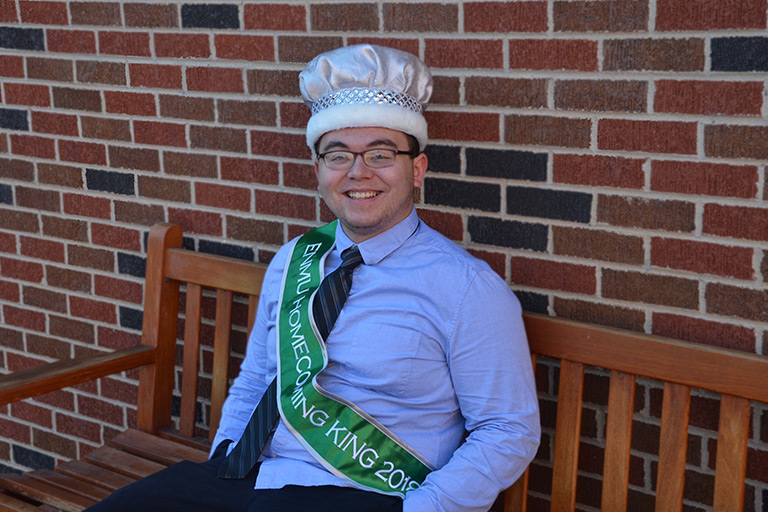 Clay Enderez, the 2018 Homecoming King at Eastern New Mexico University, shares what the new leadership role means to him and his dream of becoming a counselor to help people with mental illness.

Why did you decide to run for Homecoming King?

The reason why I decided to run for Homecoming King was that I wanted to show my Eastern spirit in a new light. I originally was not going to do it, but when I was asked to be the candidate for Kappa Sigma, I was happy about it.

My Homecoming experience was great. It started with Songfest on Monday, and it was so great to participate with my brothers of Kappa Sigma; we worked hard on it, and the fact that we won was a great time!

After that, I was at the Powderpuff game to support all my friends and brothers who were either playing or coaching that night.

Finally, at the bonfire, I was super nervous the entire time, I had some tough competition, so it was nerve-wracking for me, but when they called my name, I was so happy. I was extremely thankful for everyone who had supported me through my journey and without them, I would not have been able to do it.

What does it mean to you to be named Homecoming King?

To me being Homecoming King means that I am someone who shows off good leadership that had the students' support.

What are your responsibilities as Homecoming King?

There are a few events I have to attend over the year, but other than that, there is not much until next fall.

What part of being Homecoming King do you look forward to the most?

I look forward to inspiring students to show them that anyone can do something if they put their mind to it.

What advice do you have for students who may be interested in running for the Homecoming Court?

My advice for students who may want to run for Homecoming Court is to make sure to branch out and go out of your comfort zone. That was the hardest part for me since I am socially awkward, but I am glad I did it since it turned out great.

What is your major and classification? When do you expect to graduate?

I am a double major in psychology and sociology. I am a junior and will be a senior next semester. I expect to graduate in fall 2019.

Which academic honors have you had at ENMU?

I have been on the Dean's List since fall 2016. I was "Coordinator of the Year" for ASAB for the 2017-18 academic year, and I received the William Baldwin Scholarship for Psychology.

What activities have you been involved with outside of the classroom?

I am a part of ASAB and Kappa Sigma. I have been a part of Eastern In Action for the past two years and volunteered at the Duke City Marathon in Albuquerque for two years in a row.

Tell us about why you chose ENMU.

I chose ENMU because of the campus. When I took my tour my senior year of high school, I did not really think I was going here. I only took my tour because my mom wanted me to but once I was on it, I fell in love with the campus and have not regretted my decision coming here since.

Tell us why you are proud to be a Greyhound.

I am proud of being a Greyhound because I bleed Green and Silver.

What high school did you attend and year did you graduate?

I graduated from Clovis High School in May 2016

My parents' work for the Clovis News Journal and my sister is attending graduate school at WNMU.

My hobbies are hanging out with my friends and Brothers. I enjoy listening to music and playing video games.

What do you hope to pursue as a career?

I want to be a counselor and help people with mental illness.

What do you hope to ultimately achieve in your career?

I want to have my own practice to be able to help people at the most affordable cost and to make people not be afraid of their mental illness.

Besides your career, what other dreams/goals do you have?

I dream of traveling; I would like to spend some time abroad to immerse myself in a different culture.