ENMU Royalty: Interview with the 2019 Homecoming Queen and King 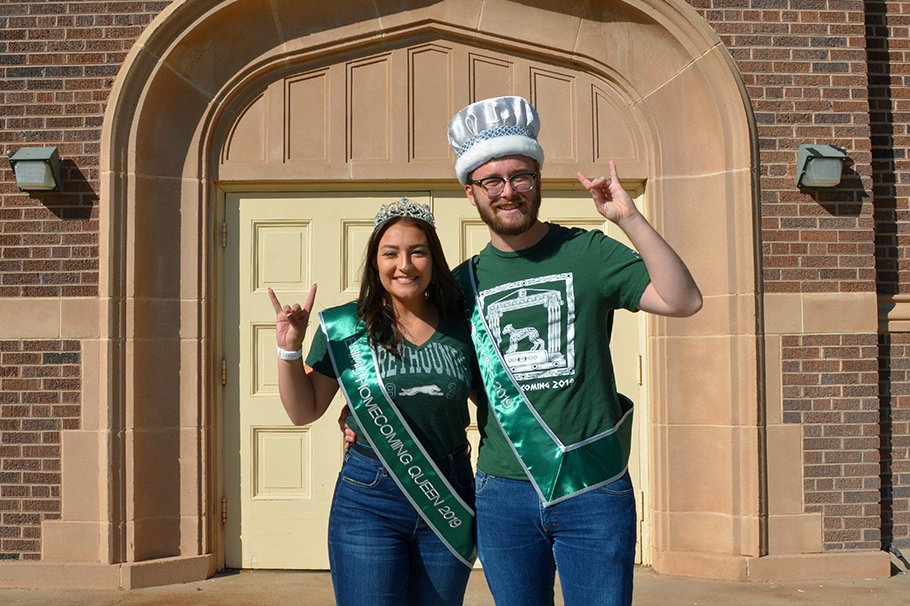 ENMU Royalty: Interview with the 2019 Homecoming Queen and King

Homecoming at Eastern New Mexico University this fall had plenty of memorable moments, from seeing festive floats in the parade to cheering on the football team to defeat Texas A&M Kingsville. The biggest highlight for two students was becoming ENMU Royalty.

Kaitlyn Shim, a criminal justice major with a minors in psychology and business, was crowned Homecoming Queen, and Blake Ahrens, who is majoring in forensic science with an emphasis in biology, received the title of Homecoming King.

The duo sat down with the ENMU News to discuss their crowning moment:

What motivated you to run for this royal role?

I gave a speech to my chapter at our Monday meeting as to why I think I would be Zeta's best candidate. I ran against two other members, and my chapter voted for me, so then it became official, and I filled out my application the day it was announced, and it hit me that I was running.

Blake: I decided to run for Homecoming King because I was strongly encouraged by my fraternity brothers in Kappa Sigma as well as my girlfriend, and I decided to give it a shot.

Kaitlyn: My Homecoming experience has been amazing. To start, I had so many ideas on how to campaign. My boyfriend had amazing ideas to help me since he is a business major and is good with knowing how to advertise for Eastern, which helped me a lot. I had my entire chapter back me up on so much of my campaigning and a lot of friends outside of Zeta that helped campaign.

It was a very positive experience. I met so many new people and organizations through this experience, which was my goal. Regardless if I won or lost, I wanted people to know me and still see me as a positive role model or just a positive advocate/face for Eastern. Now that I am Homecoming Queen, it just keeps getting better and better.

Blake: My Homecoming experience was truly unreal. The amount of Greyhound spirit demonstrated by the student body, the large alumni presence during homecoming and the overall pride with the University was a great thing to behold.

What does it mean to you to be named Homecoming Queen/King?

Homecoming Queen means being that advocate for ENMU, and I want to be that in the best possible and positive way. I've always been extremely social, happy and present at everything I do, that now having this title, gives me a reason to spread that to the community, around this University and to friends and family back home. My title has reached a lot of people I've never talked to before, and I've gotten nothing but positive feedback on my campaigning and me as a person since, and that's what made the two weeks of long campaigning worth it.

Blake: It truly means a lot to me that I was named Homecoming King. It was a humbling experience to know that my fellow Greyhounds named me to be a representative of the University in this fashion.

What are your responsibilities as ENMU Royalty?

Blake: It truly means a lot to me that I was named Homecoming King. It was a humbling experience to know that my fellow Greyhounds named me to be a representative of the University in this fashion.

Which part of being Homecoming Queen/King do you enjoy the most?

Kaitlyn: Ever since being crowned ENMU's Homecoming Queen, I have had the honor of riding in the parade and being introduced at halftime of the Homecoming game. During the parade, I had little girls get so excited to see me, and they would shout, "There's the Queen, There's the Queen," and that made me extremely happy and reminds me who else I am a role model for when I didn't even realize it. The same thing happened when I went to change in the restroom before going onto the field for halftime. A little girl saw me and started jumping up and down shouting, "Mama, there's the Queen." This, by far, was the highlight of being Homecoming Queen.

Other than that, I have really enjoyed meeting new people who randomly come up to me and tell me they voted for me, and I've never seen nor talked to these people before. Because of this, I stop them and ask for their name and try to have a conversation with them; this allows me to meet new friends and get positive feedback on what I did that caused them to want to vote for me. It's made me truly realize that hard work pays off.

Blake: The part of being Homecoming King that I like the most is the overwhelming support and fun that I have had interacting with everyone involved in the process. I had never thought that I would ever put myself on a platform like this in my time in college, and the fact that my closest friends believed in me in doing so was an awesome feeling.

What advice do you have for students who may be interested in running for the Homecoming Court?

Kaitlyn: The best advice I can give the next set of students who run for Homecoming Court is to utilize your campaigning in the best way and make sure your face and name is everywhere. You can't be lazy with yourself or campaigning, you can't give up when it gets mentally draining and you need to be able to talk to people you don't necessarily know. Be comfortable going outside of your comfort zone. Hard work really does pay off. The best reward, in the end, is realizing your determination and love for this school to represent it, was worth it.

Blake: The advice that I have for those interested in running for Homecoming Court is that even if you don't feel like you are outgoing enough, try it anyways. You never know what you are capable of unless you actually try. Once you take the first step and decide to do it, ask for help from your friends and they will do more than you ever expect from them.