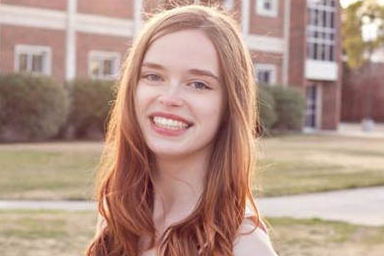 Gaia Sargent attended Eastern New Mexico University after she saw the FBI recruits graduates from Eastern’s “highly accredited” forensics program. “It was perfect,” she said. Gaia was born in Boise, Idaho, where her parents raised her.

"It was perfect," she said.

Gaia was born in Boise, Idaho, where her parents raised her. In 2008, her father was laid off due to the recession, but was offered a higher paying job years later at Intel in Albuquerque, New Mexico. Her family moved to the Albuquerque area in 2010 when she was about to begin eighth grade.

"It was kind of weird starting over," she said. "Eighth grade was an awkward year; I pretty much spent it alone."

Though the move was tough, she felt like it gave her the knowledge to help other new students.

"My experience gave me the tools I needed to help others not have to suffer as much," she said.

She decided to attend ENMU after a friend recommended the forensics program to her. The junior first became interested in forensics in middle school while watching NCIS with her dad.

"Abby Scuito struck a chord with me because of her quirky character and just how she is, so I'd always listen to her scenes. Her integral part of the investigation really resonated with me," she said.

The forensics major with an emphasis in chemistry plans to graduate from Eastern with her bachelor's degree in fall 2018.

"I believe Eastern has given me so many opportunities. I'll be able to do the faculty research. I'll be able to apply for the fast track to the master's program. That means I can have dual undergraduate and graduate status so I can graduate faster with my master's. It's going to be awesome," she said.

She hopes to become a toxicologist for FBI one day. In order to achieve her goal, she will apply for the fast track master's program in spring 2018. If she gets accepted, she will begin in fall 2018. After her master's, she wants to work at Sandia or Los Alamos labs. She also plans on applying for competitive internships, such as the FBI internship, to gain more experience in the field.

"It's a competitive job market, so I'm going to be in school for a long time," she said.

She is also considering earning a doctorate down the road.

"Without Eastern, I would probably not be where I want to be for a lot longer. The faculty research for the specific degree that I'm in has helped me immensely," she said.

While at ENMU, Gaia has been a member of the Zeta Tau Alpha Fraternity, where she served as the treasurer, and the Forensics Society.

"I believe that being a part of those organizations helped me become a leader," she said.

The hard-worker got married to the love of her life in October 2016.

"Without Eastern, I wouldn't have found my husband. I wouldn't be where I am today. I would probably not be as close as I am to reaching my goal without Eastern. This school has made me who I am and has given me the tools to succeed," she said.