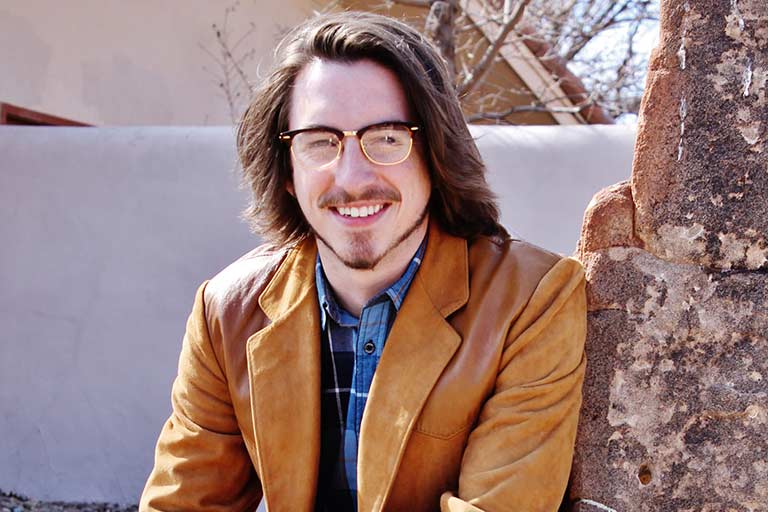 Colton, from Carlsbad, is an ENMU senior majoring in music education with an emphasis in choral conducting. The 22-year-old chose to attend Eastern after graduating from Carlsbad High School in 2012 because of its “superlative music department, attentive faculty, low cost and sense of community.”

Colton Hardy, a student at Eastern New Mexico University, finds nothing more rewarding than surprising others by helping them achieve their most challenging goals.

The senior from Carlsbad, New Mexico, is majoring in music education with an emphasis in choral conducting.

He was born in Hobbs, New Mexico, but his family moved to Carlsbad after he turned five. Colton was raised with his two younger siblings: Mason and Raegan.

His mom, Kerry Odell Hardy, stayed at home to raise them while his dad, Russell Hardy, worked as the director of the Carlsbad Environmental Monitoring and Research Center.

His father worked hard to support the family, which Colton felt "extremely grateful" for.

"I wouldn't trade a thing about my family or my upbringing for the world," he said. "I'm happy to say that my family members are my best friends and biggest supporters."

Colton's parents, Kerry and Russell, are both ENMU alumni.

He chose to attend Eastern because of the "superlative music department, attentive faculty, low cost and sense of community."

The 22-year-old has had a "pleasant experience" at Eastern due to the "overwhelming support."

He hopes to encourage his future students to pursue their goals, as his teachers did with him. He wants to teach them "new skills and abilities, beyond what they think they're capable of.

"Helping others achieve goals they didn't think they could achieve is the most meaningful thing in my life," he explained.

Colton feels he "chose the perfect career" because, as a music teacher, he plans to do what he loves to do daily: helping students succeed.

He says his experience at Eastern has equipped him with the skills needed for his career. He feels "a step ahead" of other students entering the job market because of his "high level of education" from Eastern.

"The level of instruction I received in the field of choral conducting is unmatched by any school within the region," he said.

He also feels he "has the upper-hand" in getting a career immediately out of college resulting from the many "doors the music department has opened" for him during his years here.

"I have met employers and schools throughout the region who compliment ENMU for effectively preparing students for their careers," he said.