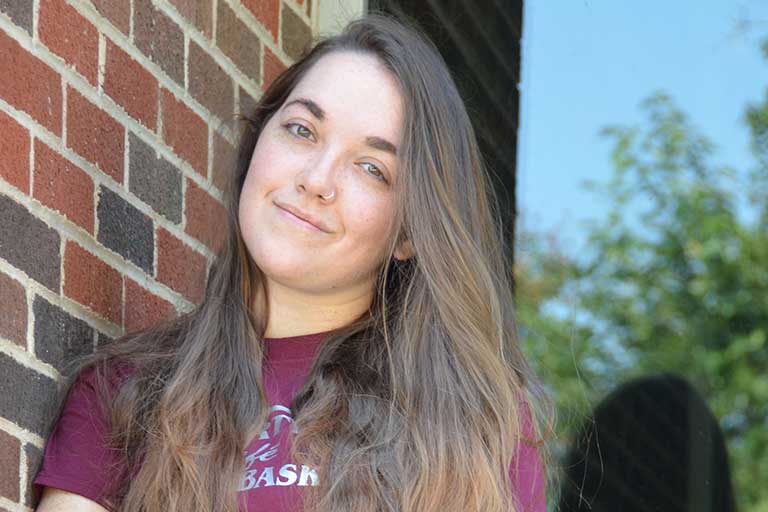 “I am so thankful for the opportunity to study here under the music faculty,” said Sara Proctor, who is pursuing a bachelor’s degree in music with minor in visual arts. “They do care about their students.”

Growing up in Ruidoso, she discovered music as a toddler. She would bang on her father's drums, learning the basics from him. He was a percussionist. Her mother was in church choir, so singing was also introduced to Sara at an early age.

In middle school and high school, she sang in school choir. During the summers of her high school career, she traveled to Eastern New Mexico University for choir camp annually. The camp hosts high school students from all over the state to prepare them for all-state choir auditions in the fall.

There, she was introduced to Dr. Jason and Mrs. Kayla Paulk, ENMU music professors who inspired her to attend Eastern. She quickly realized how invested the university's professors were, challenging students and preparing them to succeed.

When she graduated high school, she had little doubt about continuing her education at ENMU, where she knew she would find what she was looking for in a college.

"I am so thankful for the opportunity to study here under the music faculty," she said. "They do care about their students."

She practices from the early hours of the morning until nearly 10 p.m. daily, taking few breaks, to prepare for her upcoming recital on April 1. Sara gets ready for the big event by researching composers, studying art and music in history and current events, and, most importantly, perfecting her music.

The recital will feature "the correlation between art and music throughout history," with a compilation of her art on display in the lobby. She will perform pieces solo in Buchanan Hall in the ENMU Music Building to entertain attendees. The performance will begin at 7 p.m. and is free and open to the public.

Sara's biggest accomplishments include being cast in several ENMU productions, including "The True Story of Cinderella" (Spring 2016) and "The Pirates of Penzance" (Spring 2017). Along with productions, Sara feels proud of herself for persevering through her degree plan and earning her diploma.

"When I walk across that stage in my cap and gown with my diploma, that's going to be the reason. Because I stuck with it and was able to just keep going," she said.\

She will graduate in May 2017 will a bachelor's of science in music with minor in visual arts.

Her future plans include performing professionally and teaching. She hopes to teach middle school or high school because she understands "that's one of the most difficult times for students. They experience lots of changes on the path to discovering who they are."

When Sara was in high school, she felt "encouraged by my teacher and inspired by music." She wants to help other students through that time in life by encouraging them in the way she was encouraged.

"Music means so much to me. I don't even think I could put it into words," she said.

She says music has helped her become who she is today and continues to help her grow as a person.

"As long as there's music, everything will be okay."