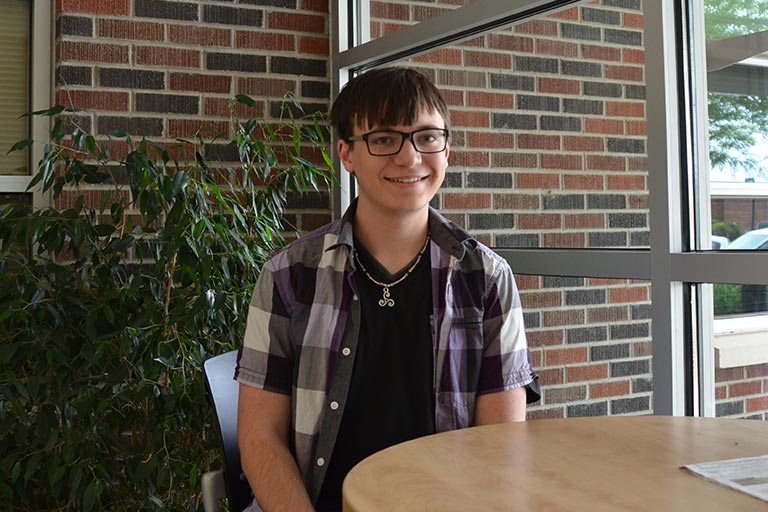 “I feel that the quality of education I am getting from the amazing professors at Eastern, both in the anthropology department and outside of it, is preparing me to thrive in whatever endeavors I attempt in the future,” says Justin Falls, an ENMU student.

Justin Falls felt Eastern New Mexico University was the right choice for him because of its size and individuality of the way students are treated.

He first considered attending Eastern while taking a dual-credit online course in high school in Tijeras, New Mexico, where he is from.

"From the very first discussion board, I felt like an individual in the class. The professor responded personally to each student's introduction post," he said.

The community he felt among peers in the course differed from his experience in other universities' online classes.

He took a campus tour during Senior Preview Day that "sealed the deal." The 20-year-old has attended smaller schools throughout his life, so the thought of a larger school intimidated him. He loved the small size of ENMU.

"I also felt that sense of community I had felt in my online class ring true on campus. Literally, the first thing to happen once my family and I got to campus was President Gamble held the door of the Campus Union open for us and then talked with me until he had to head upstairs to give the opening speech," he said.

The strong sense of community has helped Justin throughout his college career. On the first day of Dawg Days orientation, he came without any friends, and by the end of the day, he found a whole new group of pals.

"That might sound like an exaggeration, but it isn't!" he said. "People here are just so friendly and willing to accept new people into their groups of friends."

Justin is studying cultural and biological anthropology and will graduate in May 2019. After graduation, he plans to apply his degree toward graduate school.

"I feel that the quality of education I am getting from the amazing professors at Eastern, both in the anthropology department and outside of it, is preparing me to thrive in whatever endeavors I attempt in the future," said the junior.

He recommends ENMU to future students because of the size, the experience, and the community.

"Eastern is a truly amazing experience that you won't get at another school," he said.