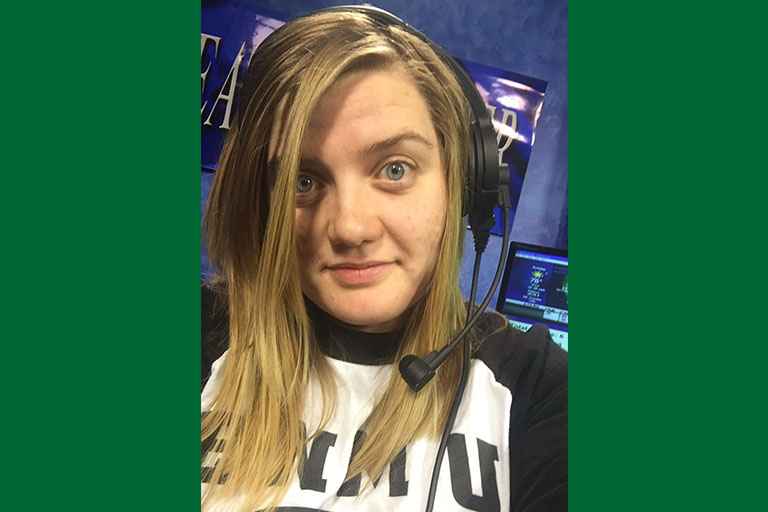 The communications major with an emphasis in broadcast production will graduate in May 2018.

She was born and raised in Albuquerque, New Mexico, with her younger brother. Her dad works for the Department of Energy while her mom works for Fidelity Investments. She enjoyed her life growing up because her family "took vacations as often as [they] could."

She also had a good relationship with her parents.

"My parents supported any decision I made and helped me become the person I am today," she said.

She came to ENMU after graduating from Volcano Vista High School in 2014 because of the size of the University and its interactive programs.

"The communication program at ENMU is one of the best in the state," she said. "I have already made a lot of connections with other news stations and some TV production studios in New Mexico."

She feels confident in getting a job right out of college because her degree from Eastern has prepared her "to accomplish my goals."

While at Eastern, she has worked behind the camera and in the control room for News 3 New Mexico. She is Editor-in-Chief for the show Creative Living and has worked with Ride TV and Production Outfitters in Ruidoso, New Mexico, for the Quarter Horse Derby.

Kaitlin has made the Dean’s List for three consecutive semesters and won three awards in the communication department in spring 2017, including Outstanding Hound Waves Student and Outstanding News 3 NM Student in Broadcast. She also earned first place in video production for her submission in the 2017 Comm Fest.

She hopes to "perfect her craft" and be successful in TV production, so she can get a career in the TV or movie production fields.

"I think going to ENMU has been one of the greatest decisions I have made. There are so many great teachers to learn from. I have to give credit to Allan Crawford, our news director/producer. I wouldn't have been able to get all the work experience I have now without his help," the senior said.

She recommends ENMU to future students because "it is a close-knit school and the teachers really want to help you learn and succeed."

Outside of school, she enjoys music.

"I am trying to teach myself how to play the piano, guitar and ukulele," she said.

After focusing on her career growth, the communications major hopes to eventually get married and start a family.