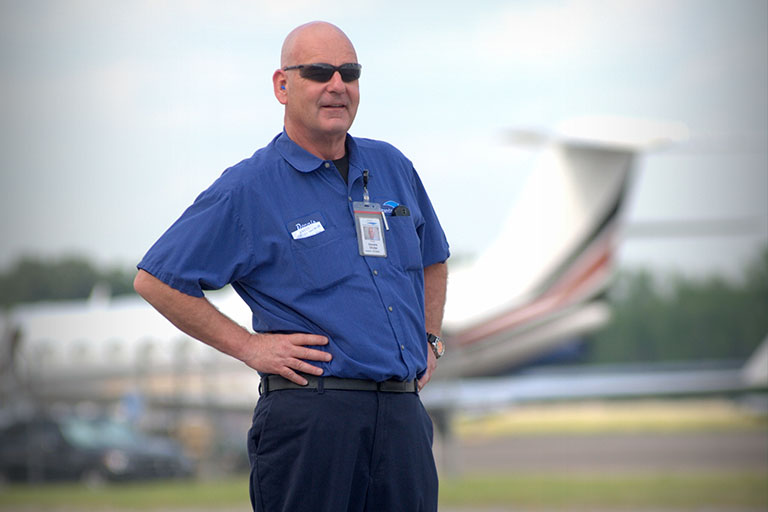 Dennis Gruba on the job as an aviation mechanic.

Dennis Gruba has been an aviation mechanic and crew chief since 1979. He began attending Eastern New Mexico University online in the fall of 2011 to earn his bachelor's degree in aviation science. He will cross the stage with his diploma in hand in December 2017.

"I look forward to walking across the stage, receiving my diploma, meeting my instructors in person and enjoying the campus atmosphere for a few hours," he said.

He was born to Leo and Marge Gruba in Peoria, Illinois, and has seven siblings. He spent most of his childhood in Atchison, Kansas, where his family lived two doors down from Amelia Earhart's childhood home.

Dennis enjoyed being outdoors where he could play along the Missouri River, shooting BB guns, riding bikes and camping on friends' farms. He also enjoyed eating local fresh foods.

His family moved to Palos Verdes, California, when he was in the sixth grade. He was hit with culture shock at first, which later subsided. He took on new hobbies in California, including spending "long, lazy days" at the beaches surrounding his home.

He began working in high school to take girlfriends on dates and "sample international cuisine all over the Los Angeles area."

After graduating from Rolling Hills High School in Rolling Hills, California, in 1978, he applied his dual enrollment credits from high school toward earning his A&P mechanics license from Northrop University in 1979.

He moved to Alaska to seek a slower paced life style at the age of 18. It was in Alaska that he began his career as a helicopter mechanic.

"I fell in love with my job, the natural beauty of our far-reaching travels all over Alaska and Canada in the helicopters, and took up the hobby of photography," he said.

He met his wife and married in Alaska, where they had their first son. They moved to Kauai, Hawaii, briefly for a job, and had their second son there.

He decided to move to Georgia with the boys so his brother and sister-in-law could help him raise the kids.

He later got remarried and "the rest is history."

His youngest son is currently a senior in college and encourages Dennis to "keep plugging away" at his online courses.

"I have dreams of backpacking with my son when he graduates next summer," he said.

He began attending Eastern to gain promotional opportunities in his career because Eastern has a "growing reputation for its aviation program" and an "excellent price."

Two of his coworkers were in the program and another had recently graduated when Dennis first considered taking courses. They spoke highly of the program.

Dennis had also heard great things about Eastern alumni from his customers.

"Several of my customers over the years have reported to me, when I brought up my degree pursuit in conversations, that they have hired ENMU-educated employees and have been very pleased," he said.

He feels proud to be receiving his degree from Eastern to rest some of his sibling rivalries. After a "35-year-long summer break," he will be equal with his siblings, who all have already attained college degrees.

His experience at Eastern has broadened his perspectives. Several of his professors have encouraged him to pursue a writing career. As a result, he submitted an article to a magazine and got published on the first try.

His broadened perspectives have also "made it easier to supervise the newest employees. It has allowed me to easily have very interesting conversations with the corporate flight crews I interact with on a daily basis."