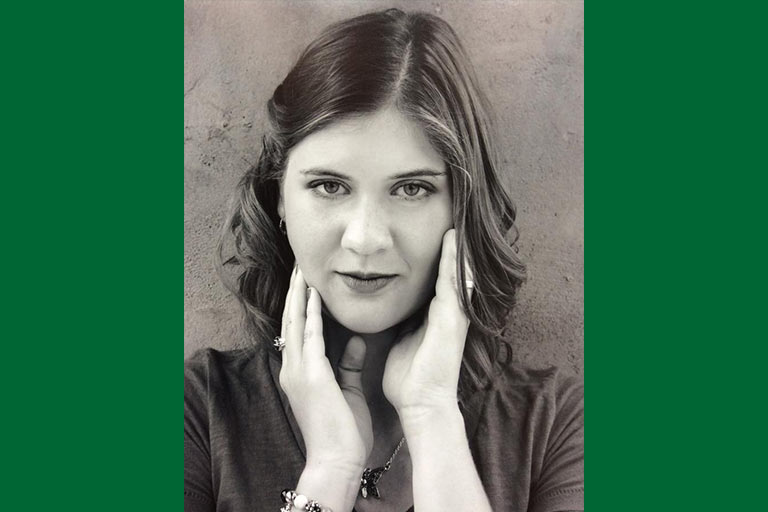 Jennifer Bodley wants to pursue a career in public relations to help people after she graduates in May 2018.

Jennifer Bodley, a communications student, "fell in love" with the Eastern New Mexico University campus after participating in New Mexico Girls State when she was a junior in high school in 2014.

Girls State is a program for high school girls that encourages leadership and citizenship. Participants must be nominated by their high school to attend the week-long event which features a number of political activities, including writing bills, electing group officials and hosting mock-trials.

During Girls State, Jennifer enjoyed Eastern's campus and could "picture" herself attending the University.

She was born in Grants, New Mexico, to Jason and Janis Bodley.  Jennifer is the oldest child in her family. Her brother, Bradford, was born one year after her, and her sister, Kailene, was born two years after her. Both of her siblings study at other universities.

"I guess I'm the black sheep of the family because they are both studying mechanical engineering and I decided to go into communication," said Jennifer, who is majoring in communication with an emphasis in public relations and minoring in economics.

She would like to pursue a career in public relations to help people after she graduates in May 2018.

Her family moved to Rio Rancho, New Mexico, when she was in the second grade. She attended schools in Rio Rancho Public Schools, where her mom still works, until she graduated from Rio Rancho High School in 2015.

When Jennifer was a high school sophomore, her mom earned a bachelor's degree. Her mom is now earning her master's degree while teaching special education in the only pre-Braille classroom in Rio Rancho. Her dad used to work in a plumbing supply house, but now is a manufacturer's representative for various U.S. pipe, valve and fitting companies.

"My parents inspired me to work hard and aspire to lofty goals, even if you don't follow the stereotypical path to success," she said.

The senior has earned many awards and honors during her experience at ENMU. She has been on the Dean's List for four consecutive semesters. She has also earned "Outstanding Student in Journalism," "The Chase Outstanding Student" and first place in the economics category of the 2017 Student Research Conference Poster Session.

"My degree and the connections I have made here at Eastern will open doors. With that initial boost, I know I‘ll be able to prove myself in my chosen profession," she said.

Outside of academics, she has been a member of the Chi Omega Fraternity, for which she served as the Personnel Chair. She has been a staff writer for the school newspaper, "The Chase."

She balances her academics with an on-campus job in the Housing and Residence Life Office and as a Resident's Assistant in one of the University's dormitories.

She was recently promoted to Hall Director for the 2017-18 school year.

The 20-year-old looks forward to marrying her fiancé and "starting their lives together." Although they would like to wait a while, they would love to eventually have children.

"I am so excited by all of the opportunities life has brought my way. I feel as if I'm standing at a crossroads and every choice will take me down a different and unique path," she said.

Her faith is important to her because it makes her life worth living.

"Without faith, nothing that I'm doing would be worth anything," she shared.

Jennifer recommends Eastern to any student who is looking for a school that cares about them.

"I feel as if I hit the jackpot of universities," she said. "It has the feel of a private school with a price tag that won't put me into debt for the next ten years."