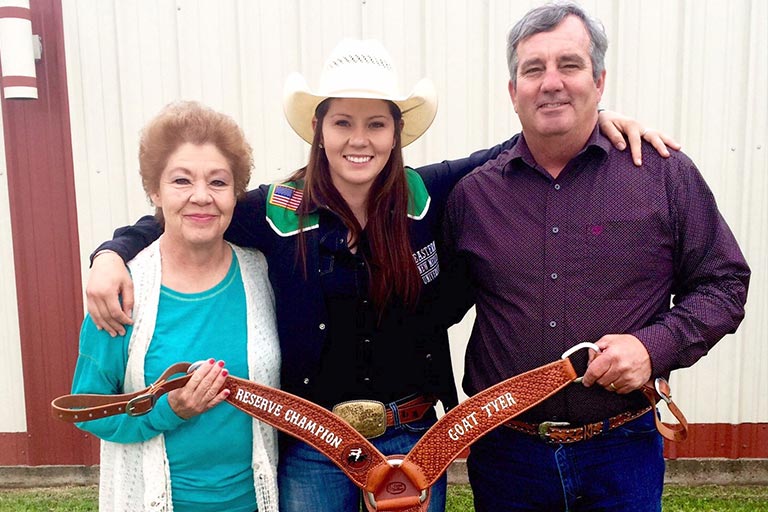 "Rodeo has been my life since I was a kid," said Lindsey Adcock, who is pursuing a master's degree in business administration. "If I didn't rodeo, I wouldn't be the person I am today."

Rodeo has been a part of Lindsey Adcock's life since she was young. Eastern New Mexico University's rodeo team is one of the primary reasons she chose to attend.

She is from Belen and was raised by her parents in the country with her brother. When she was little, her family raced horses, but their passion changed to competitive rodeo.

Her family used to take annual trips to a nearby lake, but as they became more serious about rodeo, they gradually stopped going.

Lindsey still competes while earning her master's degree in business administration, though her brother decided to take a break while earning his master's in engineering.

When the 22-year-old first started at Eastern, she struggled with the transition from high school to college. She attended high school in Albuquerque and Eastern had a very different atmosphere.

"It was hard to get into a new routine with college school work because it wasn't like high school," she said.

The small, "home-like" community at Eastern helped her overcome this challenge and enjoy her experience. She liked the personalized attention she received, which contrasted with previous larger schools she had attended.

Over the years, she has learned the importance of building good relationships with peers and professors, in addition to helping others. She has done volunteer work often with the rodeo team for ENMU.

The graduate student also received a rodeo scholarship all four years while earning her bachelor's degree in business management with a minor in economics. She earned scholarships from the College of Business and Delta Mu Delta, an honor society.

She was on the Dean's List four consecutive years, earned "Student Athlete of the Year" twice and was awarded the "Outstanding Student in Management Award," which was her "favorite memory" in college.

"My future career goals are to be a part of business development or economics in the oil industry or even the agriculture industry," she said. "I would like to work in an area where I can put my economic skills to use."

Aside from school, she has been the goat tying director for the Southwest Region of College Rodeo. She wants to share her passion by teaching young kids how to ride, rope and tie goats because rodeo has guided her life so much. She hopes to continue her pursuit in rodeo for as long as she can and get certified in equine chiropractic and massage.

"Rodeo has been my life since I was a kid," she said. "If I didn't rodeo, I wouldn't be the person I am today. It has taught me many life lessons including how to prioritize, organize, be responsible, be a leader, be humble and be social."

Lindsey has loved her experience learning and competing at ENMU, which is why she chose to continue her education at the university to attain a master's degree. According to the graduate student, learning is her hobby.

She recommends Eastern because "the professors alone make it a wonderful place to be. They care about you and they want you to be successful."

She advises future students to create relationships with people who will push them to become better as a person.

"Without the relationships I made with my professors, I don't think I could've made it as far as I have," she said. "They push me and inspire me to be better, both in and out of the school environment."