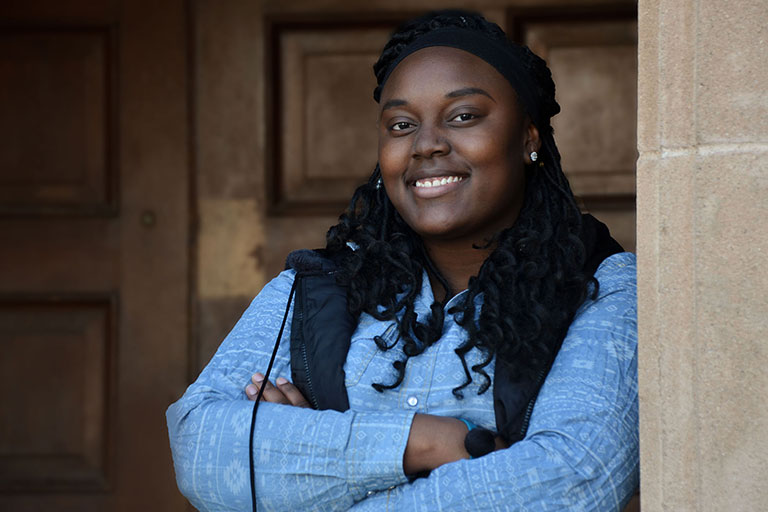 "I hope to create a new platform for younger females that come from the same background as myself," says Kyanna Walton.

Kyanna Walton, a communication major with an emphasis in broadcast journalism at Eastern New Mexico University, plans to stay in the broadcasting industry after she graduates in May 2018 and hopes to make her way up from reporter to anchor.

She would like to have her own talk show. "I hope to create a new platform for younger females that come from the same background as myself," she explained. "I hope to be the example that inspires them to make doubters believe.

"I come from a town where people doubt the kids from my school because we are predominately African-American students. They expect us to only succeed on athletic scholarships, but I've done it academically. I just want to be the example and show them that you don't have to be an athlete to succeed.

She said the talk show would "be like a Steve Harvey show. I want to bring light to people doing good things, give advice on life situations and give away prizes and money to people in need.

"I've always wanted to be on TV!" added Kyanna, who was honored for "Outstanding Student in Broadcast Production for News 3 in New Mexico."

Her favorite place on campus is the Communication Broadcast Center because "that is the place I've learned all of my skills. That has become my second home, and the peers that I do the news with have become a second family.

"The broadcast center has literally taught me everything I know about broadcasting. I had no experience when I came into this program, and I now know how to produce a newscast, conduct professional interviews, run cameras, direct newscast and the list goes on. I can put actual work experience on my resume."

Kyanna, who has been on the Dean's List, said that the professors in the Department of Communication have had a "great impact on me throughout my time here. Dr. Dobson has been a lifesaver on multiple occasions. It doesn't matter what time I pop up in her office, she stops what she is doing and comes to my rescue. I would definitely be lost if it wasn't for her help!"

She encourages her fellow Greyhounds to get involved. "If you don't get involved and put in the time, you will not succeed," she explained. "In this field, you have to be dedicated and open-minded because there are many things to learn."

She recently joined ENMU's student government. She is on the Student Supreme Court and serves as the Student Justice. Previously, Kyanna was the vice president for ENMU's Brothers and Sisters United Organization. She was also the captain of the step team, which is an extension of the organization.

Kyanna's mother works in information technology for Lubbock Independent School District, and her father works in construction in the Lubbock, Texas area. She also has one sister with her five-year-old nephew.

"In my senior year of high school, I visited many college campuses, and Eastern was the only place I instantly felt comfortable once I stepped foot on campus," she shared. "My favorite part about being a Greyhound is belonging to a community that will not let you fail! [The Greyhound community] is truly a family away from home."