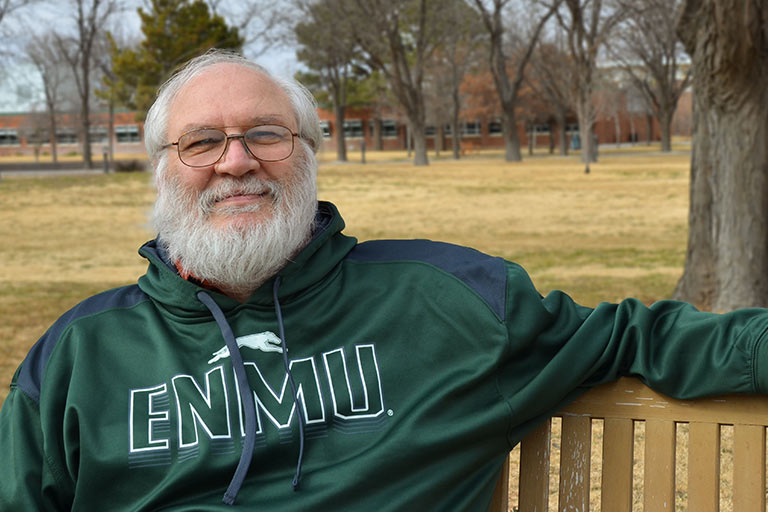 Lonnie Berry, a graduate student in communication, has "had a lot of fun and got a lot of hands-on experience in the field" during his time at ENMU.

Lonnie Berry, a graduate student studying communication at Eastern New Mexico University, is interested in pursuing a career in television production and journalism.

The Greyhound Grad received his bachelor's degree in university studies at Eastern in May 2017 and decided to continue school to obtain his master's degree. He lives in Portales, where he was born and raised, and takes classes online and on campus.

Lonnie has gained some television and journalism experience while he has been a student on campus.  He has worked at KENW, a public television and radio station that broadcasts on campus at ENMU.  KENW offers students the opportunity to get experience in professional broadcasting. They produce stories on sports and other weekly news events on News 3 New Mexico.

During his time with KENW, Lonnie had the opportunity to work closely with Allan Crawford, the director at KENW. "I had a lot of fun and got a lot of hands-on experience working in the field," he said.

His dream is to work in the field of television after graduation. "I love every aspect of television," he explained.

Lonnie has also had his fair share in the spotlight in digital film productions. He has had parts in three movies that were produced by ENMU students.

He has had several professors mentor him while at ENMU. Dr. Patricia Dobson, an associate professor of communication and graduate advisor, Mr. Colt Owens and Mr. Lonzo Lassiter, both instructors in communication, have given Lonnie encouragement and guidance throughout his undergraduate and graduate studies. Dr. Steve Bellin-Oka, an assistant professor of English, influenced Lonnie's interest in writing flash prose and flash fiction, a specific type of creative writing.

"Everyone I work with on campus does all that they can to help each of their students succeed," said Lonnie.

His favorite class was "Beginning Television Production," because "Mr. Colt Owens made the class come alive." He enjoyed learning about television production and enjoyed the interactions between the students in the class, as well.

Aside from his studies, Lonnie is also a graduate assistant on campus at ENMU. He teaches two classes, "Public Speaking" and "Foundations of Writing." In his spare time, Lonnie enjoys spending time with his grandkids, watching television and listening to music.

Lonnie's advice to students seeking to pursue a degree in broadcasting and communication is to be as involved on campus as you can. "There are many opportunities in television [at ENMU]: "The Chase," Houndbytes and student radio. If you want to work in this field, jump in and get your feet wet."