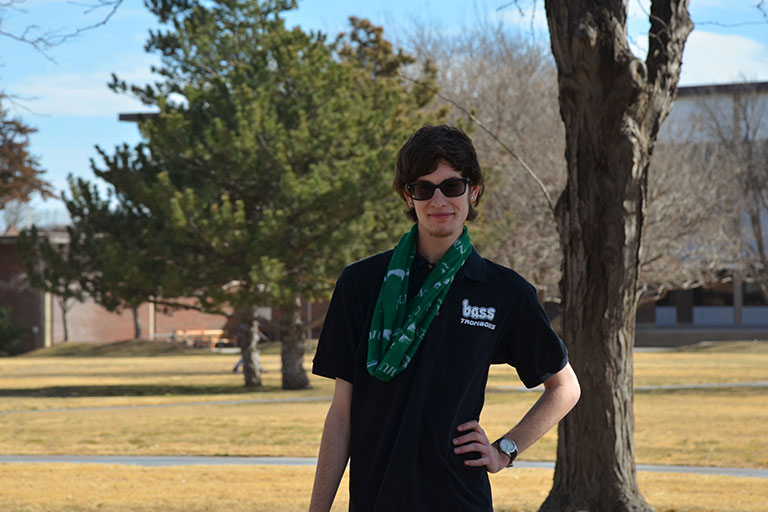 David Bowman chose to study music performance due to a love of music he has had "since elementary school. I have always loved music, so being able to continue my passion here at Eastern is a wonderful opportunity."

David Bowman, a sophomore studying music performance at Eastern New Mexico University, would like to perform as principal bass trombonist of the London Philharmonic someday. He hopes to pursue a career playing the bass trombone.

David chose to study music performance due to a love of music he has had "since elementary school. I have always loved music, so being able to continue my passion here at Eastern is a wonderful opportunity."

He currently plays trombone in the Wind Symphony, Symphonic Band, Jazz Ensemble, Brass Choir and Trombone Studio at ENMU. He also sings bass in the Chamber Singers and University Singers, and occasionally plays with a trombone quartet in Albuquerque.

He was born in Augusta, Maine and relocated to Moriarty, New Mexico, where he was raised with his "beautiful sister" and "kind, caring half-brother." His father was a nurse, and his mother works at Walmart in Albuquerque.

Upon taking his campus tour, David realized the "true beauty of Eastern's campus and the friendly environment, which really solidified my decision on coming here." He noticed some great features about the Department of Music, as well, "with the advanced level of performance and the equal opportunity for performance."

His favorite thing about being a Greyhound is the "tight-knit community." David is part of the Sexuality and Gender Acceptance (SAGA) community and says that he "always feels comfortable and accepted at Eastern. I never feel bullied or harassed in any way here."

He loves spending time in the Music Building because it is a "fantastic facility with incredibly kind and caring people." His favorite class has been "Music Theory," taught by Dr. Mark Dal Porto. The music student described Dr. Dal Porto as a "composing inspiration inside and outside of the classroom, [who] taught me things I never knew about music before, which makes music really open up."

His other mentors at ENMU include Akiko Grey, a lecturer of communicative disorders, Opal Greer, an instructor of English, Dr. Sidney Shuler, an assistant professor of music, and Dr. Bruce Keeling, a lecturer of music.

David offered words of encouragement to his fellow performers: "I suggest that, even if people put you down for wanting to perform, just know that there are magnificent jobs out there for performers. Singers, instrumentalists, there are many opportunities. Don't let anyone discourage your passion for music."

His life is filled with music, and he spends his spare time "practicing and arranging music and enjoying time with friends."