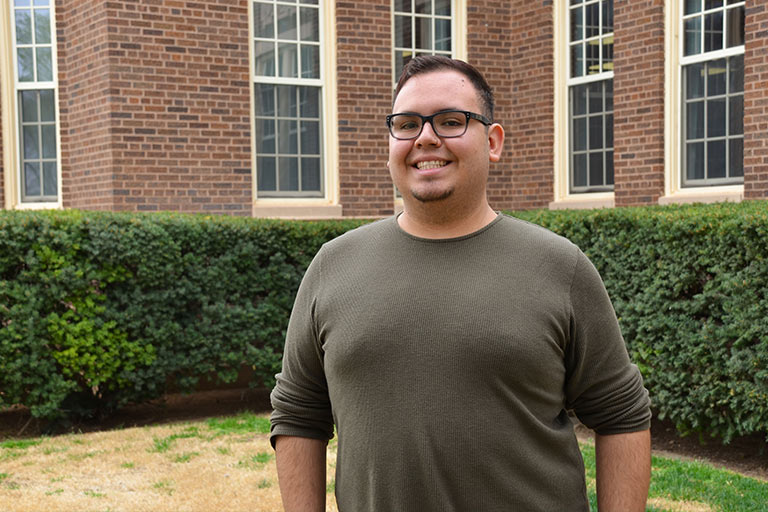 Herman Montoya III, a junior at Eastern New Mexico University, is double majoring in music education and music performance. Herman chose to study music education because of its importance as a universal language.

"Music is truly the greatest of the arts. Music is more than just playing or singing; it is a way to express yourself and be who you want to be," he explained.

Herman would like to become a music educator and teach special education music classes. "I think giving students with disabilities a chance to make and feel music is the most important thing," he said.

Herman is involved in several music-related activities on campus. He is the vice president of the Beta Lambda chapter of Kappa Kappa Psi, a National Honorary Band Fraternity. He is also a member of the Premier ENMU Wind Ensemble, Symphonic Band, Marching Band and the Clarinet Quartet.

Herman has earned a position on the Dean's List every year he has been at ENMU. He has also competed in the Friends of Music Competition every year. He won the competition once and received the "Outstanding Undergraduate in Woodwind Performance Award" this year. He serves as a color guard instructor at Portales High School and works in the Department of Music.

His favorite class on campus is "Communication for Educators (EDF 110)," instructed by Ms. Felice Armijo. "Ms. Armijo has shown the class and me how valuable communication is and how to professionally communicate with others in within our field," he said.

There have been several professors who have played major roles in Herman's education, and even in his decision to attend ENMU.  "Dr. Dustin Seifert was one of the reasons I chose to come to ENMU, as well as Dr. Jennifer Laubenthal. They made ENMU and their music program sound amazing. After coming here, I realized it truly is the best music education and music in general in the state of New Mexico," Herman explained. Other professors that have mentored Herman at ENMU include Dr. John Olsen and Dr. Sidney Shuler.

Herman's favorite place on campus is Buchanan Hall. "I guess you can say I am a true music major. [At Buchanan Hall] I can go and listen to fantastic musicians sing or play and hear guests, faculty and student recitals. It truly is heaven on campus," he said.

Herman's advice to students looking to pursue a degree in music education and music performance is "Practice! Never give up on music. It can be a hard program but we are all one family at ENMU, and we help each other out."

Herman will soon be auditioning for the New Mexico Arsenal Drum and Bugle Corps for a position on their color guard team in Albuquerque, New Mexico, where he grew up with his parents, Herman Montoya Jr. and Faith Montoya.