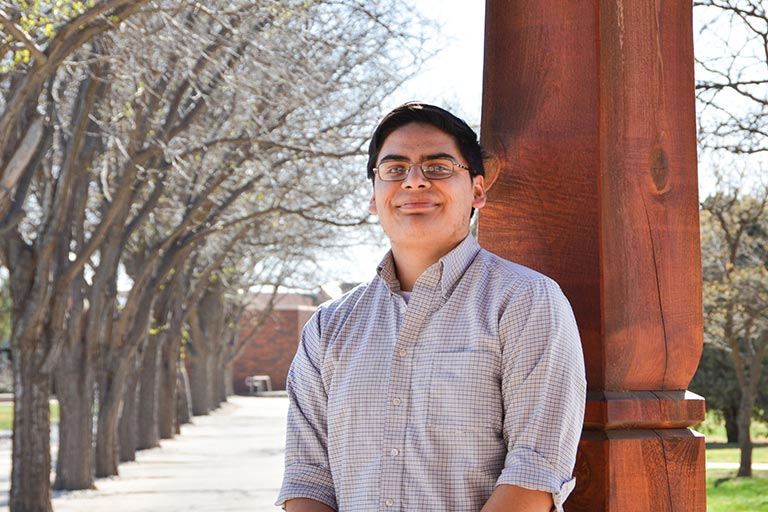 Andres Labastida is double majoring in music education with instrumental emphasis and instrumental performance in euphonium. He plans to graduate in December 2018.

Andres was born in Albuquerque, New Mexico, and raised in Hobbs, New Mexico. He has two younger siblings, Ariana and Lorenzo. His father, Rafael, is a Hobbs police officer and his mother, Annette, works in guest relations and is a full-time student at New Mexico Junior College.

Andres started his journey with the euphonium at age 11. The euphonium is a brass instrument, similar to a tuba. He was inspired to study music and music education in college due to his high school experiences.

"Whether it was a choral or band performance, I have been confronted by audience members congratulating me or the ensemble about how well we have done and/or how it was a highlight of their day," he said. "Those positive messages inspired me to give future musicians that spotlight similar to how my band director did and receive those messages from audience members."

Andres hopes to become a "director of bands at a comprehensive university, big or small, and work with college bands." He would also like to become a performing euphoniumist around the nation.

Ultimately, he hopes to "achieve giving a positive experience for my future students when they are involved with the bands and music in general. It was the bond in my public-school ensembles and the audience members we inspired that inspired me to pass on to my future students. Everyone involved should feel that positive experience I did. I hope to achieve that as a band director."

His decision to attend ENMU was largely due to Dustin Seifert, chair of the Department of Music. "During my time at Hobbs High School, he tried recruiting me, talking to me about ENMU and the Music Department. If it weren't for him, I wouldn't be here."

"Instrumental Conducting II," taught by Dustin Seifert, has been Andres' most influential class. "The professor was a very inspiring conductor and teacher. He and this class are the reason why I love conducting and hope to further study the art."

Andres shared that Dustin Seifert, Dr. Sidney Shuler and Dr. Kathleen Wagner are three professors who have "helped me and mentored me to become the person I am today.

"When it comes to music education and education in general, these three people truly helped me see different perspectives and taught me everything they could. They have been patient with me and others and made it a priority to ensure the success of all their students. Truly inspiring."

His favorite place on campus is the Music Building because the people there are "welcoming and positive. There isn't another place [on campus] where you can always hear music being played at any point during the day or night."

Andres' favorite part of being a Greyhound is "the sense of unity between everyone at this University. It's truly a pleasure to be among this group of students."

Andres offers some advice to his fellow music students: