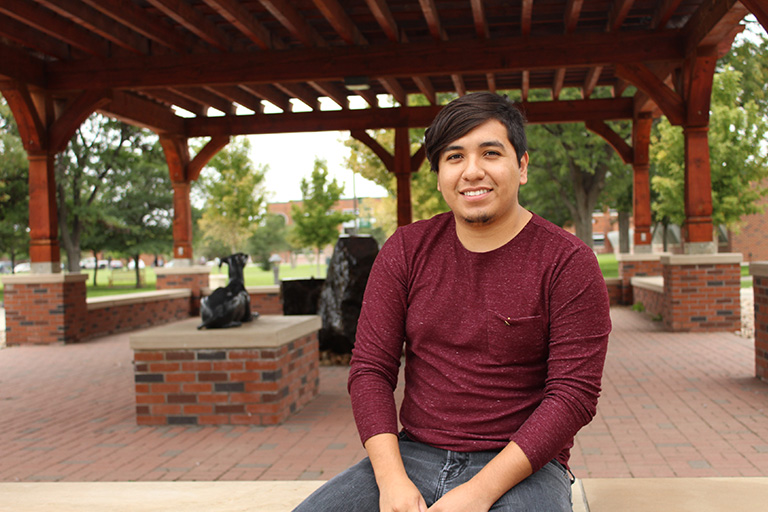 Felix Hernandez, a communication major at Eastern New Mexico University, hopes to make a difference in the world by using his public relations skills.

"I chose this field because of all the opportunities available in non-profit work. I hope to help as many people as I can," he said.

He hopes to focus on health-related non-profit organizations, so that he may work with communication channels to "bring forth issues that are happening in poor countries, as well as educating those who may not know much about these kinds of situations."

Native to Littlefield, Texas, Felix found that ENMU was the right place for him even though he had never heard of the University before.

"A friend had told me about this school and how great it was. I decided to apply. I got in, and I fell in love with the school after a few days of just being here," he explained. "I have never regretted my decision since."

Once he had the first-hand experience in the communication program at Eastern, Felix learned that it was a "great program to be in."

The professors in the Department of Communication, including Dr. Patricia Dobson, Dr. Imran Mazid and Dr. Janet Birkey, have all been helpful mentors to Felix throughout his time at Eastern.

"I've learned so much more about public relations in Dr. Mazid's class because he is so knowledgeable about it. He was always so excited to teach us, and he makes me feel like this is the right career path for me," said Felix.

The ENMU student encourages his fellow Greyhounds to consider choosing communication as a degree to pursue.

"I would tell them that this is a great program to be in. You can do so much after with your degree. You aren't stuck with doing one thing. You can work for a business, an organization or even a person [personal employer]," he explained.

Felix has been involved with "The Chase" student newspaper and the Student Government Association. He is the current vice president of Mu Alpha Nu and is rushing Kappa Sigma Fraternity this fall.

He also served as a Dawg Days counselor. "It was such a great opportunity. Welcoming and showing the freshmen around the University was something I feel helped them a lot," he said. "Seeing their faces light up as we did different activities was such a great feeling; they were starting to feel more comfortable being at the University. Overall, it was a fulfilling experience."

His favorite thing about being a Greyhound is that "we are all so welcoming. Here at Eastern, you will find that this is just like home. You will feel welcomed and feel safe," he said.

Felix is the oldest of four siblings. His mother owns and runs a local restaurant in Littlefield.

He enjoys hanging out with friends and being involved on campus as much as he can.

His favorite spot at Eastern is the Campus Union Building because it's where "everything is happening. It's where I meet up with my friends, grab a drink and just hang out."