ENMU Student Wants to Make a Difference as Speech-Language Pathologist 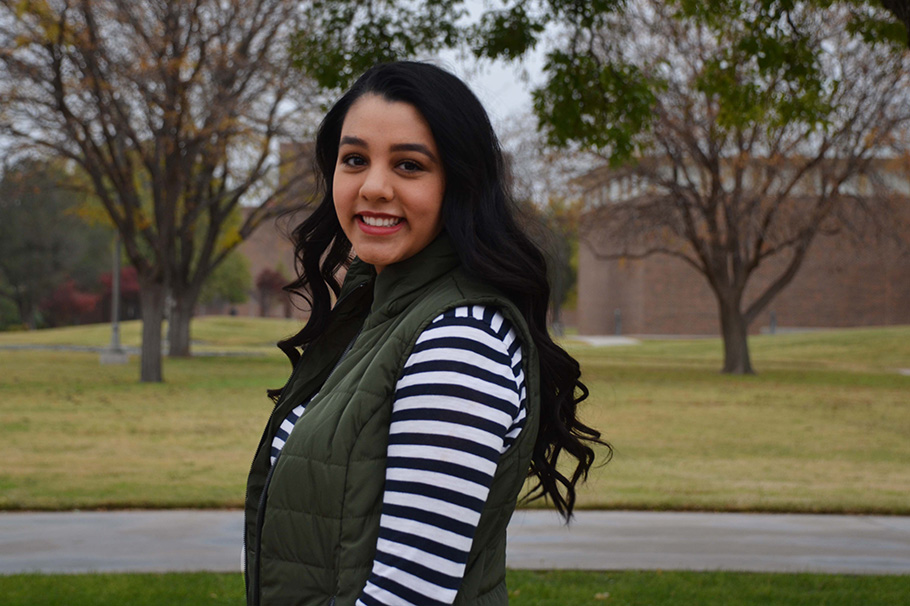 ENMU Student Wants to Make a Difference as Speech-Language Pathologist

Melissa "Mel" Davalos is a student of Eastern New Mexico University seeking a bachelor's degree in communicative disorders with a minor in Spanish. She hopes to become a speech-language pathologist.

"What I ultimately want to achieve once I become a speech-language pathologist is pretty simple: make a difference in people's lives," said Mel. "Once I get enough experience in as many different settings as possible, I would really like to start a private practice and own my own speech therapy clinic."

"Because I speak two languages, I will be able to work with a diverse group of people in both English and Spanish communities," she added.

"I chose to become a communicative disorders major after I met and was mentored by Mandy McDaniel, the speech-language pathologist at my high school," she explained. "During my senior year of high school, I was her aide and watched her transform the lives and confidence of countless students that she worked with. I realized what a grand task being a speech-language pathologist really is and exactly what kind of difference I could be making by helping others. Immediately I knew that being an SLP was what I wanted to be someday," she shared.

She chose to pursue her degree at Eastern because it was a "decently-sized school with a more personal feeling. ENMU was a great fit because the classes aren't too big, the people are friendly, and the academic staff members are always ready to lend a helping hand. Affordable tuition was another reason. It's great knowing that I'm getting a quality education without spending loads of money!"

Mel, a member of the National Student Speech Language Hearing Association (NSSLHA), works in the ENMU Department of History, Social Sciences and Religion as a Spanish transcriptionist. She participated in the 2017 ENMU Student Research and Creativity Conference, where she presented a paper on how the distinct separation of classes, race and gender play into the identity of Mexico.

The Greyhound, who has made the Dean's List every semester since her freshman year, referred to
"Phonetics/Phonology" as her favorite class. "The entire class is pretty much based on learning 'a new language,' which is the International Phonetic Alphabet. I find the challenge of having to memorize the phonetic alphabet and figuring out which symbols to use in transcriptions really exciting and fun."

Her favorite thing about being a Greyhound is the "family feeling" at Eastern. "Everybody has a place in Greyhound country! It's so great to have teachers and staff that truly have your best interest at heart. There's always somebody ready to lend a helping hand."

She acknowledges Rodrigo Figueroa Obregon, assistant professor of Spanish, for serving as her mentor during her time at ENMU. "I really became interested in pursuing a Spanish minor after meeting him my very first semester at Eastern and discussing all the opportunities I could have with a Spanish degree," she said. "Taking his class and having his mentorship has helped me become more confident in my Spanish speaking and composition skills, which is something that will greatly benefit me in my pursuit of a bilingual SLP career."

Mel offered the following advice to students interested in pursuing her field of study: "I would say that this isn't the easiest thing to study, but we grow in the struggle. If you like to work with people and are willing to put in the time and effort before seeing results, then this is great for you."

Her go-to study spot is the Golden Student Success Center. "I enjoy sitting upstairs next to the big windows that look overlook the entire campus, putting on some music and focusing on homework. It's the perfect spot to meet friends, get a coffee and be productive," she said.

Mel was born in Ontario, California, and grew up in Clovis, New Mexico. She attended Texico schools from kindergarten through high school. Her father, Freddy, is a dairyman, and her mother, Eve, is a homemaker. Mel is the middle child of four siblings: Bianca and Crystal (older sisters), younger sister Jasmine and younger brother Freddy Jr.