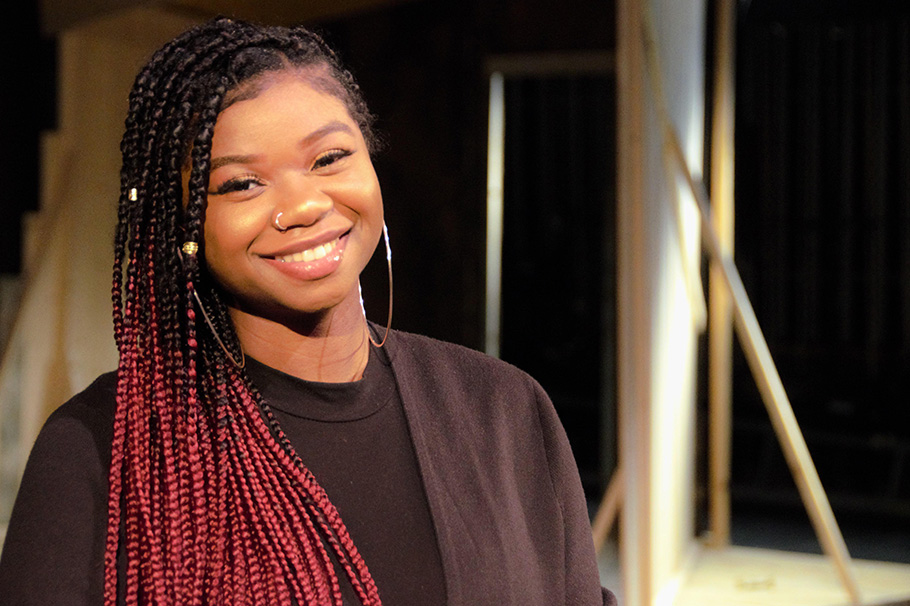 Ebony Baty, a communication major with an emphasis in broadcast journalism and a minor in theatre at Eastern New Mexico University, plans to pursue a career as a journalist and maybe even host her own show.

"My hope is to inspire young women and show them that they can be whoever they want to be," she says. "To see young women choosing themselves first and pursuing their dreams because of something they heard me say or do would be my greatest accomplishment."

Her advice left to future students interested in broadcast journalism is to never lose who you are: "Always put your heart and creative instincts into your work. Individuality is so important in this field because it's so competitive. Just being yourself and letting that shine through your work will make you stand out so much more than you think."

The Greyhound, who has been named to the Dean's List every semester, was a resident assistant in Eddy and Curry Hall for the 2017-18 school year. The senior has been a part of many organizations including the Associated Students Activities Board, the University Singers and the Brothers and Sisters United Organization, an organization where members took part in community service projects and hosted events for other students. Although the organization disbanded, Ebony called it a very "fulfilling experience."

Another community service-centric activity Ebony has been involved with is Eastern in Action, where student organizations come together and do community service throughout Portales, including painting park benches, fixing broken equipment in playgrounds, picking up trash and, as Ebony describes, "just beautifying the city."

Ebony's favorite class is "Senior Seminar" due to what she's learned about what to expect after college. "I feel more prepared than I would have otherwise, especially since I'm graduating a year early this coming May. At 20 years old, I don't feel so afraid to go out into the world now."

Her go-to spot at Eastern is the Campus Union. "I've spent a lot of time there since my freshman year and I've made so many good memories with good people there," she explains.

Her favorite thing about ENMU is the school spirit. The communication major reflects that her energy for the Greyhounds is still present after all the time she's spent here: "I remember coming to Eastern as a freshman being so excited to be a Greyhound, attending sporting events and making friends. I'm happy I've had the opportunity to be here."

She chose to attend to ENMU because her father and older brother had attended. "I felt safer knowing I was close to my family. I also agree with the ideals and standards that Eastern has," says Ebony, who was born and raised in Albuquerque, New Mexico.

Her parents are educators; her mother is the principal at Kirtland Elementary School, and her father is the Dean of Students at Albuquerque High School. Her older brother Michael graduated from ENMU in December 2017.