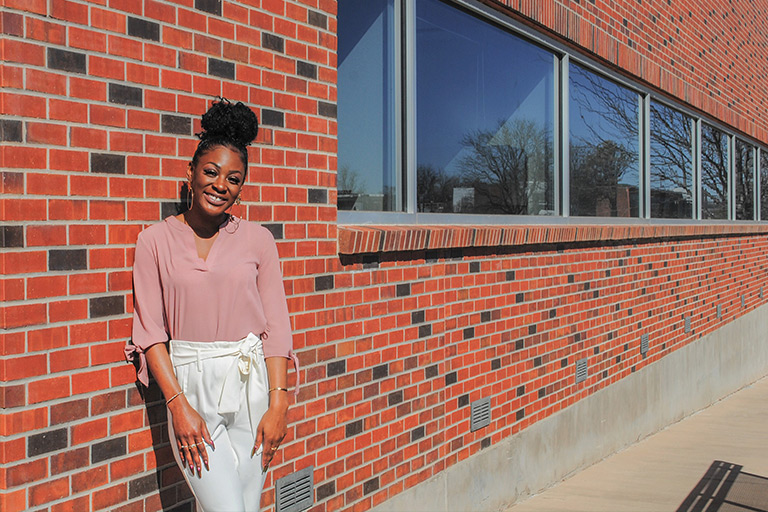 Phoebe Green is a junior at Eastern New Mexico University majoring in communication with an emphasis in broadcast journalism and production and minoring in sports management and theater. She is passionate about sports and theatre, but ultimately wants to pursue a career on camera interacting with others.

"I would like to be a reporter, activist and spokesperson. I want to do something related to broadcasting that can be beneficial to the public. I want to learn as much as possible and use my knowledge to help others and make a difference," Phoebe states.

She encourages other students interested in studying within the Department of Communication to "try it out because this field offers something different for everyone. No one task is the same, so it allows for you to try new things."

Phoebe, who was Miss Black ENMU in 2017, is a news anchor, weather person and graphics assistant in the ENMU Broadcast Center. "I can say I represented my school by being Miss Black ENMU and a reporter for the news," she says.

The Greyhound chose Eastern for its affordable tuition and closeness to her hometown of Lubbock, Texas. She appreciates the teacher-to-student ratio, stating, "I like the small classes that allow for more hands-on work."

Lonnie Berry, one of Phoebe's instructors, has served as her mentor. "He is always available when I have a question and always points me in the direction I need to go when learning new things in the world of broadcast. He helps me stay hands-on; I need that and love that about him," she explains.

Colt Owens, an instructor of communication, has also made a positive impact on Phoebe's education. "He always makes me feel comfortable to learn new things and to ask questions when I need to," she says.

"TV Field Reporting" has been Phoebe's favorite course at Eastern, as it directly related to her career and taught her the process of using a camera and recording footage.

While Phoebe enjoys ENMU's entire campus, she does have a few go-to spots. She spends many hours in the newsroom, making it her favorite place to be. She also enjoys the Golden Student Success Center for its "amazing design and areas for studying." The MaxPAC is another one of her favorite locations as she can do yoga and lift both early in the morning and late at night.

Outside of school, Phoebe enjoys videography, dancing and design. She also competes in pageants and holds the title of Miss New Mexico Congeniality.

Phoebe was born in Temple, Texas and raised in Lubbock. She is the daughter of Tonya Michelle Green and the sister of Clay Green.