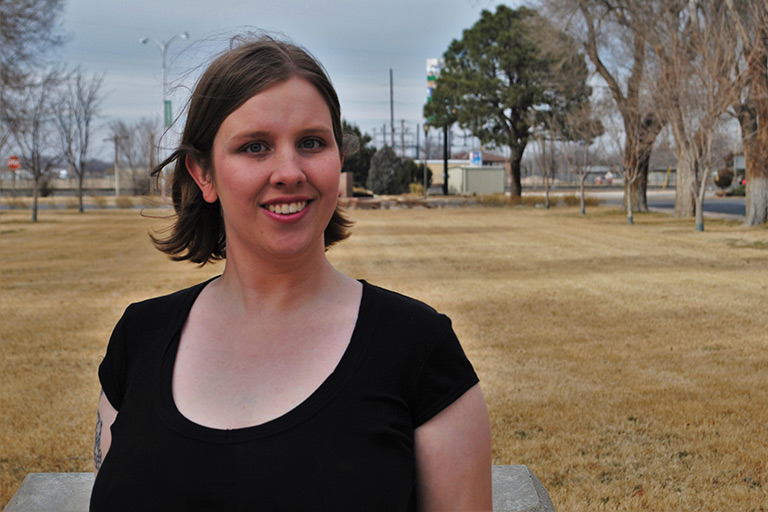 Savannah Fulgham, a student at Eastern New Mexico University, has always loved history. "My father was a history major, so I grew up around it and have always found it fascinating to learn about ancient societies," she says.

She plans to be a historical archivist at either a university or a museum.

The political science and history double major says she chose her political science degree because it allows her to "further develop my critical thinking skills and lets me analyze power and its uses on an individual and group level."

But why history? Savannah explains, "Considering political science often examines historical events and is such a big part of history, it was a natural fit to be able to double major. Originally, I wanted to go into communications to become a radio DJ, but then I rediscovered my passion for history and got some encouragement to pursue it from a close friend."

"Dr. Acheson-Brown has always encouraged me to pursue the more difficult topics to research," Savannah explains. "Overall, he's been a wonderful professor who is always open to questions even if they are hard to answer, and he's always willing to have discussions with an open mind and a willingness to understand."

"Dr. Brust has helped me improve my argumentation skills. Dr. Elder is always willing to help me grow in my curiosity about history, answering my many questions and point me down the right track," she says. "Dr. Balch-Lindsay, whom I only had the pleasure of attending one class with, inspired me with her story to pursue graduate school and to succeed in my efforts."

Savannah plans on going to graduate school for a master's degree in either history or library sciences.

Her favorite class at ENMU so far was "Contemporary Political Ideologies," because it challenged her to look at "all of the ideologies in the world with a critical mind and be able to examine them."

Savannah has some advice for future history and political science majors: "Always try and be learning something new, whether it is about history or something that plays into it. Being able to draw on multiple sources of knowledge can give you a leg up in your studies."

She chose to attend Eastern to be closer to her grandparents, who lived in the area and helped raise her in the early years of my life. "I wanted to go back to the roots of where I was born so that I would get to experience it as an adult," she explains.

Savannah says that being closer to her extended family has made all the difference in her ENMU experience.

"I was drawn by the small class sizes and the fact that it was more affordable and cheaper going to Eastern than it was going to a college in Texas with in-state tuition," she adds. "I enjoy the closeness of the community [at ENMU]."

Savannah works on campus in the Department of Languages and Literature as an office assistant. She also worked in the Special Collections Library, the Purchasing Office and the Dr. Antonio "Tony" Gennaro Natural History Museum.

Her favorite place at ENMU is the crossroads area by the time capsule. "It holds a significant amount of meaning to me because in the evenings, when my husband, David Sanchez, and I were dating, we would often walk through it," she explains. "Eventually, that is where he proposed to me."

Savannah was born in Albuquerque, New Mexico before moving to McCook, Nebraska at the age of four. In the seven and a half years that she and her parents, Troy and Michelle, lived there, her sister, Makenna, and her middle brother, William, were both born. The family then moved to Killeen, Texas. Savannah's youngest brother, Luke, was born during her senior year of high school. Her father is a law enforcement detective, and her mother is "currently the best stay-at-home mom."